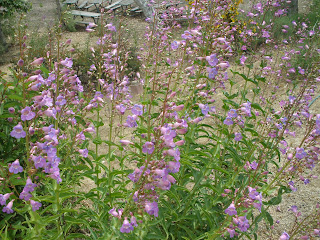 In his last post, The Militant introduced you to the wonderful world of California native plants. But where can these fantastic flora be found? They're not as rare as you think they are! One day, an operative took The Militant for a walk around the neighborhood and pointed out various native plants growing in people's front yards. It was like another world opened up to him.

But instead of The Militant pointing out where his neighborhood is (and thusly blowing part of his cover), here are some places around Los Angeles and the Southland where you can be in the presence of native plants -- and true to Militant fashion, they're all 100% free to visit!

Theodore Payne Foundation Nursery & Gardens, Sun Valley - Theodore Payne (or T-Payne for short...ay) was an Englishman in the late 19th century who was so fascinated with California native plants, he moved here, only to discover that agricultural development in Southern California was depleting the land of its native vegetation. So, as part Luther Burbank, part Johnny Appleseed, he dedicated his life to preserving native plants, even going up into the hills and fields to collect seeds. T-Payne created native plant displays in Exposition Park, Cal Tech and Descanso Gardens and owned nurseries in Downtown and in Atwater (before it became a "Village," yo). T-Payne retired and died in the early 1960s, but The Theodore Payne Foundation was formed to carry on his work. In Sun Valley, the nonprofit operates a nursery where one can buy numerous varieties of potted natives and a living native plant environment growing in the hillside (you can even just drop by and have a picnic -- there's even tables there). They also conduct classes and native garden tours.  They should be the first place to check out if you want to learn about native plants!
Vista Hermosa Natural Park, Downtown - The Militant covered its opening back in '08, revealing a new place to get a killer Downtown skyline view. But this 10.5-acre plot of land, originally intended to be part of the LAUSD's beleaguered (isn't that being redundant?) Belmont Learning Center complex features the scent of sage and other native varieties. It's run by the Santa Monica Mountains Conservancy for the specific purpose of re-introducing native plant environments in urban Los Angeles.

Griffith Park - Toyon, chamise, sage and other chaparaal plants grow here in the eastern end of the Santa Monica Mountains. Hop on any of the 4.310-acre park's hiking trails and you'll see them. In some cases, they've been growing there just as they have in the days of the Tongva.

Bernard Field Station, Claremont - This 86-acre wildlife peserve along Foothill Blvd on the campus of The Claremont Colleges exists for both conservation and study, with both wild and human-planted native growth in a coastal sage scrub environment. As a bonus, native birds, reptiles, insects and wild mammals can be seen roaming the grounds.

Ballona Wetlands, Playa Del Rey - Even before he learned about Tongva culture, The Militant was downright outraged at Steve Soboroff's Playa Vista development taking over our last vestige of natural wetland in Los Angeles (apparently bad ideas aren't foreign to him...). Having biked the adjacent Ballona Creek bike path for nearly two decades, The Militant couldn't help but try to mentally block out all modern development and imagine taking a look back in time. Eventually, he did learn that this was the Tongva village of Saangna, which also included a large ancient sacred burial ground which was discovered during Playa Vista excavation.

Others have recently listed traits and criteria on being a true Angeleno -- well, The Militant believes that you can't be a true Angeleno without visiting the Ballona Wetlands and appreciating the (relatively) untouched serenity that have lasted for centuries. Developments can always be built elsewhere, but the wetlands are irreplaceable. May this land be disturbed no more!
Commandeered by Militant Angeleno @ 11:30 PM

Thanks A Lot For Sharing This With All Of Us You Really Know What You Are Talking About! Bookmarked. Judi Bola Terbaik Asia Kindly Also Visit My Site =). We Could Have A Link Exchange Contract Between Us!