U Can't Miss This - The Lyrical Map Of Los Angeles (Stop...Hammer Time!) 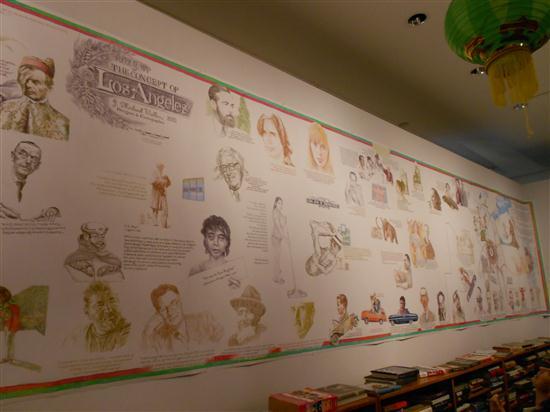 Last week, The Militant stealthily slipped into Westwood's Hammer Museum to attend a cartographical conversation by Los Angeles In Maps author Glen Creason and artist J. Michael Walker, best known for his All The Saints In The City Of Angels artwork based on saintly city street names. 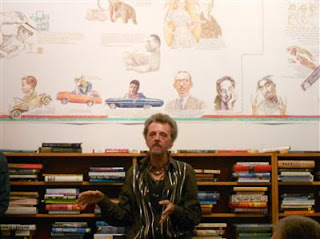 The artist took his geographical themed creations to another level by creating "City in Mind: a  Lyrical Map of the Concept of Los Angeles" a 23-foot long colored pencil-on-butcher paper illustration of a Los Angeles map highlighted by quotes and drawings of literary and lyrical figures through the ages, centered on various written perspectives of Los Angeles.

Everyone from Fr. Juan Crespi to Raymond Chandler to Joan Didion to Octavio Paz to Charles Bukowski to Jonathan Gold to Tupac Shakur gets quoted here, in a horizontal swath cutting from The Eastside to The Westside, which, incidentally, was direction the City proper expanded. 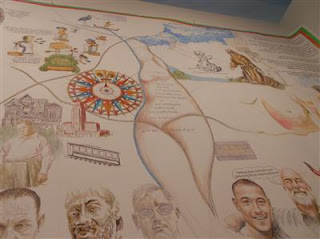 The illustration, which the artist contends, "still isn't quite finished yet" (there's a good amount of empty real estate and some more quotes to add), involved months of his own literary research, but only took days to draw.

Obviously something like this is MILITANT APPROVED! You must check this thing out! The Militant commands you!

The map is on display until Sunday, October 9 (which is also a CicLAvia Day) as part of the Eastside-based Libros Schmibros' temporary Westwood bookstore, located in the lobby of the Hammer, also until 10/9. There are also a number of interesting lectures that Los Angeles geeks like The Militant and some of you reading this may or may be interested in, so check their site for the full schedule of events. The temporary bookstore is FREE to visit and does not require museum admission.

The Militant hates Westwood traffic with a passion, but fortunately, Metro's Rapid Line 720 stop is right outside the Hammer's front door, so save yourself a headache or two and load up that TAP card!
Commandeered by Militant Angeleno @ 5:28 PM