Los Angeles might frequently be dismissed as a "desert," but that's not actually accurate. The Militant believes people who tend to use that term are usually transplants want to secretly push a negative image of emptiness, of lifelessness, that there was nothing here to begin with, and therefore this place means nothing.


The truth is, Los Angeles is in a Mediterranean climate zone that is shared by only a handful of places in the world: Southwestern Australia, Southwestern South Africa, the central coast of Chile and the coast regions of the Mediterranean Sea. Is Cannes, France also considered an "empty, lifeless desert?"

The other truth is, before colonization, all of California was a lush paradise filled with an amazing biodiversity. In an example of life imitating art, The Spaniards named this part of the world after a paradside-like island of the same name fron a 16th century novel called Las Sergas de Esplandián by Garci Rodríguez de Montalvo.

Many of the indigenous plants are gone, either supplanted by introduced species from other parts of the globe or outright torn out by human development. But in our remaining wetlands, meadows and hillsides, they prosper. And thanks to contemporary issues like water conservation and ecological sustainability, California native plants are making a comeback in our parks and frontyards.

Nearly all of our native flora are drought-tolerant since their growth cycles are compatible with our dry, rainy and blooming seasons (see, we do have seasons after all). They need no fertilizer since they know the soil. They also prosper by growing roots deep enough into the soil where moisture or a water source is always present. And best of all, they are a source of food, shade and shelter for some of our native insects and animals, being a foundation for our native ecosystem.

The plants in this post are but a sampling of the many varieties of So Cal indigenous flora and is by no means a comprehensive guide. But they are common and/or interesting enough for you to take notice when you spot them.

White Sage - This was perhaps the most important native plant to the Tongva and neighboring tribes. Its leaves are burned as incense for ceremonial uses, which is why white hippie/new age types like to rape and pillage the plant in the wild and sell for a profit as smudge sticks (capitalism, yaaaaay). They also provide high medicinal value (usually drunken as a tea), curing everything from coughs to colds to stomach aches. The greenish-grey leaves give off a strong, distinct scent when rubbed. In the Spring, tall flower stalks come from seemingly out of nowhere and bloom, making it a favorite nectar source for bees -- it's also known in its Latin scientific name as "bee sage."


Cleveland Sage - Named after plant collector Daniel Cleveland, this sage (pictured at top of the post), popular with butterflies and hummingbirds, as well as California quails who seek shelter in its bushes, has an etremely pleasent, minty scent from its small green leaves (rub your fingers on one and take a sniff...ahhh). Its purplish-blue flowers bloom from orb-like stalks in the Spring and Summer. Got bedbugs (you know those bloodsucking parasites that East Coast people bring with them)? Take a bunch of Cleveland sage leaves and sprinkle them around your beddings. The sweet scent you smell is downright overpowering for them little critters, and they are naturally repelled by it. NATIVES FTW!

Toyon - This hillside bush with dark, leathery green leaves and spiny edges are common sights in chaparral environments like the Santa Monica Mountains. If you hike Runyon Canyon or Griffith Park, you can't miss them. In the winter, they sprout berries (edible, but not very tasty, unless you're a deer or a bird) and resemble a holly. In fact, the toyon is also called the California Holly, and was the origin of the 9-letter name given to a famous landmark sign, the entertainment industry and an entire community that was built over the Tongva village of Cahugna. For more toyonic talk, check out The Militant's post from Christmas of last year.

Chamise - One of the most common chaparaal (the term "chaps" refers to the sturdy pants one must wear when navigating through the typically spiny plants in that environment) flora, this plant is also highly flammable during fire season due to its resin content. But like all natives, it adapts well to its conditions. In fact, fire is a part of its life cycle and not only germinates following a conflagration, but releases its own toxins into the soil to prevent competitor plants from growing on its turf. This plant is straight up gangsta!

Manzanita - Not just a street in Silver Lake, but a type of plant of varying sizes known for its twisty branches, reddish hard wood trunks, bright floral blooms and berries that resemble tiny apples (hence its name in Español). The Tongva resourcefully used its leaves as toothbrushes, made cider from the berries and tea from its bark to cure stomach maladies. They also used its wood to make utensils and tools. Butterflies and hummingbirds can't get enough of their flowers.

Desert Agave - This succulent plant that's grows primarily in the deser region can also be found in the Los Angeles area, in the more drier corners. This spiny plant lives for about 10-20 years and only flowers once in its lifetime, and then dies. But throughout its lifespan, agave "pups" will spring up from the ground, seemingly multiplying itself. Although agave is associated with tequila, this isn't the same variety that produces the booze (it's possible though, but not very commonplace). But the Tongva and the neighboring Cahuilla tribe used it for food, rops, utensils, weapons, soap and medicine.

Oak  - The Coast Live Oak and the Scrub Oak most common varieties 'round these here parts. These trees were (and still are, relatively speaking), still numerous in the region, enough that places like Encino (Español for oak) and Thousand Oaks were named after the trees. The trees also grow acorns, popular not just with our native squirrels, but with the Tongva, who used them in multiple food uses. Aside from eating the acorn nuts, they also ground them and made them into flour, which was made into baked goods. 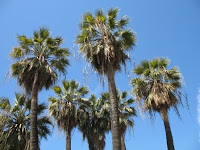 California Fan Palm - Palm trees are a Los Angeles icon no doubt, and developers and city planners were eager to plant them Like All Over The Freaking Place back in the 1920s-1940s. About half a dozen types of palms can be found locally, but only one is actually native: The California Fan Palm. It's actualy native environ is the lower desert region, where they grow in groves next to water sources. Places like Twentynine Palms and Palm Springs were named after these trees, but a few could be found in the Tongva nation. The Tongva's neighbors to the east, the Cahuillas (a.k.a. The Iviatim), used the fruit of the palms for food and flour, and used the leaves for sandals, baskets and roofing material.

California Sycamore - This hardwood tree is known to grow near rivers, streams and foothills. It's also a deciduous tree, which means its green leaves turn orange in the fall (You East Coast people who constantly bitch about us "not having seasons" should cream in your pants just for that). Sycamore Avenue in Hollywood and Aliso Street in Downtown were named after the tree. And of course, our stately local sycamore was revered by the Tongva, most especially in center of the village of Yangna, especially one 400-year old specimen which you may or may not have heard of before.

If anything, The Militant noticed that our native plants share much in common with its native people: Deep roots, low maintenance and thrive best in this climate!

Having trouble spotting native plants? The Militant will show you where to find them in his next post!
Commandeered by Militant Angeleno @ 3:18 AM

Thank you so much for this California native plants advertisement! Glad someone else finds that "I miss the seasons!" whine as tiresome as I do. We have perfectly discernable Mediterranean seasons, and if you didn't want that why did you move here? Frankly, I think all those east coast "fall colors" are baroque and vulgar.

Actually the myth of Los Angeles as a desert was one carefully nurtured and propagandized by LA Times Publisher Harrison Gray Otis of the LA Times to coax voters into supporting the Owens Valley aqueduct bond. The Times continues to regularly perpetuate that falsehood today.

Cleveland Sage is about as native to Los Angeles as the San Diego Padres are. It is heavily used in the native plant trade, probably because of some people like it's fragrance (it's too Kool-Aid smelling for me.) In the wild it barely makes it into Southern Riverside County and the Southeast tip of Orange County. There are many cultivars, and it's in nativish gardens all over. Maybe you're thinking about Purple Sage, which is a real LA native.

Same with the "LA has no seasons" nonsense. If you can't tell that the seasons are changing unless it snows on you, you probably ought to go back to where it snows. :-)

Oh, and Will - I've read a lot of the LA Times coverage during the run-up to the aqueduct bond issue vote, and it didn't really seem to me that Otis was pushing the "LA is a desert" myth.

On the contrary, when the Times was speaking in its editorial voice, it often contrasted the "worthless desert lands" of the Owens Valley with the "fertile fields" of Los Angeles

(Especially when Inyo's Congressman Smith was advocating severely limiting LA's share of the river, keeping the 'surplus and floodwaters' for irrigation of the Owens Valley.)

About the only mention of 'desert' that I recall was when they were quoting the local clergy waxing florid about "making the desert bloom."

(Oh, they did sometimes refer to the unirrigated areas of the Valley as "the desert sections of the San Fernando Valley" - but never the city proper.)