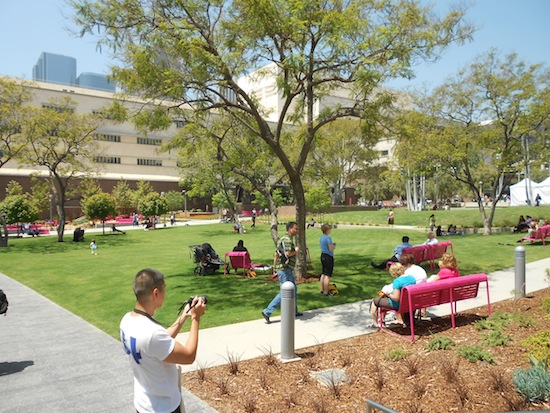 When The Militant was a wee young Lil'Mil, and hadn't yet discovered his great City in its entirety, his only exposure to Los Angeles' Civic Center was during KABC's Eyewitness News when Dr. George Fishbeck read off tomorrow's forecast, listing the temps for Van Nuys, LAX, Torrance, Pasadena, Santa Ana and the "Civic Center."

Mama Militant explained to Lil'Mil that the Civic Center was some place in the middle of Downtown Los Angeles, near where City Hall was.

Not yet aware that the Los Angeles Civic Center is the largest government center outside of the Washington D.C. Beltway, he envisioned a large, linear park next to City Hall with a steel tower some 30 feet high that had a thermometer on it that told everyone what the weather in Los Angeles was  (Lil'Mil also thought that Mayor Bradley was the guy who, with the flick of a switch, turned on the City's streetlights every night, because that's what the mayor does). 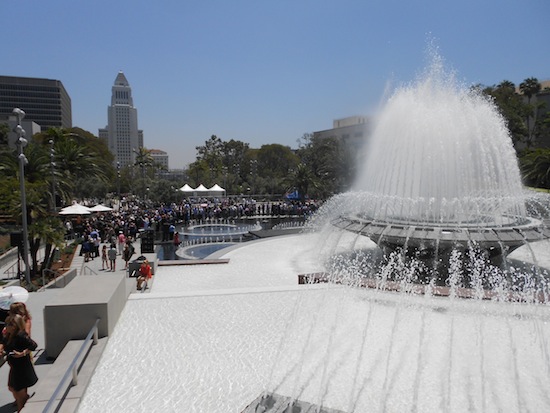 Well, more than 30 years later, though the Civic Center Thermometer Tower still exists only in Lil'Mil's imagination, his vision of a large linear park next to City Hall did come true on Thursday with the opening of (...at least half of) Downtown Los Angeles' new $56 million Grand Park (the rest opens in October).

The Militant was there on Thursday noon with a program presented by the Los Angeles County Supervisors, making the usual grandiose statements about the importance of parks as politicians do. Then there was an Olympic opening ceremony-style music and dance performance number which involved kids in colorful costumes, puppets, people on stilts and blue people dressed as if they were in a luge competition (again, the Olympic connection, a day before London 2012, in fact).


Actually the Blue Luge Group was pretty cool, doing an interpretive dance to Mariachi music around the Arthur J. Will Memorial Fountain (which has actually been there since the 1960s and not a new element of the park).

Despite all the hoopla, this actually isn't a new park, but a re-branding and renovation of the Los Angeles County Mall, which has been there, bookended by the Stanley Mosk Superior Courthouse and the Kenneth Hahn Hall of Administration for almost 50 years. Unless you're a Los Angeles County employee, or Joseph Gordon-Levitt dancing with a bunch of people to a Hall and Oates tune, you might have never been there before. The only actual new elements are the relatively small green space towards Hill Street, the public wading pool in front of the Will Memorial Fountain, some pink benches and a bunch of new plants, wading in a sea of mulch. 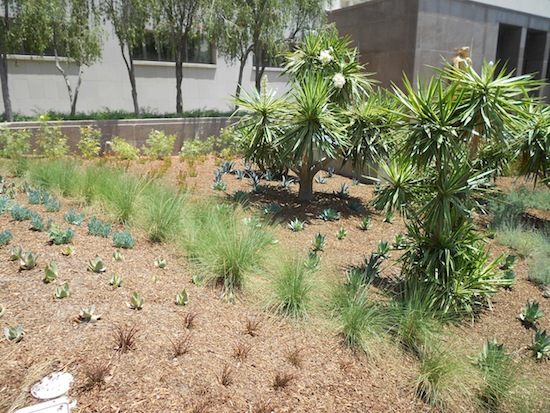 Many have wondered whether this park will be a sign of DTLA rebirth or an Epic Fail, whether it's a park made for rich gentrifiers or a true park for the people (When you really think about it, parks like MacArthur Park and Lincoln Park were originally built for their respective once-wealthy neighborhoods). 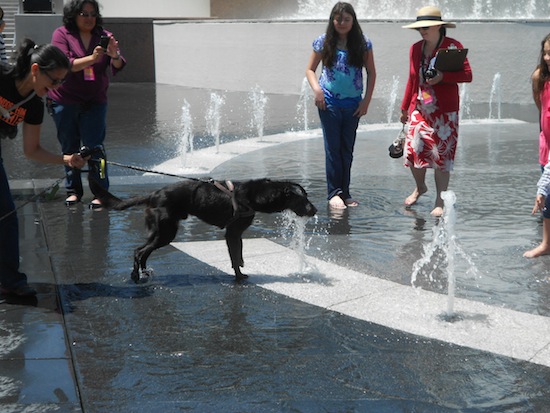 But after the County Supes left from their barefoot photo-op in the wading pool, and after the media had packed up their cameras, a bunch of children, all visually representative of Los Angeles, ran around in the wading pool, giggling and screaming with delight, some touching the water spilling over from the larger fountain, others playfully kicking water towards their parent's shins. One woman, walking a trio of dogs next to the wading pool, stopped to talk to someone, while her largest dog ran towards a column of water and repeatedly took sips from it. 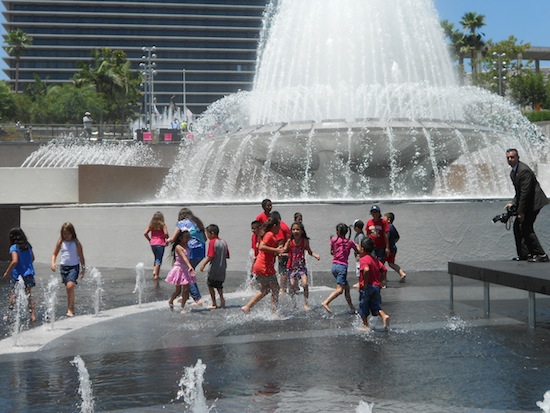 As The Militant sat down in Grand Park, with the cool water mist of the fountain wafting towards him in the breeze, he finally understood what this park really means for Los Angeles. See, those kids don't think about economics or politics or demographics. They're only concerned with what's in their imagination. Except unlike Lil'Mil, that magical park in the Civic Center is for real.

Wonderful recap of the old and new (with great pictures & video). Was really bummed I couldn't make it. Having worked for the Music Center for a number of years, I knew the park well (it had the only Starbucks in walking distance). In fact, think I may have a picture of the filming of the Power Rangers in that park. Thanks again!

victoriabernal: Well the park is open now so come on over anytime! :) There's a bunch of events going on during opening weekend...there's even ads on the radio for it.

Epic fail. 56 million dollars for a splash pool and some plants. LA's public projects - from parks to light rail and beyond - are just so half assed it's an embarrassment . Just another huge opportunity wasted.

We enjoyed the new redone park on the way to Disco Dancing lesson at the Music Center Pavilion Friday night. (Which is free if you're interested - there are other dance nights.) Very pleasent walk up from the Civic Center Red Line Metro to the Plaza. Looks really good at night!

Recommend this as a plesent summer stoll.