The most interesting thing about the new Metro Orange Line extension is neither buses nor bikes...but pedestrians. 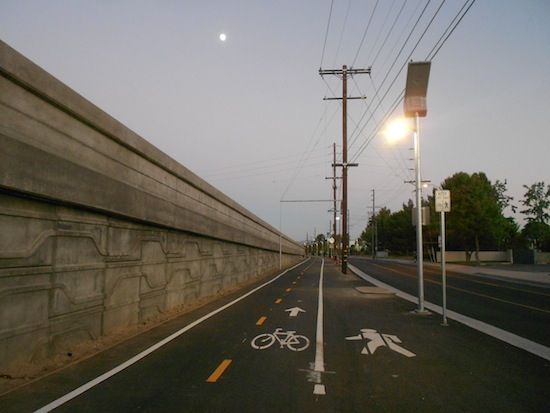 The (M) TAP card $5 daypass is a dangerous thing (in a good way). Provided one has the time, one can go off on an adventure on our transit system, which is exactly what The Militant did on Sunday evening.

Having not yet ridden on the new 4-mile extension of the (M) Orange Line from Canoga Park to Chatsworth, The Militant, bike in tow, set off on an 18-mile trek from North Hollywood just to check it out.

The new north-south bus rapid transit extension, which he had passed by on car just prior to its opening, looked pretty much like the 7-year old east-west line it was supplementing, what with park & ride stations, and a little urban renewal, eliminating some rather blighted, neglected spaces. 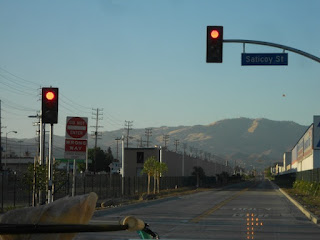 The only real unique things about the new extension was the sultry view of the radio tower-topped Oat Mountain, with the setting sun casting sexy shadows of its topography (as sexy as the Santa Susana Mountains can be), and the large, sweeping overpass at the end of the line that runs over the Amtrak/Metrolink/Union Pacific railroad tracks and lands the buses at the Chatsworth depot.

After poking around the area a bit and watching a northbound Pacific Surfliner train roll by, The Militant wanted to try out the bike path portion of the Orange Line.

After finally finding it east of the tracks off of Lassen, The Militant rode on south. It was nice; at one point, you had Canoga Avenue for the cars, a pedestrian path, the bike path, the Orange Line bus right-of-way and the railroad tracks, all running parallel to each other. There was a nascent plantscape with native drought-tolerant plants, and a faux creek with stone-lined bioswales running between the busway and the bike path.

There were few other cyclists at this point. What he did notice the most...were the pedestrians. 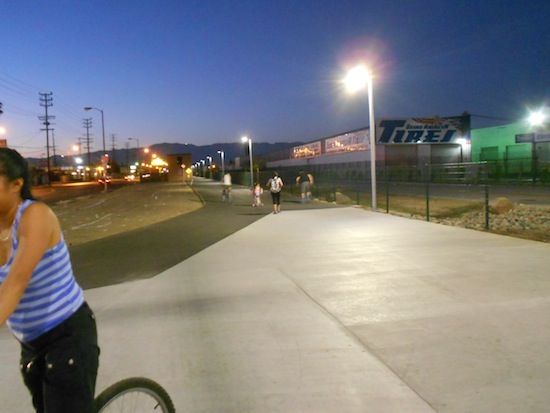 First he saw two. Then a group of four. Then a whole family of five, Then people walking dogs, then strollers. It was like a virtual boardwalk in the land-locked SFV. Wait a minute, this is the San Fernando Valley? As in the archetypal suburb?

Apparently so. This was a Sunday evening nearly an hour after sunset. The weather had cooled down considerably. What better thing to do to wrap up your weekend than to take a leisurely stroll along the Orange Line? "Honey, get the kids ready! We're all going for a walk!" 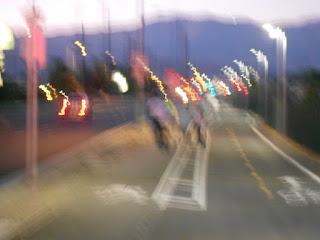 Though darkness grew nigh, the path was well-lit, and unlike its east-west counterpart, it was wide-open, adjacent to a major street, and not the boxed-in cricket jungle atmosphere where lawd-knows who might jump out of the bushes.

A trio of women, each holding water bottles, gossiped in Spanish. Couples, both young and old, walked hand-in-hand. Joggers dashed by, iPod headphones seemingly glowing in the dark.

The Militant unfortunately didn't make a count of all the pedestrians on the Orange Line path for those four miles, but he can clearly remember a dozen or so bikes, including his own. But there were perhaps over 60 people who were walking on this fine Summer evening. 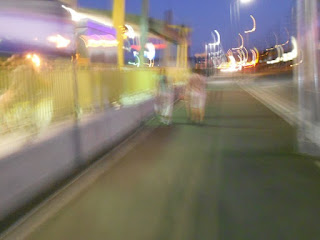 The pedestrian path looked wonderfully safe, although The Militant passed by a police car finishing up its business and heading out, with a young woman walking away, holding a water bottle, nearly in tears. Whether she got a jaywalking ticket (she wasn't holding anything that resembled it) or was a victim of a robbery, is unknown.

After The Militant reached the junctioned Canoga Station, he decided to forge on east and ended up pedaling the 18-mile bike path in its entirety to the North Hollywood station. The entire journey took him almost 2 1/2 hours. 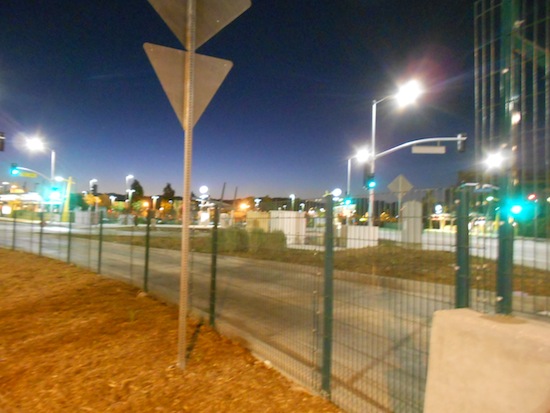 When The Militant started his bike path trek in Chatsworth, he noticed the parallel bike/pedestrian path with their respective icon markings on the pavement. Riding on the O.G. Orange Line path, it was only then did he realize that the same arrangement existed there, too, only not very many people walked that path.

Granted, on a sweltering 105-degree Valley summer day at 130 p.m., you're hardly going to see any pedestrians out on that path, unless they choose to spontaneously combust. But Metro and whoever wants to do any development on Canoga needs to seize upon this newfound pedestrian activity. Maybe a linear farmer's market. Perhaps a designated food truck zone.

Commandeered by Militant Angeleno @ 3:45 AM

Some trees planted along the path would provide shade at points during the day, and would make for a more pleasant walk I bet.