Sittin' In the Lap of Luxury

The Militant gets treated to a special VIP look at Dodger Stadium, luxury suite seats 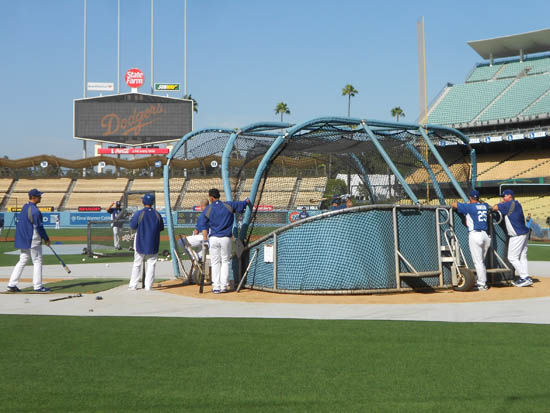 The Militant has been blogging for five years now, and though he writes strictly on a volunteer basis, once in a while, he'll get a well-deserved perk from all the hard militant work he's done for the people of Los Angeles over the years.

Such as the one he got recently from none other than the Los Angeles Dodgers, who offered The Militant and a few other bloggers, as part of their Dodgers Digital Series, a FREE chance to watch Monday night's game vs. the Arizona Diamondbacks from one of them fancy-schmancy luxury suites, and also get an exclusive tour of The Stadium before the game!

The Militant was even offered a free preferred parking pass. Yes, of course, The Militant prefers to either bike or take transit to The Stadium. But once in a while he can spoil himself, can he? Besides, he has not driven his car to a Dodger game in three seasons.

The group converged in the Club Level, which houses not only the luxury suites but the offices of the organization (Note: The Militant will not reveal whether he was masked or unmasked, or even partly-masked during the course of the evening's events. He can only say that special precautions have been taken to protect his identity, and details regarding this subject will not be discussed any further...mmmkay?).

The group met with team historian Mark Langill, who told us some fun Dodger facts, like how the stadium's ban on video cameras was lifted in 1995 all because of pitcher Hideo Nomo (Apparently the Japanese fans who attended his games disregarded the no video camera rule, and the organization just gave up on it because it no longer became feasible to enforce).

The group went through the halls of the club level, which resembled a Dodger museum of sorts, with all sorts of photos, paintings, uniforms, shoes, balls and bats adorning the walls behind individual glass cases. Langill mentioned that there would be a Dodger museum built in the not-too-far-off future.

Then the group descended the escalators in the center of the stands, and entered a special doorway from field level. There the group encountered a corridor filled with Dodger uniforms bearing retired numbers to the right, and to the left, the entrance to the clubhouse.

After ascending a short flight of steps, the group found itself on the field, where we proceeded to watch batting practice from the warning track. We saw the likes of Manager Don Mattingly, superstar Matt Kemp and even new Dodger acquisition Hanley Ramirez. The Militant saw him take his first swings as a Dodger in the batting cage.

Then one of the players approached us...

It was none other than Andre M'fing Ethier! Apparently he's a big foodie and loves reading food blogs. He himself maintained a restaurant blog but stopped because he felt that readers had a hard time separating the Ethier off-the field with the Ethier on-the-field. He did name off his favorite restaurants in Los Angeles (sorry, there were too many to mention), but he did reveal that a) He resides in West Hollywood; b) He never goes south of the 10 or west of the 405 and c) He's only been to the beach once after living in Los Angeles for seven years. He also confessed to dining out since he doesn't cook (and married his wife because she can). DUDE WE HAD A CONVERSATION WITH ANDRE ETHIER!!!! WUUUUUUT?!?!

From the field we went back up to the Club Level and got a peek at the press box. We got to stand eight feet away from a legend.

It was time to start the game, so the group was led to its luxury suite. It had a sweet view of the dugout and the field in general.  The room had video screens, a fridge, some couches, a counter with stools, and for those who wanted to be on the balcony, we sat on Aeron office chairs. Yes, how very un-baseball, since Aeron chairs remind The Militant of sitting in a cubicle. But The Militant would totally love his job if his hypothetical cubicle had a view like that.


Most suites are catered, but unfortunately ours wasn't. D'oh. Guess there had to be a trade-off somewhere. The Militant had to go down to Loge Level for a grilled Dodger Dog!

Speaking of food, if you ever sit in the luxury suites, do not miss the infamous Dessert Cart! It's the stuff of legend, The Militant tells ya! The carrot cake is one of the most popular selections -- Though a slice will set you back $10. Yow!

The Dodgers went on to lose to the Snakes 7-2. Sucks of course (Hanley Ramirez -- The Militant sees you slackin' off!), but it was an EPIC evening otherwise! The Militant would like to thank the Dodgers for inviting him and giving him and 10 other bloggers an unforgettable evening!

And the correct definition of a sellout is someone who profits by compromising their ideals/beliefs. Did the Militant make any money from this? NO (In fact, he spent $30.50 on food). Did the Militant change his mind about the Dodgers? NO. Therefore THE MILITANT IS NOT A SELLOUT.

Any incorrect use of the word "sellout" is merely hater talk.

Dude, I have heard ther is a Dodgers whatsapp channel. I don't know how to complete the whats app download but I would like to participate.