What's New On The Metro 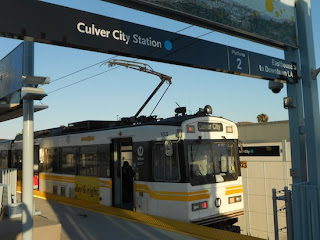 This month, our 87.8-mile Metro Rail system turned 22 years old. Now that it's firmly in its adulthood, The Militant commands you, from now on, whenever you hear a Los Angeles county resident say, "Duh, I didn't know we have a subway, nyuck nyuck," to smack them upside the head.

In addition to boasting six distinct rail lines (one of which just opened this year), there's some new additions already on the system, which you may or may not already know of:

The Late, Late Show: Come this Friday night, as you already heard, all Metro Rail lines: Blue, Red, Green, Purple, Gold and Expo (as well as that bus line in the Valley that wants to be a rail line), will now run until 2 a.m. on Friday and Saturday nights, making it one of only four rail transit systems in the US (NYC, Chicago and Washington DC the other three) to offer service past the midnight hour. We even run later than SF's BART system (Another way you can stick it to your hyphy Bay Area friends). Even the stately London Underground doesn't run that late (though it will have 24-hour service on the first and last days of the 2012 Olympics). So leave your car at home and do more bar-hopping this weekend and every weekend (apparently, it's a pilot program which depends on ridership success, so if you want to see the trains stay running late, ya gotta ride them!). Just hope we don't get to see too much of this on the floors of our trains: 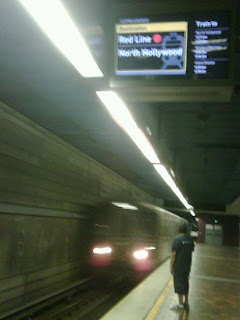 New Train Destination Screens: The 'Train Arriving' notices on the MetroVue video screens in the subway stations, which have been in operation since June of 2008, get a long-overdue update. When an approaching train arrives at each station, instead of the big yellow screen with the subway train icon, you get a yellow and black sign that shows the name of the line, the line color and the terminus station (Union Station, North Hollywood or Wilshire/Western), with a different train icon in the background. At long last the Purple Line gets some recognition.

Although apparently the new screen notices are only activated on the outbound tracks (away from Union Station), and not yet active on the other direction. Looks like some software updates are in the works. 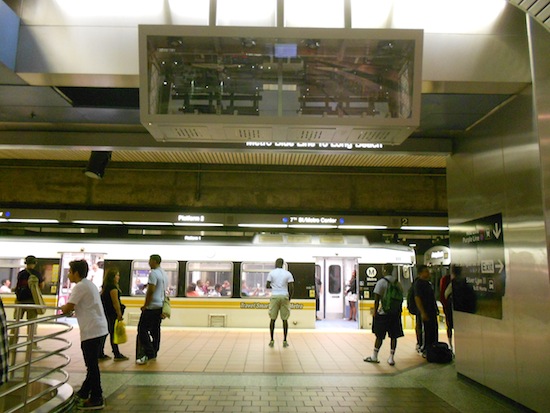 I Screen, You Screen, We All Screen For Transit Information:  And speaking of those MetroVue screens, it looks like at 7th Street/Metro Center, they're installing dual video screens, or adding a 32:9 aspect ratio ratio ultra-widescreen monitor there (to view football games, of course). But it looks more like the former, with one screen presumably showing Red/Purple train arrival times and the other Blue/Expo arrival times. Ultra cool, but is there any reason why they can't have one screen and scroll the arrival info for all four lines that use the station? 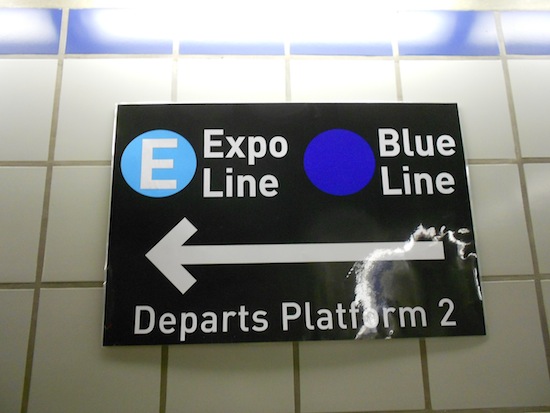 Take The "E" Train:  Speaking of 7th Street/Metro Center, have you noticed these wayfinding signs? Apparently Metro realized that the unspecified color designated to the (M) Expo Line can be too close to blue. No word on whether the "E" will appear uniformly on all station signage, etc., or is just there for wayfinding purposes. You don't suppose people will call it the "E" line (Though the "Easy-E" line might not be too bad...)?

So there you has it. Remember, we're only three years away from the Gold Line to Azusa and four years to the Easy-E line to Santa Monica. And between now and then, we may or may not see cool things like cellular/Wi-Fi coverage in the subway tunnels (so subway riders won't have to rely on the signal anomaly at Wilshire/Vermont).

The Militant will now leave you with a candid pic of transit gadfly John Walsh riding his favorite mode of transport, the Red Line: 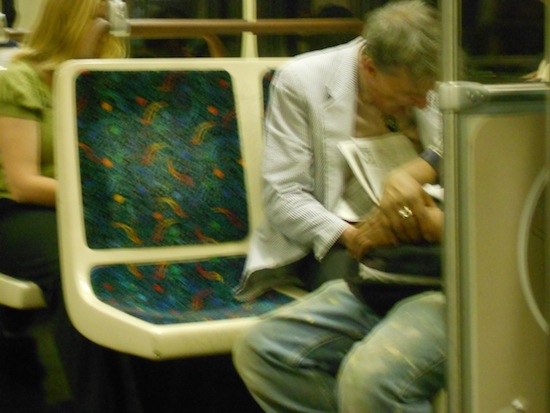 Commandeered by Militant Angeleno @ 4:46 AM

Man, that trash-on-the-floor thing REALLY bothers me. I always try and pick up as much of it as I can reach before I get off at my stop.

Dude, it's not trash in the picture...well, it is but...not anything you'd want to pick up with your hand...