We Like the Fest, The Fest That Goes Bloom 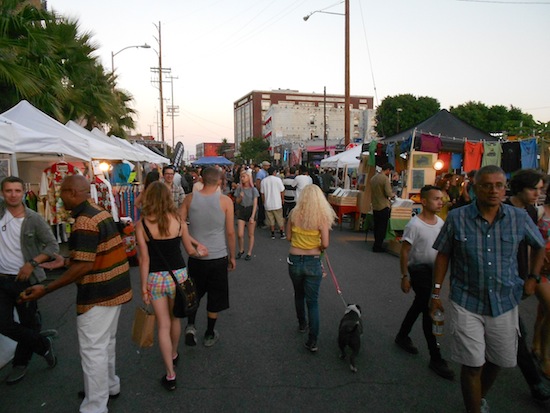 You know that The Militant is all into our great City's outdoor festivals. But one such festival has mysteriously eluded him, until now. It's Bloomfest, the annual Summer celebration of all that is the Arts District, named in honor of the artist, businessman, community activist and neighborhood institution Joel Bloom, who lost his battle with cancer in 2007. The first Bloomfest started later that year. 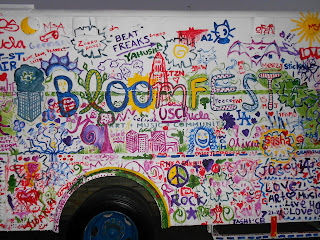 The Militant has been blogging since 2007, but for some reason this event seems to pass him by. Very unfortunate, since his Downtown-based operatives keep talking about it like it's the cat's meow (or the bee's knees), so The Militant had to check it out for himself.

When he found out it was this month, he cleared out his calendar and made it a date. And literally so, as he asked an unspecified fair, sweet Angelena to accompany him.

But she kind of stood him up (not really, but the actual explanation would be too lengthy for this blog, so...let's just go with that scenario). The Militant felt crushed at fist, but then he reminded himself that he is first and foremost a militant, and militants must forge on alone no matter what to survive, and that...he did.

So on Saturday evening at around sundown, he rode his bike to the festival and saw the booth tents looming in the distance beyond Little Tokyo. To his pleasant surprise, there was a free bike valet greeting him on Traction and Alameda. He likes this thing already! 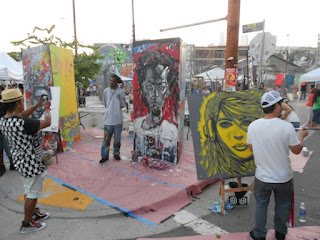 The Arts District is a uniquely funky place, but Bloomfest takes it to 11, so to speak. There were live band stages, live painting, craft and information booths (like for the coming-soon Arts District creative space called The Hub) galore, food trucks of course and most of the area's businesses opened their doors to the throngs of Bloomfesters there that day.

One of the businesses happened to be co-run by one of The Militant's operatives. They had a curious crowd of first-timers at their establishment, and even set up a makeshift bar. "Want me to make you a  drink?" The operative asked, as The Militant was quickly handed a vodka-based cocktail before he could say "Yes." And then another. And then another. 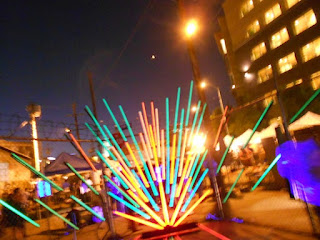 The Militant slowly walked out to explore the rest of Bloomfest. And... it... was... really... interesting.
He even got himself an Angel City beer at their beer garden, and may or may not have sampled some of that Peddler's Creamery bicycle-churned ice cream. No really, he wasn't sure.

He also may or may not have danced silly to the drum-and-bass and dubstep music being played by the DJ by Angel City. Again, he wasn't really sure.

Nor was he sure as he sauntered dizzily through Traction Avenue.

He was struggling to converse coherently with one of the gals at the California High Speed Rail booth. In fact, he was not certain if the conversation even actually pertained to high-speed rail. In hindsight, he can only wonder if she thought, "WTF is up with this guy?!"

The Militant had a sudden craving for fries, preferably of the belgian variety. He didn't want to deal with the Wurstkuche lines, but was chagrined to discover none of the food trucks had any fries available. He had to settle for the kettle corn instead. He doesn't know why that fact is relevant to the story.

There are lots of mysteries, but apparently, The Militant, who headed to another operative's house a few miles away after Bloomfest and crashed on a futon until 2 a.m., then rode back to his compound, seemed to have a great feeling about the night. Maybe it's just the spirit of Joel Bloom showing The Militant a great time.

All The Militant is certain of is, is that he looks forward to next year's Bloomfest!

Commandeered by Militant Angeleno @ 9:32 AM

I guess we may or may not have been in each other's vicinity at bloomfest.

The Phantom took the Metro Gold Line to Bloomfest and noticed that most of the riders were coming from the Pasadena side. Not many from the neighboring areas of East L.A. He was frightened by the pretty people, their vicious small dogs dressed as humans, and fled the scene !