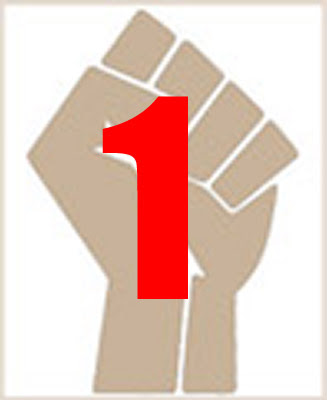 Today marks one year since the Militant Angeleno joined the blogosphere (Hey, that rhymes), where he humbly started out writing, in the first person even, about a bronze statue in Thai Town. A lot has changed in both the Militant and this great City since that fateful day. Now, you would think the Militant would make the usual extremely long post about the road he's traveled, whether on foot, train, bus, car or, of course, bike and whether he may or may not have made an impact on the local blogging scene, and a bunch of mushy congratulatory credits, inside jokes and props to various operatives out there, yadda yadda.

The Militant will do that later. But today he's got a lot on his plate. For one, it's Father's Day, and though the Militant may or may not be a father himself, he may or may not also spend some quality time with his own father, be he biological, adoptive, foster, or step-. And not only that, there's a do-or-die basketball game going on in Downtown Los Angeles this evening.

But here's the good news: Think of it like Chinese New Year. The celebration lasts not one day, but A WHOLE FREAKIN WEEK! Go Lakers, Stay Tuned and STAY MILITANT!
Commandeered by Militant Angeleno @ 2:00 PM

Thanks, Mike! The Militant was rather surprised to find out recently that you only have four years up on him in teh Blogosphere. Big ups to the FranklinAve Crew!

Happy anniversary militant one. I really like what you do here.