A River Ran Through It: In Search Of Arroyo De Los Jardines 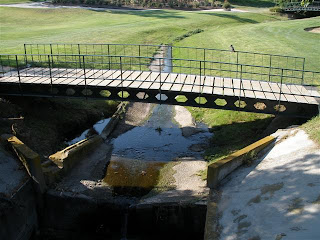 No one can accuse the Militant of not listening to his readers. In an entry last year where the Militant ranted about the proliferation of designated community names in Los Angeles, reader Bert Green pointed out that there was, indeed a "Brook" in Brookside and left a location of the stream which may or may not exist.

This trickled through the Militant's mind over the months so he decided to get on the bike and check the damn thing out. But what was it called?

After retracing the path of the long-lost Sacatela Creek from Los Feliz to Koreatown, he wondered to himself, "How is the Militant ever gonna top that?"

Well, he can't. But he still found the stream nonetheless. 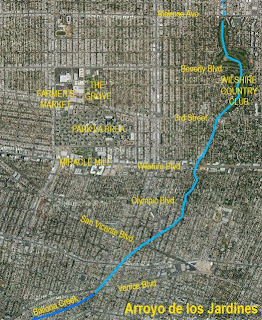 After some Militant research, he discovered the stream was called "Arroyo de los Jardines" (Creek of the Gardens), and the name pretty much holds true today, at least where it's visible.

Unlike, old Sacatela, there are sections of the old arroyo which are not only visible, but carry fresh running water. And we're not talking gutter runoff here.

According to a Los Angeles Times article on the Brookside community, the Arroyo de los Jardines runs from an unspecified location in the Hollywood Hills and ends up in Ballona Creek.

The article also mentioned that the stream is home to "koi, goldfish and crawfish." Hmmm. Many people who settled in the Mid-City area in the mid-20th Century had roots in Louisiana...coincidence?

Militant research to locate the creek's Hollywood Hills source turned up futile and calls made to the creek's publicist were unanswered.

But the creek does daylight itself just south of Melrose Avenue where it runs through the middle of Wilshire Country Club. So yeah, only the privileged few can enjoy this thing (shyyeah, as if they care...). But the average Jose can get an easy glimpse of it at 3rd St. and Hudson Ave. (pictured above, right), where one can see the creek empty into a culvert that runs south-southwest on Hudson (Could the street's name be attributed to a NY transie of yesteryear who named it so because it was a river?). 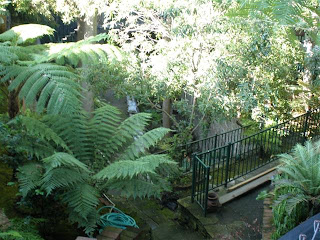 It emerges south of Wilshire in its namesake community, where it again flows for the privileged few, this time in the backyards of some pretty well-to-do mofos. It can be seen over an un-barred masonry fence just west of Longwood Ave. and Olympic Blvd (pictured right). As traffic rushes by on Olympic, one can hear the trickle of Arroyo De Los Jardines, at this point truly living up to its name, nestled in there amidst the abundance of lush greenery found there.

From there, in the neighborhood of Longwood Highlands, the arroyo plays peek-a-boo in seemingly random backyards before disappearing completely. There's no real evidence of the stream save for a few curious-looking channels of greenery running to the southwest, as viewed from an aerial map.

Somewhere near there, beneath Venice Blvd. and Cochran Ave., our little brook friend unceremoniously merges with Ballona Creek, which does not have a source per se, but was originally fed by the various wetlands and swamps (Cienegas in Español) that used to dot the Westside (and the reason why buildings on that part of town are susceptible to liquefaction during earthquakes - remember the little section of the 10 Freeway by The Swamp Blvd that was badly damaged in the 1994 Northridge quake? Of course most transplants don't...).

From there, the Ballona, a.k.a. The Mini-Me to the Los Angeles River's Dr. Evil), as we all know, flows into the great Pacific. No need for the Militant to retrace that, though you're more than welcome to on a bicycle. Just be careful if the fences trap you in.
Commandeered by Militant Angeleno @ 12:46 AM

OMG Militant! This is the EXACT creek I've been trying to find info on! It's so awesome you actually went out and found places to see it. Like you, I've been stumped as the where the creek flows before it goes into the Wilshire Country Club.
I've talked to folks in that area and they said there are little creeks flowing through Hancock Park backyards.
We should totally join forces! Yay!

Another awesome exploratory excursion MA! I've always figured the never-dry water coursing south on Hudson as I bike across it on 4th Street is the old brook, but never had proof until now!

I heard the fountain of youth exists in a Hancock Park backyard.

Seriously though, are you sure it's a real creak in the country club? Maybe it's just recirculated water (via a pump) like in Griffith Park's Barnsdal area.

Having grown up in Hancock Park, my friends and I played/trepassed in the Wilshire CC creek on many occasions. We also went down the storm drain with flashlights to see where the water went. We walked for miles (no exaggeration)to where it flowed into Ballona Creek, but the Wilshire CC stream never resurfaced in Brookside. That water comes from somewhere else. If you don't believe me, crawl into the storm drain at the southeast corner of June and 6th Street. Go north to the Wilshire CC and go south to Ballona. Just where a hat to keep the cobwebs out of your hair.

Anonymous: Thanks for your sharing your exlporation experiences!

We are both correct here. Indeed as a natural creek Arroyo de Los Jardines goes down to Brookside, but due to man-made channelization, which forces the rivers to run in straight lines parallel to streets, the course has been artificially diverted and changed.

Hey, i want to send you a scan of a surveyor map I got a long time ago.
I think one of the green patches might help with the river source.

Another interesting tidbit of info. Ballona Creek is the ancestral Los Angeles river. An earthquake a few hundred years ago uplifted a lot of rock which forced the river to find a new course (the present one). After the L.A. river exited the Glendale Narrows area near Los Feliz it originally hung a right and flowed through the Silver Lake area heading southwest to present day Ballona Creek. It is really obvious if you look at a geologic map of the area, indicated by a light tan "younger alluvium" that can be followed to the Ballona Wetlands. The flow from the river formed the bluffs that Lincoln Blvd. climbs and where the Catholic university (I think it's Mt. St Mary's) is located.

Hi Militant,
I know I'm pretty late to this, but in this interview
https://www.chevaliersbooks.com/jane-gilman
there's an offhand remark by Tom LaBonge that the creek starts at Bronson Caves. Don't know where he got that information but at least it's something.