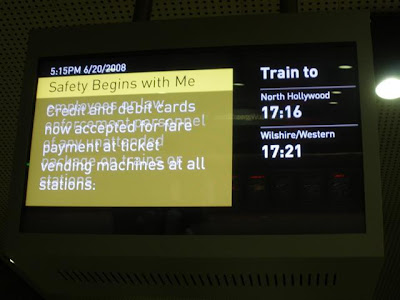 The Militant had some unspecified business to do Downtown, and armed with his trusty TAP card, he hopped on the (M) Red Line en route to his compound this evening.

When lo and behold, he saw it. He finally saw it.

The long-awaited arrival displays on the recently-installed TransitVue LCD video screens now display the arrival times of subway trains on the Red and Purple lines (pictured above). Yesssss!

The empty "Train to" column has now been filled in with the expected times the next trains to the respective destinations will arrive.

Although, as you can see, it's displayed in Militant Military time. Which is fine for this camo-adorned urban assault soldier, but not so convenient for the gas price-oppressed Civilian Angelenos on the platforms (Say what? Next train coming in 16 minutes 45 seconds?).

No make matters worse, the actual time/date display on the upper left-hand corner of the TransitVue screen shows the usual 12-hour civilian time. Very inconsistent! The Militant thinks, or at least hopes, the folks at Metro will change a few settings there.

And to be even more nitpicky about this, the Militant took another picture of the display, this time on the platform level, just prior to boarding the North Hollywood-bound Red Line train. As you can see, the time is off by 10 minutes from the mezzanine-level photo at the top of this post: 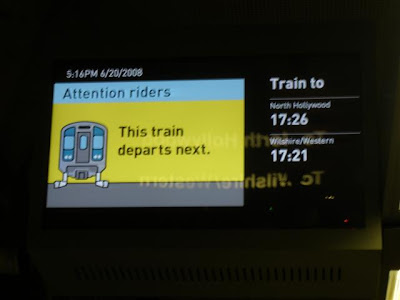 (And by the way, way to go with the cutesy cartoonish subway train icon. Does it have a name? Look out, Thomas!).

The Militant, being of the curious sort, wanted to see if this display was an accurate reflection of the train movements. So he disembarked at an unspecified Red Line station, and, taking advantage of a not-in-service escalator, got this vantage point of an arriving train: 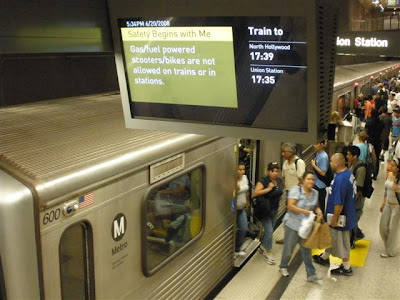 Hmmmm. As you can or cannot see (click on picture to enlarge if the latter's the case), the time was 5:34 p.m. but the Union Station-bound train's arrival is listed as 17:35 (5:35 p.m. for you civilians). Which means they only use the predetermined timetable, and late/early/delayed trains are not reflected in the display!

What's also not cool is that there's no flashing "Train Arriving" notice anywhere (the Green Line and even the light rail wannabe Orange Line, both still bearing the archaic "silent radio" LED displays, though, do announce arriving vehicles, go figure...). When the displayed time passes, that particular display simply updates to the next train.

So as you can see, it's not really a user-friendly system. Military time aside, even if the 12-hour clock time was displayed, you still have to refer to the time/date on the upper left, or your own watch/cellphone/iPod. Why not "5 minutes" or "20 minutes" on the display? Talk about lazy!

The Militant has mixed feelings. He is obviously disappointed at a long-awaited transit amenity appearing so flawed, yet he thinks despite the flaws, it'll save him the Indiana Jones-like rush down to the train to beat the closing door (which may or may not have actually happened...more than once). To sum it up...and here comes the pun people...

I can't express how excited I am about this. This feature was so useful when I rode the trains in NYC, and I can't wait until it's fully up and running here at home!

Very cool, but the fact that it doesn't show actual arrival times is still embarrassing. BARTs been doing this stuff since the 70s.

As you also noted, even more useful than arrival times is just a loud voice saying "Hey, this train is the Wilshire Train, don't get on it if you want to go to North Hollywood, dummy!"

A minute countdown (Train to North Hollywood arrives in 5 minutes) would be more useful, I think.

Voice announcements would also be needed for the visually-impaired.

I just noticed this too yesterday. I take the Red and Gold lines to work in Pasadena every day and saw the updated screens on my commute home! I knew either you, or Metro Rider or Streetsblog would cover it!