'Brand' New: The Militant Takes On The Americana 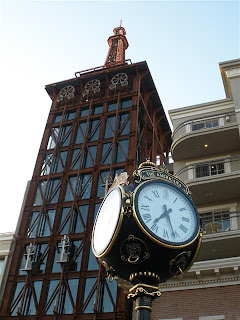 The Militant's curiosity can't stands no more, he just had to get on the bike on Monday afternoon to check out the brand spankin' new The Americana at Brand in Glendale, a.k.a. Carusoville II.

First off, the Militant rode the 11-mile round trip trek and decided to count every riding cyclist he saw. When he got back to the vicinity of his compound, his tally was 25 bicyclists -- averaging about 2.27 bicyclists per mile. The Militant plans to do this for every solo bike trip he takes to demonstrate how many more people are biking these days.

As the Militant passed the blinking pedestrian crosswalks and car dealerships on Brand Blvd, there it was, developer Rick J. Caruso's $400-million Grove twin, and the mofo's even got a street named after him.

First off, the Militant was eager to find bike parking. He heard about some law that developers are required to put x-amount of bike parking in their new projects -- but that's only a City of Los Angeles requirement. We're in Glendale (a.k.a The Jewel City, a.k.a Big Armenia) now. Though where is the bike parking at the Grove? Oh yeah, it's in Farmer's Market.

Having found no easily visible bike parking, as he ventured towards the west end of the property, he found two bikes chained to the railing. Grrrrreat. So the Militant had no choice but to follow suit. 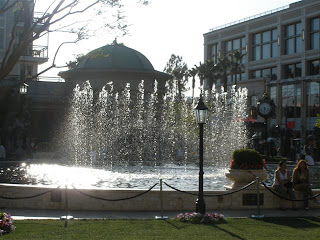 The Militant took a walk amidst the dancing waters pools (pictured left), which apparently does "water shows set to music" every half-hour. At one point, the water jets did a number to Barry White's "You're The First, The Last, My Everything" in true orgasmic fashion, the Militant kids you not.

Yes, the water pool, the grassy "park" and the Pacific Theatres multiplex had the Militant wondering where was The Apple Store, but of course it was across the street, at the venerable Glendale Galleria.

The Galleria folks probably initially thought their newer, flashier, outdoor neighbor would cut into their bees-knees, but the throngs of people traversing the Central Ave. crosswalk demonstrated otherwise. If anything, it probably even helped business, and in fact, on this day, the Militant found absolutely nothing of use to purchase at Carusoville II and instead bought something at the Galleria. Because he's old school like that.

The one cool thing about the Americana was the little (battery-powered) electric trolley (technically, though it's still on rails, it's not a trolley, since a "trolley" refers to the mechanism that picks up power from an overhead line, of which there is none here). Funny, as it rides on the west side of Brand Blvd -- the same thoroughfare which carried the Pacific Electric Red Cars. Incidentally these trams are too of a reddish color.

The one-way ride lasts about eight minutes, and you can get your own ride here:

In all, the Militant wasn't that wowed with The Americana. It looked a lot bigger on TV when the local news stations covered its opening. In short, the Militant came to the following conclusions:

The Americana At Brand is teh r0x0r cuz...

- If you live too far from the Grove, it's a reasonable substitute.

- The dancing-waters pool is now the largest body of water in the Glendale area.

- If you're the kind of guy who's into looking at hot MILFs, then this is definitely the place to be.

- The "trolley" is slightly less Disneylandish.

- The mixed-use nature of the place is an interesting touch to Glendale.

- Between it, the nearby Galleria and the nearby Exchange, the city of Glendale can claim to have pretty much every chain store in existence.

The Americana At Brand is teh sux0r cuz...

- It's a total faux public space.

- Aside from possibly the movie theatres, and the initial novelty of it all, there's no real reason to go there.

- It's got a Pinkberry and not a Red Mango.

- The lack of retail frontage on Central Ave. makes it into a dead zone.

- There's no Farmer's Market next door.

- It's got a Caruso Avenue.

- Between it, the nearby Galleria and the nearby Exchange, the city of Glendale can claim to have pretty much every chain store in existence. 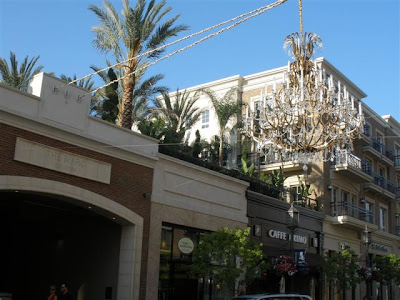 Wassup with the chandelier? 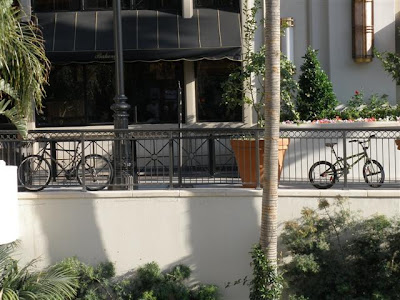 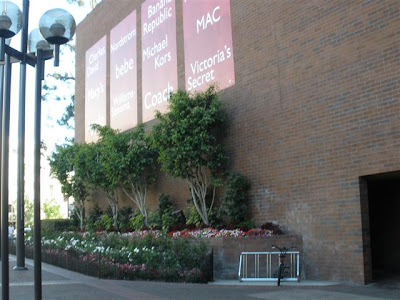 Meanwhile, across the street, at least the Galleria knows what bike parking is (even though it's a wheelbender).
Commandeered by Militant Angeleno @ 1:44 AM

Yo Militant, thanks for this post. I'd been wanting to go check it out but hadn't been able to. I thank you for saving me the need to go there myself. Aside from the trolley, I'd probably not find anything of interest. The bike parking issue sucks but then again we are always reminded that this is "car culture" town.

The lack of bike parking within the development sucks, but there is new city-installed sidewalk bike parking on Brand just north of the Americana in front of In N Out, as well as on both sides of the street along Brand throughout downtown Glendale. All of those racks are new and have been installed in the last few months.

...the Militant found absolutely nothing of use to purchase at Carusoville II...

That also sounds like every trip to the Grove I've ever taken.

rogedog: The actual "Car Culture Town" per se has a requirement to accommodate the equivalent of 2% of the amount of car parking to bicycle parking spaces. Glendale does not have this in their building code.

But thank you Scott for the sidewalk bike parking tip.

And as for delicious' comment, the Militant will disclose that he bought his iPod at The Grove's Apple Store...back in '04. But yeah, that's pretty much it.

The cyclist count you conducted motivated me to do the same thing on the ride home from work last night (June 3). I was surprised and pleased to have my previous record of 14 bicyclists (tallied way back in January) eclipsed by the 23 -- count 'em: Twenty Three! -- I encountered between Westchester and Silver Lake in the 75 minutes I was on the road.

Something's happening out there my militant friend!

I went there on opening night with the girlfriend to see about all the hoopla. Live close enough so we biked there knowing full well that parking would be a mess. We also used those rails to lock up the bikes. Pretty sad.

I left a comment on their website telling them they needed bike racks/storage to go along with their 5 star concierge service.

Elaine: You may or may not be correct. But then who in their right mind would ever go to Calafreakingbasas?!?!

If you're the kind of guy who's into looking at hot MILFs, then this is definitely the place to be.

That was a big LOL.

Anonymous: Maybe that blog should be called "MILFant Angeleno"