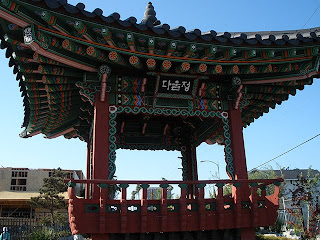 Standing on a triangular property at the northeast intersection of Normandie Ave and Olympic Blvd in Koreatown stands a curious structure (despite the Militant's usual attempt-at-a-pun title, it's technically not a pagoda, since it's not a multi-tiered structure) that paradoxically looks out of place with its western urban environs (especially the neighboring day-glo LAUSD-moderne Mariposa-Nabi Primary School), yet is totally at home with the cultural identity of the neighborhood.

The Militant has passed this property by car countless times and has seen it in various stages of construction, yet never had the opportunity to visit it up close until he made a Militant bike mission to it recently.

The property is the Korean Pavilion Garden, dedicated in 2003 to commemorate the centennial of Korean immigration to the United States. The structure, which is referred to as a pavilion, is an exact replica of the Aeryunjeong Pavilion on the grounds of Seoul's Changdeok Royal Palace and was designed.

According to the descriptive marker on the property, the pavilion celebrates Korean American heritage but also symbolizes harmony with the other cultures that represent Los Angeles. On the south side of the garden are twin pillars of light which symbolizes the Korean community's partnership with the other cultures of the region. Hmm, wonder if the new owners of Little Tokyo Shopping Center across town embrace that same message...

The garden, sponsored by individuals and businesses in the local Korean community, whose names are all graciously immortalized in marble, is protected by an iron fence, built low enough not to detract from the aesthetics of the public space. The fence is also open during business hours for people to walk through and visit.

Just another example of the overlooked gems of this town that one tends to miss while encapsulated in an automobile.
Commandeered by Militant Angeleno @ 12:28 AM