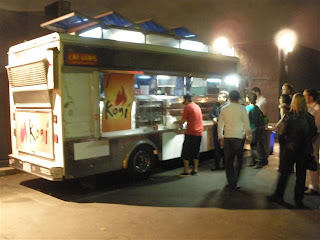 Much has been said about the Los Angeles mobile food sensation known as Kogi. So much, that the Militant need not repeat what's already been said (or even re-tweet what's been on Twitter). But one thing he needs to say is that he's a Kogi late bloomer, and didn't get the opportunity to try one of them Korean-style tacos until Thursday night.

After relishing in the post-NBA Finals Game 1 Lakers victory (Whatup, all you Laker fans! Caaannn yoooouuu digg itt?!?), the Militant decided to take a bike ride for an unspecified distance and celebrate by partaking in all that is Kogi tacos. After all, aren't tacos synonymous with wide-margin Laker wins? It was a night of Kobe and Kogi, in other words.

He learned via Twitter that one of the trucks, "Roja" would be parked at Silver_Lake(r)'s 4100 Bar on Sunset. Fearing an onslaught of hipsters (especially anticipating a long line of 'em while waiting for his tacos) the Militant brought some protective gear. 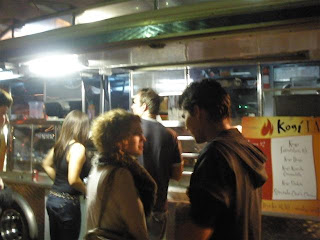 When he got there, he discovered he needen't need the gear, as the line was only about five deep, and it was just a bunch of different kinds of folks more or less in the Militant's age bracket. Phew on both counts!

Fearing his identity might be revealed, the Militant left the scene and headed back to his compound to consume his provisions.

The tacos were mighty tiny! But smelled amazing. It was like a whole new world. Yes, the Militant has had Korean food before, but not packaged like this. He took a good whiff of the tacos and the quesadilla before chowing down.

The Militant really wanted to see if Kogi is worth the hype. The Miltant can confirm that, yes it is (especially since he only had to wait all but 5 minutes from getting in line to getting his order, though the line grew to 18 deep by the time he left). 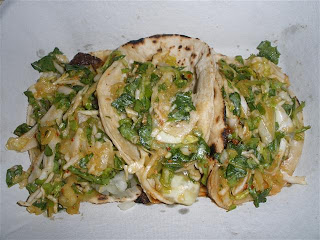 One little complaint; Kogi seems to pride itself in its Korean BBQ meats. After all, the name is a variant of "bulgogi." But the little tacos (pictured, right) are so covered in cilantro, onion, cabbage and spices that you hardly can taste the BBQ. Well you can, but the spicy pork and short rib tacos kinda tasted indistinguishable. They were still good though!

Same with the quesadilla. The cheese seemed too overpowered by the kimchi. Which is not to say that a kimchi quesadilla doesn't work, maybe they just need more cheese in there! Again, not bad stuff at all! Just nitpickin' here! The kimchi sauce and sesame seed on the outside is a nice touch though. 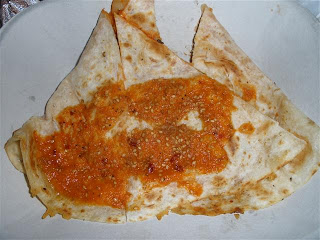 Despite that, the roving Korean taco truck has officially gained a new fan in the Militant. But mostly because of what it stands for. This is true fusion cuisine, and best of all you don't have to sit down in a hyper-pretentious upscale eatery to try it. It's street food, after all! Also, while it's great that Los Angeles can take pride in its In-N-Outs and french dip sandwiches, the Kogi experience is something truly, uniquely Angeleno. Surely the concept has already been imitated, and it's only a matter of time before you can find Korean tacos out in Queens (of course, they won't be as good), it's great to know that the concept originated right here, and that we're pioneers in this high-tech, mobile, multicultural fusion cuisine revolution.

It can't get any more real Los Angeles than that. Savor it, Angelenos.

Early on in the Kogi craze, their truck graced Silver Lake at the nonhipster interval more commonly known as dinnertime. Those nights are long gone, probably never to return, and neither am I since Thursdays at 11 p.m. pretty much the last thing on my mind is food -- even if it's the good stuff they bring.

If you haven't yet been, you should think about a visit to El Parian (south side of Pico a block east of Union). Their birria de chivo (stewed goat) tacos are awesome and their carne asada is some of the best I've ever had -- and they're big! Two's plenty for me.

I finally tried Kogi this week for the first time - I had three tacos, and I couldn't tell them apart either.

But they were good regardless.

Kogi must go down! Those faux evil dopplegangers of the one true taco truck taco. Shame on you militant for being bought off by Kogi's tasty Sriracha-laden rip-off! Are you a TRUE LA native? I doubt it.