The Militant Gets His Lummis On: Lummis Day 2009 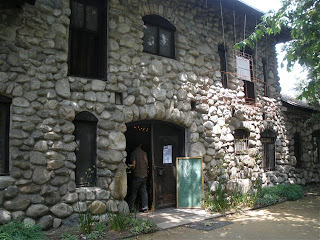 The Militant first heard of this "Lummis Day" event a couple years ago, and kept missing it each year due to his various militant and extramilitant activities. However, he made it a point to go this year, taking the Gold Line on Sunday to the Southwest Museum station.

For those of you who may or may not know your Los Angeles history, the day was named in honor of Charles Fletcher Lummis, a late-19th century renaissance man of sorts, who was famous for not one, but many things: the first Los Angeles Times city editor, Los Angeles city librarian, writer, photographer, connoisseur of everything Southwest, the list goes on. No, he was no native, but he did something truly hardcore -- he walked the 3,507 miles from Cincinnatti, OH to Los Angeles, and wrote about it in weekly dispatches to the Times and other newspapers around the country. Guess you can say he was the first blogger! 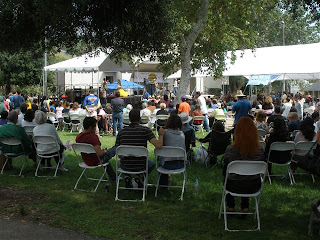 The Militant will be honest: He was a little let down by how the festival came to be compared to his expectations. He thought locals would do total Lummis cosplay in 1890s garb, while schoolchildren would read some of his poems.

Instead it was a neighborhood festival, celebrating all things Northeast Los Angeles. He did dig the total local vibe - local food, local bands, local artists. The festival was spread out among three locations: Sycamore Grove Park on Figueroa Street, the normally-closed Southwest Museum's Casa de Adobe, adjacent to the Gold Line station and of course, Lummis' famed residence, El Alisal, (a.k.a. Lummis Home, pictured above). This was the Militant's first opportunity to check out Lummis' humble abode, which he built with his own hands. The home is now a museum to Lummis-bilia, as well as the home of the Historical Society of Southern California.

A half-mile walk to the north was the main festival site, Sycamore Park, which featured three stages of entertainment, which included artists like Carlos Guitarlos, Wil-Dog Abers from Ozomatli and 2/3rds of Culture Clash. There was some great chow to be had, from Korean BBQ, tacos (but not Korean BBQ tacos), shaved ice and baked goods.

Across the street, the Militant climbed up a stairway which lead to a parallel sidwalk path elevated above the regular sidewalk on the west side of Figueroa (pictured lower right)! Others walked along this path, from couple to parents with their kids. It was a nice, only-in-NELA experience, though that path is long overdue for a re-paving. 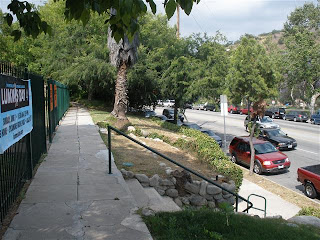 The Militant walked past houses and apartments, but was eventually led to the festival's third venue, the Casa de Adobe, which was transformed into a makeshift gallery for the day featuring work from local artists. The Militant stopped to say "hi" to an unspecified artist operative there.

The Militant unfortunately had to leave early due to some militant commitments on his militant calendar, but did stay long enough to chat with some locals in the community to learn more about the NELA vibe.

This year was the fourth iteration of the festival, so make it a point to check it out in 2010. The Militant May or May Not Be There!
Commandeered by Militant Angeleno @ 11:21 PM

obviously the militant did not bother to visit the oldest museum in los angeles which was just above the festivities...and no the casa de adobe is not the museum itself, there is much more.