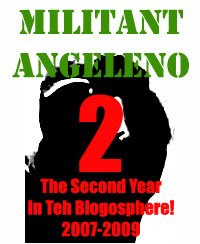 For what was once a virtual land ravaged by historically and culturally-disadvantaged hipsters chopping away on Mac Books, claiming whatever they wanted to be "The Eastside," the landscape has changed, with some local standard-bearer blogs featuring more historically- and culturally- relevant posts than before, and even some of the formerly voiceless finally becoming empowered.

The Militant's job isn't done, of course, as evidenced by the behavior of some punks in the Downtown area on Sunday night. The Militant still forges on, even through what may or may not be career, time, health or unspecified issues. The Militant knows full well that his lack of prolificity withing the past year has become an issue, both public and personal, but the Militant still lurks amongst the multitudes in the City to bring you what you might not find anywhere else!

The Militant would like to thank each and every one of you for your time, your comments, including the Militant Angeleno's blog in your RSS feeds, your Facebook friend adds and Twitter follows! Much is truly appreciated from the very Angeleno heart and soul of this Militant! If he could bump fists with each and every one of you, he could (but of course, doing such a thing might give away his identity, so unfortunately it ain't gonna happen)!

The Militant has some surprises up his sleeve, so hang on, Angelenos and...STAY MILITANT!!
Commandeered by Militant Angeleno @ 10:37 PM

Congratulations Militant. I'm a newbie to your post, but am loving it so far. Keep it up holmes.