The Streets Are Not That Alive With The Sound Of Music: Make Music Pasadena Festival 2009 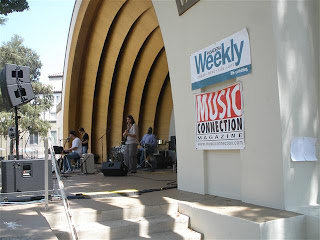 The Militant headed over on Sunday to the exotic land known as Pasadena as the city hosted an event called "Make Music Pasadena," a one-day music festival that made its debut last year (which the Militant regrettably missed). The festival is the local component of an event called Fete de la Musique, which started in Paris, France in 1982 on the day of the Summer solstice. The event is now held in over 300 cities worldwide.

The whole premise of Fete de la Musique is to celebrate and encourage music in a daylong event, with organized stage performance venues and impromptu sidewalk performances, all of which for free. Sounds pretty militant to this Militant's ears! So yours truly brought along Militant Operative Stingray, an operative who knows a thing or two about music, to help guide him.

After they disembarked from their Gold Line train, they walked up just yards from the station to Pasadena's Levitt Pavilion to check out a performance by Chase Allen in the Hollywood Bowl-esque bandshell. Fete or no Fete, the bandshell hosts regular performances during the summer. So far, so good, but something seemed to be missing here - some sort of, oh...je ne sais quoi.

We then headed over to the next venue, the Pasadena Central Library, a few blocks away on Walnut Street, to catch some more performances. Unfortunately, the library remained like a library normally behaved: very quiet. In fact, there was no stage nor sound equipment anywhere to be seen!

They did see some action down Garfield, which, after reaching it, turned out to be the Pasadena Chalk Festival, a totally separate event, which had a music stage of its own, but was not an integrated part of Make Music Pasadena.

Another MMP venue was found at One Colorado a few blocks to the west, tucked away in a courtyard adjacent to the movie theatres, with the dark downtempo vibe of Eliza Rickman performing. 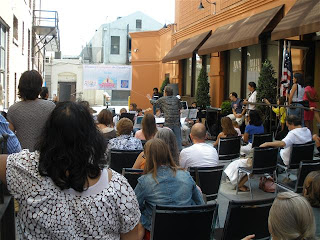 Around the corner, we stumbled upon a MMP sign on the sidewalk and to our right was an alleyway decently crowded with folks. Another venue! This time it was the Lycee International Los Angeles elementary school band (pictured left), with little tykes playing the jazz standard "Fever," some of which sounded pretty advanced for their age! Not only that, but the alleyway, part of the Alliance Francaise center, captured more of the Fete de la Musique spirit the Militant was looking for. 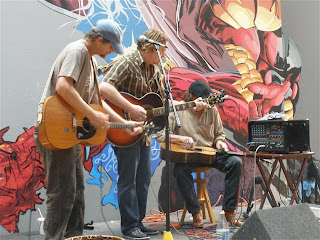 Hunting around for the next venue, we found the Armory Center For The Arts, with the sounds from the Levitt Pavilion echoing in the distance. The art center hosted an indoor venue, where the Militant caught the bluegrass trio The Black Sheep (not to be confused with these guys, lol) do their thing in front of a graffiti-inspired mural (pictured right).

After finding the next venue. the Cote d'Azur spa, almost by accident (it was mis-labeled on the map to be next door to the Armory Center), where yet another parallel event was found, this time Pasadena's LiveH20 festival, which wasn't mentioned in the MMP literature but this seemed to be the venue. Needless to say, there was no music playing here, just some woman making some new-agey chants, though a few people holding guitars were found.

We did not stay long.

A couple venues, such as Old Town's Twin Palms, Redwhite+bluezz and POP Champagne and Dessert bar, did not have any performances during the Militant's and the operative's visit, so those had to be skipped. The last venue before we hopped back on the Gold Line was Mercantile Alley, next to the Coffee Bean & Tea Leaf, where singer/pianist Theresa Flaminio was performing, out in the sun, next to a parking structure (pictured left). Guess this went more in line with the Fete spirit, which was the great thing about it, but there was something odd about the location nonetheless, with passers-by constantly walking in between the performer and the latte-sipping audience.

So Make Music Pasadena seemed to be, despite its wonderful intentions, somewhat of a dud, though after a little Militant research, it sounded like the economy was more to blame,
along with the day being Father's Day, as well as the adjacent Chalk Festival down the street (which, admittedly, seemed to have more energy to it). Still, for an event whose energy traditionally relied on the grassrootsiness of spontaneous human participation rather than organized performance venues, the Militant saw very little of it.

The Militant and the operative did spot one or two street performers, but they were probably going to be there, MMP or no MMP. And from the sound of one trumpeter situated across the street from the One Colorado entrance, listening to him struggle painfully getting a sound out of his horn didn't sound very festive at all.

Militant Operative Stingray was keenly intent on attending MMP this year to do some research on a little project he would like to pursue, which may or may not entail organizing his own Fete de la Musique event in an unspecified part of Southern California. From what he's divulged to the Militant, it sounds like he's got a plan, and the Militant wishes him the best of luck. Showing initiative - now that's music to the Militant's ears.
Commandeered by Militant Angeleno @ 3:08 AM

Thanks for your coverage - you hit up so many spots. I felt like I was there. Exotic land of Pasadena - LOL!