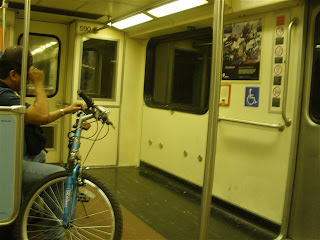 After much talk last year about expanding bicycle capacity on Metro Rail trains, the Militant noticed while riding the (M) Red Line late last night that at least one of the cars had another set of seats removed, assumingly to create more space for bicycles in the subway, right? Well maybe they should be a little more obvious with it, as not every cyclist is using the space as intended (pictured right). EPIC FAIL!

Maybe they just assume they need more standing space, which isn't all that bad since more standee space is a mark of a heavily-used rapid transit system, as anyone who's ridden NYC's subway knows.

Of course, it would help if they put a sticker with a bike icon in that space, y'know, just to let cyclists know that the space is dedicated for them. Otherwise, it's just a waste of underutilized space.

Not even a zamboni would use the space! 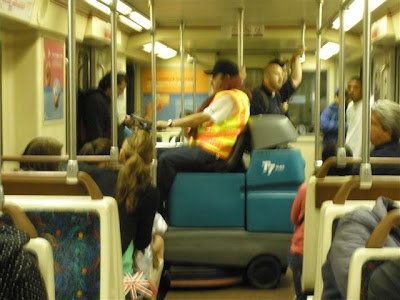 (Yes, the Militant knows it's really a floor polishing machine, but let's face it, a zamboni is much more funnier...)
Commandeered by Militant Angeleno @ 12:25 PM

Ya know, I started noticing that Metro wasn't advertising the new standing space as for bikes even though there are wheel chair signs. I have to say, I see about 20 times the number of bikes as wheelchairs on Metro trains, so it would be nice if they made clear that this space is for all riders with wheels (of course, wheelchairs get priority).