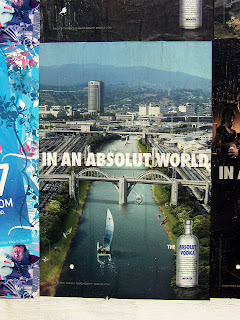 The Militant can be rather verbose, but at times the Militant lifestyle can be downright tiring, so this Militant is going to keep it (relatively) brief today.

Pasted ad bills are a common urban sight, hawking everything from events to cable TV shows to movies to CDs, posted in multiples as if its repetitive motif as an artistic statement transcends its original intention as a visual advertisement, ever temporary, until they are pasted over by another ad. But this particular one in the hood caught this Militant's eye. This one (pictured left) for Sweden's Absolut Vodka depicts an "Absolut World" where the urbane concrete flood control ditch known as the Los Angeles River is a lush urban greenbelt, filled with enough pristine-quality agua to support boats and other recreational watercraft. It's almost as if this ad agency consulted the Los Angeles River Master Plan instead of one of those hegemonic Madison Avenue ad executives. Who knew an alcohol ad could be something Friends of the Los Angeles River could love? 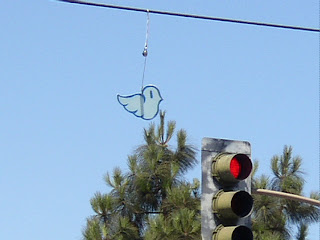 Continuing his theme of "Neat things I saw around the neighborhood as an excuse to make today's blog entry" the Militant presents one of the newest "Berd" installations by the enigmatic Angeleno street artist named Browne, located in the general area of the Militant's compound, at Vermont and Melrose avenues (pictured right). From a different vantage point, the Militant saw the plywood-rope-and-padlock wonder of the Berd juxtaposed against a background of clear blue summer sky, the tip of a Vermont Avenue Canary Island pine tree and the majestic uncloaked ridgelines of both the Verdugo and the San Gabriel mountains looming boldly in the distance.You just had to see it to believe it. To quote the great Angeleno songsmith Randy Newman, "Looks like another perfect day..."
Commandeered by Militant Angeleno @ 1:12 AM

I had to do research on transportation for my job and one of the things they hope to one day have are water taxis on the LA River.

How awesome is that? Water taxis?

From a different vantage point, the Militant saw the plywood-rope-and-padlock wonder of the Berd juxtaposed against a background of clear blue summer sky, initial necklace chile , initial necklace germany the tip of a Vermont Avenue Canary Island pine tree and the majestic uncloaked ridgelines of both the Verdugo and the San Gabriel mountains looming boldly in the distance.You just had to see it to believe it.