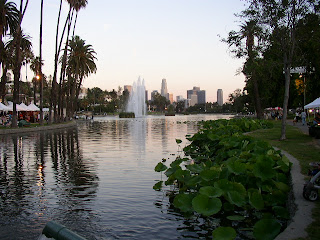 Friday night marked the start of the 30th Lotus Festival (not the "30th annual" - it actually started 35 years ago but due to budget cuts there were no Lotus Festivals in 1978-79 and 1986-1988), with a first-time-ever twilight jazz concert to get things warmed up. Only a few merchandise booths were open, and the food court and "Flower Island" booths lay dormant. The concert featured three jazz acts - none of which had any connection to Asian/Pacific Islander culture, but hey, there ain't nothin' wrong with jazz. The Militant arrived in time to catch the Cross Hart Jazz Experience lay down the gamut from bebop to jazz-funk, and even spotted an old friend from way back among one of the bandmembers. Right after the concert was a brief fireworks display which made Echo Park literally live up to its name (wisely, they're saving the big show for Saturday night).
The unfortunate thing was, as shown in the photo above, the dearth of the festival's namesake. What is normally known as the largest lotus bed outside of Asia didn't have much to show for it this year, with a meager row of lotuses lining the western shore. Damn you, global warming! (Actually, lotus flowers normally thrive in warmer climates). But Saturday is where the fun really begins, with musical and dance performances, dragon boat races, wok popcorn and neighborhood gentro-hipsters whining why none of the vendors in the food court serve vegan food (Tsk, tsk, y'all don't get it...) 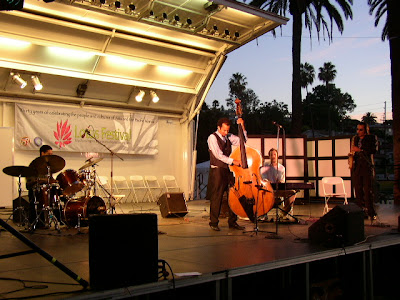 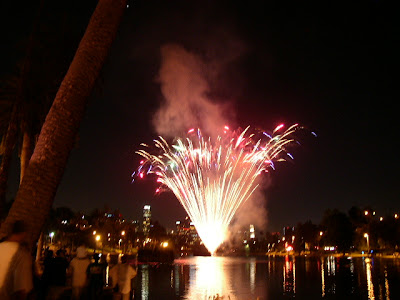 One of China's greatest contributions to the world lights up the lake
and echoes throughout the park. 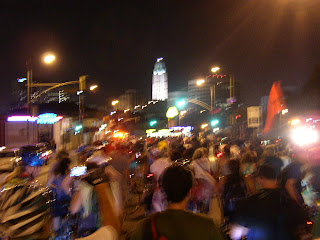 After the last firework popped and after his chat with his jazz musician friend from way back, this Militant hopped on his bike and headed due west on Sunset, when he passed another bicyclist on the opposite side of the street who shouted, "Midnight Ridazz!" and the Militant replying, "Where?" and hearing the answer, "Down the street, Sunset and Echo Park!" So the Militant made a u-turn and ended up in the parking lot of one of the last five Pioneer Chicken stands in the world where a gradually-growing mass of handlebars, wheels, spokes and frames convened under the golden glow of sodium lights. This soon became my first full-fledged Midnight Ridazz ride (fatigue after a Critical Mass ride in late April caused the Militant to bow out of the MR ride before it began). This Friday the 13th ride started with an LAPD SUV apparently looking to spoil the fun of over 500 ridazz, but luckily on this night, the cops were there to guarantee our safety by blocking off intersections and reminding us not to ride on the streets British-style. The under-20-mile ride, in perhaps the greatest of night weather conditions, snaked from Echo Park to Historic Filipinotown to MacArthur Park to Koreatown to Pico-Union to the Byzantine-Latino Quarter to West Adams to Downtown to Chinatown to the Arts District to Boyle Heights (in The Real Eastside), through the industrial district back to Downtown and Echo Park. In many ways it was a nocturnal version of the Acura L.A. Bike Tour, (right down to approaching Downtown on the 6th Street Viaduct) which the Militant rode back in March after a seven-year hiatus.

The Militant observed that the overwhelming majority of the ridazz were of the white velohipster crowd, yet there were a good number of Asians and Latinos in the pack. But out of the sesqui-mil tally there were only three ridazz of black descent. What exactly is keepin' more of the brothaz and sistaz from bein' ridazz?

Ultimately the sheer quantity of ridazz became a human invincibility shield, allowing people to be out in the open in neighborhoods and areas most of them wouldn't dare caught being in otherwise. Residents curiously peeked outside windows and stood on balconies and fire escapes to see the crowd, ultimately cheering them on. Riding around MacArthur Park or through the dank alleys of the industrial district on the east bank of the Los Angeles River was suddenly no big deal (though the foul smell of the Vernon meat packing plants that wafted up the river was perhaps the low point here), these ridazz have taken them over.

Today, Bastille Day, marks the 17th anniversary of the opening of the Metro Blue Line, the first of what are now five lines in Los Angeles' Metro Rail system. The Militant still clearly remembers that hot summer Saturday in 1990 when the shiny Japanese-built light rail train emerged from the Flower Street tunnel amidst a blue-colored fog and blue confetti, and arrived at Pico Station, which, for the first seven months of operation, was the northern terminus of the Blue Line. A dedication ceremony took place on the Pico Station platform, where VIPs sat (including Mayor Tom Bradley sitting not far from the then-brown-haired future Mayor Jim Hahn). Bleachers were erected across Flower Street, where members of the public waved blue pom-poms handed out to them, soon getting in a long line to ride this new-fangled contraption to Anaheim Street in Long Beach (the southern loop stations did not open until September '90). Today, the Blue Line, now with repainted trains, all devoid of the color blue, is an emo teen, shuttling from north to south and back, from the lows of the subway tunnel to the highs of the bridge over the 710 freeway, carrying 70,000 passengers a day. 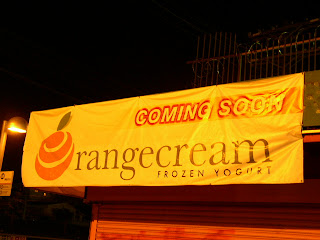 It looks like Echo Park isn't immune from the Fro-Yo Cold War as this banner was seen at the corner of Alvarado St. and Sunset Blvd. Minus one point for using the name of a color; plus one point for not using any alteration of the word "berry."

Commandeered by Militant Angeleno @ 2:09 AM

Bugger, I missed the ride! I was in the Silverlake/Echo Park neighbourhood, cycling up from downtown not long before that. I could have come along. Instead I found myself sitting with a tasty passion fruit and vanilla gelato at Pazzo Gelato, (demonstrating how my folding bike works to interested patron). Oh well....