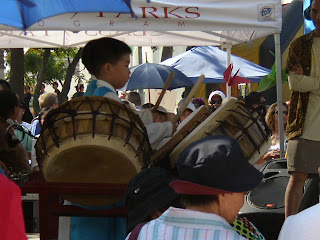 So the Militant got some Lotus Fest action for the third and final day on Sunday and might I say I was all Lotus'ed out. This time the Militant arrived earlier in the day and drove there in his car (Gasp! Long story, but it's been a good couple of weeks since the Militant visited a gas station, so all is still okay). Fortunately, the Militant knew the both the Festival and the Echo Park neighborhood well enough that he was able to easily score a parking space nearby.

Arriving at around 1:30 p.m., the place was sweltering, enough that the Festival staff set up a large water vapor fan aimed at the main stage audience (where the Militant found himself being cooled down periodically). Enough that he took advantage of that Starbucks van that blasted U2 music all day and gave out free Frappuccino shots. He also tried a couple bars of those kulfi ice cream (2 bars for $3; good stuff!) next to the Children's Stage. 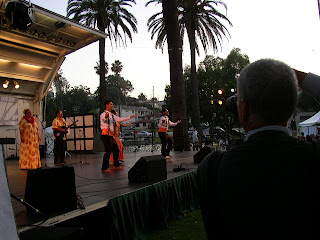 Having seen most of the sights on Saturday, Sunday at Lotus Fest was more a hang-out day, watching friends and other acts perform and running into other friends as well. In addition to seeing the Militant's soulful friends Elson and the Soul Barkada funk out in trio mode (nice Isley Brothers cover BTW), he also caught another trio, Sharp Three, whose bassist, Kai Kurosawa, played a 24-stringed oddity called a "BearTracks." Later in the evening, the People's Core Xkrima Close Quarter Combat Institute (say that five times fast) did a neato demonstration showing martial arts approaches to gain the upper hand at being held by gun, knife or physical assault. And to close the day, Hawaiian music duo Moana set the mood and gave a final "Aloha!" to the festival as the sun went down. The Militant caught Mr. Take My Picture himself, Gary Leonard, taking a picture of the act (pictured left). Other local bloggers have been quick to notice the lack of Lotuses growing in the Echo Park lotus bed. The Militant wanted to get down to the bottom of this, so he spoke to one of the Los Angeles City Recreation and Parks Department staffers who organized the festival. She told the Militant that last year (with the bed at half capacity during the festival), the bed was in full bloom in August. But the Militant told her he looked closely at the empty portions of the pond and found no evidence of future growth through the shallow, murky waters. She explained that it might have been due to not just this winter's cold spell but possibly insecticide that was sprayed in the park a few months ago (!!! That might also explain the dead red-eared slider turtle spotted floating in the water, mercy mercy me...). OMG, They Killed The Lotuses!

The Militant spent the final minutes of the festival hanging out with friends in the food court area, getting one last bite to eat. If you're into cheap eats, this is the place to be, with food plates being either massively discounted or sold with larger quantities -- they need to get rid of the stuff. One Filipino food stand even gave away free lumpia eggrolls in their final minutes. But one LAPD officer told crowds hanging out eating at barely past 8 p.m. that they had to leave the festival. Funny, I thought this was a public city park, and all Los Angeles city parks are open until 10 p.m. Of course, none of us Lotus Festivalgoers wanted to see any rubber bullets fly, so...

Obligatory Dodgers Corner
On a day that looked like a Throwaway Sunday (a.k.a. Tomko is pitching), The Boys In Blue pulled off a 5-3 victory and a sweep of the Frisco Gnats (and their 11th straight victory in Telecommunications Company Park). Best of all, it rendered Mr. Asterisk hitless throughout the entire series, which caused him to quip, postgame: ""It's an embarrassment to be wearing this fux0ring uniform." O RLY?

Immediately following the game, Telecommunications Company Park management fired-off an intra-agency memo to its entire janitorial staff and told them they can go home early. Why? Because the place had already been swept.
Commandeered by Militant Angeleno @ 12:40 AM

my bf has a theory that the lotus' aren't in bloom because of the lack of rain we've had this winter.

did you happen to check out the filam arts booth next to the mainstage? we were promoting for fpac (the festival of philippine arts and culture) hopefully militant nerd can check out fpac in september!

The Militant's scientific instincts wonder how rain has anything to do with it since there is always water in the lake, and Lotuses are borne out of water (believe it or not, Echo Park lake is fed by a natural underground spring and is not an artificial lake). As for the FilAm Arts booth, the Militant may or may not have visited the booth since he may or many not know people there and may or may not have the Festival of Philippine Arts and Culture on his schedule.

you may or may not have a busy schedule on your hands. if you have time on your militant schedule come check out tuesday night at the cafe in j-town at the eastwest players courtyard. it's right across the street from parker center.

The Militant is familiar with the bi-monthly Tuesday Night at the Cafe event on Judge John Aiso St. The Militant strongly believes there should be much more of these non-hipster artistic events around town, yet at the same time the people who organize and participate in such events should be willing and daring to infiltrate the hipster scene if only to teach them a thing or two.

I drove by the Lotus bed yesterday. A few are now blooming. Very pretty