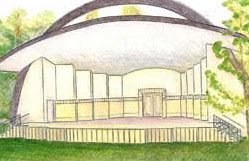 MacArthur Park has been melting in the dark for several years. But years of all that sweet, green icing flowing down and cakes being left out in the rain caused the folks at the City and the Mortimer Levitt Foundation to say that they don't think they could take it and found a new recipe for the unused bandshell at the park's northwestern corner, by 6th Street and Park View Ave. On Wednesday, August 8, the new, refurbished and renamed Levitt Pavilion Los Angeles will be unveiled, after it took so long to bake it. Like the 4-year old Levitt Pavilion in Pasadena and several others across the country, the LPLA will be an outdoor performance venue that shares the foundation's vision of funding communities that want free concerts under the stars. There will be a ribbon-cutting ceremony attended by the expected group of politicos who like to take credit for it at 6:30 p.m. on the 8th, with the inaugural concert at 7 p.m. Performing that evening will be the band May Melee and the Rubber Bullets.

Okay, just kidding with that one. Especially to the LAPD Senior Lead Officer who told me about the August opening event on Tuesday.

But once regarded as the hellhole of all urban ills in Los Angeles, the park has really seen a gradual upturn in recent history. The renovation of the park and the opening of the (M) Red Line subway station across the street back in 1993 was a modest start (along with the associated public re-discovery of Langers Deli). The opening of Mama's Hot Tamales Cafe earlier this decade brought some more momentum, as with the more recent and likewise acclaimed Chichen Itza (No Homer, I said Chichen Itza, not "Chicken Pizza...") Restaurant on the opposite end of MacPark, the missing link in the equation is the park itself. The bandshell has seen much finer days in the past, hosting big band, jazz and salsa concerts. This Militant, as a wee young teen, even had his first-ever band's first-ever gig in the bandshell during the independence day celebration of a certain unspecified foreign country back in 198x.

The new LPLA will have concerts 5 nights a week from August to October (and May to October come '08 and henceforth) featuring World, Dance, Latin, Children's and Roots (Jazz, Blues, R&B) music. This Militant is big on overcoming urban fears and perceptions to make things better, so when the music starts a-playin' at MacPark, whether on bike or via subway, the Militant will be there...and he hopes you will be, too.

Sometimes You Wanna Go Where Everybody Knows Your Name
On Monday evening, the Militant had another one of his adventures in his Not-Really-Eastside community, and this time it had nothing to do with a car, a train, a bus or even a bike. It was all on foot. See, the Militant was walking to his nearest popular local ice cream or gelato or nonfat frozen yogurt joint when he unexpectedly, by chance, ran into friend and fellow active community member "A." The Militant told "A" about what he was doing, so "A" joined the Militant and walked down the block to the popular local ice cream or gelato or nonfat yogurt joint. The Militant and "A" got their ice cream/gelato/nonfat fro-yo and had a productive chat about the community. When all of a sudden, across the street, unexpectedly, by chance, comes walking in friends and fellow active community members "B" and "C." So "B" and "C" join "A" and the Militant, hanging out on the sidewalk tables and talk about the community, gossip and some recent movies. After a while, "B" and "C" leave to go home, and "A" tells the Militant about some dream business plan he had to open an Eastern European-style beer kiosk business locally. Well all this talk about beer got the Militant suddenly craving for one, so he suggested to "A" that they continue their conversation a short distance away at this new establishment that this Militant passed off as some gentrified pub place that had some nice microbrews on tap. So as the Militant ordered a beer each for himself and "A," and an appetizer item. The dude at the counter asked The Militant his name for the food order and The Militant said, "[censored]." The counter dude said, "Hey, you're [censored] [censored], right?" The Militant assumed Dude At The Counter knows him from his community activities when Dude continued and explained that he knew the Militant Angeleno some 10 years ago as a customer support acquaintance. The Militant didn't recognize the face, but he certainly did remember the name. So The Militant asks Counter Dude, "So, you work here now?" Counter Dude replied, "Work here? This is my business!"

So unexpectedly, by chance, The Militant runs into an acquaintance from 10 years back who runs this establishment that The Militant originally passed off as some faceless bastion of gentrification. But being that this businessowner is someone he knows personally, who also knows other people he knows personally, the perception has changed. It's no longer an establishment to be feared or reluctantly patronized, but this is someone I know, who's trying his hand at running a business relatively unique to the neighborhood and that The Militant is more than welcome here.

Ultimately experiences like this remind the Militant that Los Angeles is really just a small town (albeit with an awful lot of concrete), and that though the Militant has made it his mission to open people's eyes and make people learn, sometimes, just sometimes, the Militant has to have his own eyes open so he can learn too.
Commandeered by Militant Angeleno @ 1:41 AM

Great posts, glad to hear that MacPark is getting better all the time. But now I have Donna Summer in my head. Thanks.

LA really is a small town. It's actually kind of weird.

I don't get it. Honestly, I'm not trying to be antagonistic, just to understand. Why did this place change from 'evil tool of gentrification' to 'cool local bar' just b/c you used to work with the owner? Or does it just illustrate the point that 'gentrification is in the eye of the beholder'?

Jeffto: It's neither. Basically, both sides of the issue have to take a closer look at each other. There are clearly cases where gentrification is a form of ethnic cleansing, where stores selling overpriced items and services are purposely meant to "filter out" "those dirty" locals. For instance, the unspecified community whose name rhymes with "Gecko Bark" comes to mind. But this place had reasonably-priced items and a staff and clientele that was not as exclusively white gentrohispter as I assumed it would be. Dassall. If I didn't convey that clear enough (which is likely the case when the Militant writes his entries after all the local 11:00 newscasts air -- as wee-hours repeats) then that's the case.

That's cool. I was just hoping to you'd elaborate a bit more, which you just did. Gentrification is a strange thing b/c it's kind of a grey area/thin line concept. Sometimes it improves destitute neighborhoods and it's hard to complain about that. But other times it prices natives of the area out of their own homes and homogenizes/de-cultures the neighborhood in its wake. That effectively turns a storied 'hood into a bland suburb.

You do a good job of espousing the philosophy that anyone is welcome if they aim to contribute positively to the community. I guess the only lesson is not to be quick to judge a book by its cover, or a bar by its facade.

Keep on, man. It's really good to hear your perspective on things.

jeffro: Yeah you got it. The Militant believes gentrification in light, controlled doses can work wonders to a neighborhood, improve the quality of life and even add to its diversity. But when rampant and uncontrolled it can and will destroy neighborhoods. Boy do I have some stories, but those are for another post. This certainly won't be the last time you'll hear me talk about this topic!

Donna Summer's song is buzzing around my head,too. Can't wait for the concerts to start. I've been going to the shows in Pasadena since 2003 and love the experience. Great story!