Getting 'Hye' in Little Armenia 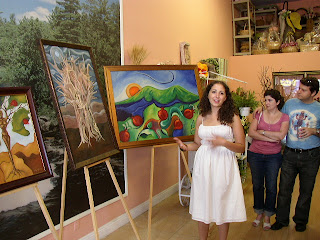 The 'ist gave you a glimpse, The Nerd told you about the event, now The Militant takes you there. On Saturday the good folks at LACommons in conjunction with the Armenian Center for the Arts organized a small festival and artwalk tour on the streets of E-Ho called, A Taste of Pomegranate: Sampling Art in Little Armenia. Named after one of the most culturally-significant fruits grown in Armenia, the event gave tourgoers some flavor of Armenian American art while at the same getting them Hye (FYI, "Hye" is Armenian for "Armenian" - now that you know that, be prepared for the "Hye" puns from here on out...).

The walking tour visited various Armenian businesses along Hollywood, Sunset and Santa Monica boulevards, some of which were turned into makeshift art galleries for the day. Roughly half a dozen arwtorks were displayed at each gallery stop and the GenX/Y-aged artists made presentations and answered questions for the visitors. Artists included paintings by Arpine Aleksanyan (pictured above) whose works contained iconic cultural Armenian images of pomegranates and Masis (a.k.a Mt. Ararat), and Sophia Gasparian, whose manga-influenced paintings on wood eschewed the likenesses of fruits and mountains in favor of more politically-oriented images from the perspective of a person raised in oppressive Soviet-era Armenia, where maintaining one's ethnic identity was a subversive act. The tourgoers were a diverse mix of Armenian Americans maintaining touch with their culture and non-Armenians (including a good number of Asians in this particular group), curious about gaining some Hye-r learning. 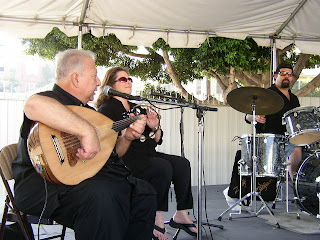 After two hours of walking in the hot July sun, a small festival took place at Rose and Alex Pilibos Armenian School (a.k.a. System of A Down's alma mater), which featured traditional Hye dance and music performances, such as oud player John Bilezikjian and his band (pictured right). There was even an unveiling of a public art mural, "Opening Eyes," done by local Armenian youths, which will soon be installed at Panos Pastry on Hollywood Blvd. The mural celebrated the ethnic diversity of the East Hollywood/Little Armenia community, though this Militant was just a wee bit miffed that a certain unspecified foreign language spoken by a good number in the community was not represented in the mural. 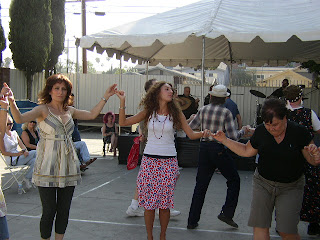 While many gathered and danced to Bilezikjian's music (pictured left), the festival also featured a mini-exhibit of black-and-white photographs by Ara Oshagan, who took pictures of the local Armenian American community from 2000-2004. This Militant, though not Armenian, was still able to Hye-ly identify with the photos, as there are many parallels between the images of daily life of the Armenian community and his own unspecified ethnic group. Best of all, true to the event's name and a great antidote to the hot weather, pomegranate-flavored snow cones were sold at the mini-fest at Pilibos School.

Though the Militant's compound was mere shouting distance away from much of the tour, the Militant was able to see his own 'hood through a different set of eyes, even learning more about the Armenian community, such as the cultural importance of Armenian American banquet halls, lavishly-decorated venues frequently rented for large, family-heavy events like birthdays, baptisms, anniversaries, graduations and wedding receptions (which make Greek nuptial celebrations as dull as a courthouse ceremony by comparison). The Militant even got to meet some cool folk during the tour, and even shared some of his own knowledge and experiences from his own unspecified culture. Because learning and exchange are some of the Hye-est forms of militancy.

The End of an Era 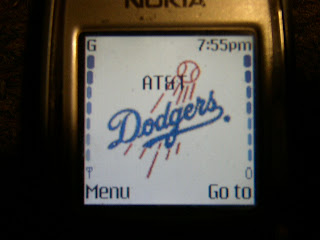 Friday was the day when the Militant's local cell tower changed its carrier ID signal to "AT&T" from the previous "CINGULAR." Always interesting, since AT&T, no, wait, I mean at&t was formerly Cingular Wireless, which bought the old AT&T Wireless. Cingular, for those of you who kept track over the years, started out as Pacific Bell Wireless, which is not to be confused with PacTel Cellular, which became AirTouch Cellular, which eventually became Verizon. Y'all still with me? Hey, that's just telesis -- progress, intelligently planned.