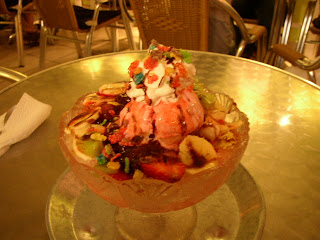 Most appropriate for summertime, this is the first in a series by the Militant Angeleno to feature the diverse array of ethnic iced desserts available in the Los Angeles area. Yeah sure, ice cream, gelato and fro-yo get all the press these days, but the Militant does not like to follow the crowd. Desserts based on ice are found in the cuisines of many different cultures around the world, and are not limited to Slurpees, Icees, Sno-Cones or Italian ices. From Korea to Singapore to The Philippines to Thailand to Japan to Taiwan (The Militant is even gathering some research on Latino iced deserts as well), The Militant will take you there, without even leaving town. GET CULTURED!

Before Pinkberry served the first customer on Huntley Drive, there was Red Mango. But before Red Mango served the first customers on the streets of Seoul (incidentally their USA site is devoid of any references to their Korean roots for some reason), there was the Korean shaved ice dessert called bingsu (also spelled "patbingsu," "patbingsoo," "binsu" or "binsoo"). Popular in the hot, summer months, it consists of a mound of shaved ice, topped with fruits (usually bananas, strawberries and kiwi), jelly, sweet red beans, syrup, mini-rice cakes (no, not the dry, crunchy ones you find at Trader Joes, more like Japanese mochi - but some Koreans (or Coreans, rather) hate it when they get referenced to Japan, long story...), cereal (Fruity Pebbles is a popular topping...see where I'm getting at now?), doused in condensed milk and sometimes topped with a scoop of ice cream. Ergo, the Pinkberry variant is more or less a simplified, "nonfat" version of bingsu. P'berry even serves a $7+ "Shave Ice" selection that is pretty much bingsu with frozen yogurt (Which the Militant actually finds to be the most enjoyable thing at P'berry, try it sometime).

Locally, bingsu can be found in...Little Ethiopia (just kidding). It's in Koreatown, of course and the most obvious place is Ice Kiss Cafe, located on west 6th Street (which incidentally boasts a Pinkberry, a Kiwiberri and a SnowBerry all within a one-mile stretch) and Kenmore Ave. The place also serves pastries, coffee, tea, boba and a small selection of soup and food items, but the main thing is bingsu (which is not referred to as such in the menu). Their eponymous "Ice Kiss" (pictured above) is the full-fledged bingsu here, which fits the aforementioned description, but they also offer simpler varieties, including red bean and green tea. And not to be left behind, yes, you can has fro-yo.

For a Militant like me who just came off of a 4-mile bike ride after seeing The Simpsons Movie, bingsu really hit the spot on a warm summer's evening. For the uninitiated, bingsu's (and that of most every other Asian shaved ice dessert) contents were made to be mixed around with a spoon, rather than just eaten sequentially (that's no fun). As with all of these kinds of shaved ice deserts, it's all about the contrasts in texture: The smooth texture of the fruits against the creamy texture of the strawberry ice cream against the more slushy texture of the ice against the dry, crunchy texture of the Fruity Pebbles. Call it a symphony, call it gestalt, whatever...it works. And it's delicious.

There have been more than a few reservations by bingsu connoisseurs on the Yelp.com site which complained about the freshness of the fruit, which was true of the banana, but it wasn't enough to dampen the Militant's experience. Besides, I'm a Militant, not a full-fledged foodie, so please bear with me. 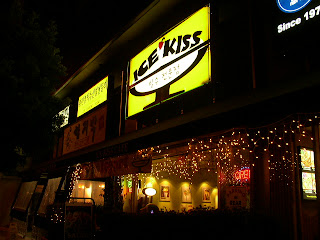 The small-but-cozy-establishment features mostly outdoor patio seating, which is most appropo for a July night like this. The clientele, aside from the Militant, was mostly Korean/Korean American teenagers to young adults, though a couple of Latinos were enjoying their desserts here as well. While the Militant enjoyed an Ice Kiss in a glass bowl sized for one ($6.99), The bingsu also comes in larger, dog-bowl sized (come to think of it, they look just like real dogbowls) containers, made to be shared in a group. Way more chill than the club-like environment of P'berry just a snowball's throw distance away, the outdoor cafe setting lent a pleasant urban feel to the place, as opposed to the glass-enclosed confines of You-Know-What-Berry. The Militant even gave extra points for the convenience of the sidewalk horseshoe just outside where he was able to park his bike.

For those seeking bingsu elsewhere, most "Cafes" in Koreatown serve bingsu/shave ice deserts. Among them the nearby Mr. Coffee on 6th and Western (in the same minimall as SnowBerry). Unconfirmed Militant sources also point to the Koreatown Plaza food court further south on Western. The Militant welcomes reader comments on other local bingsu spots.

Woohoo, you went to Ice Kiss! I just went there yesterday for the first time and will be blogging about them later this week. My friend and I got the dog bowl. :)

I don't think there's a pingsu place in the Koreatown Plaza Food Court proper, but there's a cafe right outside the food court that sells it (and it's good there). The Olive Bakery at the other end of the mall has pingsu as well, at least during the summer. I haven't tried theirs, so I can't speak for its quality.

there is a bingsu place in koreatown plaza. if you can't get it at the now-kyochon-chicken place in the corner of the food court or at the little snack place next to the restrooms also inside the food court, you can get it at either nicole's cafe right outside the court (in the mall) or in the bakery next to the market. Both will make it all the time, and they're both average.

That being said, there are a LOT of bingsu places and mostly average. Someone recommended Ice Kiss to me once and I was outraged I paid so much for something mediocre. I can make better at home :\ Or maybe it's the available flavor selection or ambiance (which, isn't much better either..) people like..

Or at least, I think Pinkberry's version of the bingsoo is a lot more bearable.

/me goes off to write a yelp review about ice kiss