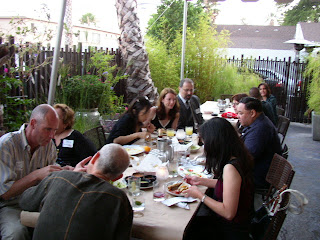 The Militant showed his face on Tuesday night at a live meetup of foodies from the Chowhound Los Angeles Area message boards. It was the first time the Militant did one of these "meets" in a long time. The Militant is old enough to have engaged in a now-archaic form of online communication called a Bulletin Board System during his college days (think of it as a dialup local text-only version of the net...okay, you probably can't even fathom such a thing, but they existed) where they would have regular "meets" off-line where people would meet each other in person. The fact that Chowhound also employed the term "handle" instead of "username" or "screenname" was an added nostalgic bonus.

The Chowhounders met up at the chic taqueria Malo in Silver_Lake where we got to dig into the restaurant's trademark ground beef and pickle fried tacos, in addition to some other modernized Mexican fare. Pretty good (despite the consensus of the online Chowhounders), and not just because the food and drinks were on the house. The Chow.com organizers (who work for CNET) even gave away free Chowhound swag in the form of t-shirts (from that silky American Apparel stock) and some canvas bags.

But far surpassing the food was that the Militant got to meet some really cool Chowhounders there (for the sake of fairness and privacy, the Militant will not identify in this blog who he met - and he expects any other Chowhounder reading this to observe the mutual hush-hush, if you know what I'm sayin'), which was totally contrary to what he initially thought they would be, having closed down the browser window in disgust after reading one too many overtly snobbish reviews, especially from NY immigrants who somehow believe Chinese food was invented in Manhattan.

Most of the Chowhounders there appeared to be in their mid-30s and older and of upper-middle income and higher. More than half were white, with a considerable number of Asians, and a small number of Latinos. Only one person there appeared to be of African American heritage.
A couple people were retired and that being a foodie was their "hobby" while a few actually worked in the culinary/restaurant industry. Surprisingly, very few 20-somethings and and even fewer hipster-types (Oh, they're easy to spot, trust me) were there.

But overall everyone seemed to be pleased to be in each other's company. The easy icebreaker was the revelation of people's handles through nametags (i.e. "Oh, you're Chowzilla? I thought you were a dude! Nice to finally meet you!") and though most of the talk gravitated towards eateries (the event became a live, in-person iteration of the message board), people inevitably wanted to get to know about the lives of each other.

The Anonymous Militant can feel the pangs of irony when he says that the Internet really needs that frequent "personal feel" where people of like minds or at least similar interests can meet face-to-face as actual human beings. And in this era of flame.wars and the like, events where internet users can see each other as not only as real living personalities, but any sort of negative objectification on the part of certain people beforehand would likely be greatly diminished.

So will there be a Militant Angeleno meetup anytime soon?

The answer is LOL. 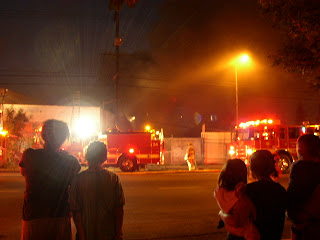 After the Militant's foodie meetup, he happened to see a towering column of thick smoke near his next destination, looming above the 10 Freeway. It was a warehouse fire on Adams and La Brea in the Mid-City area just below The 10. No homes were in danger, but no fewer than five Los Angeles Fire Department ladder companies were at the scene as Adams Blvd. was shut down at La Brea. The building on fire was a business called P.C. Sets, which according to one local, builds props and sets for film and TV studios. Another neighborhood local told the Militant that several nondescript buildings in the neighborhood without even so much as a sign outside are companies that build props or supply equipment to the studios in Hollywood, The Valley or Culver City. They are located in the Mid-City area for their lower lease rates. The cause of the fire was not yet known, but arson investigators were on the scene. No occupant was known to have been killed or injured but an LAFD firefighter who was on the roof fell through and suffered 2nd and 3rd degree burns as well as broken bones after an intense rescue operation by his fellow firefighters. He is recovering at Cedars-Sinai.

For those of you who have never witnessed a firefighting scene, the LAFD operates like clockwork and the amount of diligent and spontaneous teamwork demonstrated is something that just has to be seen to be believed.

That entire stretch of the north side of Adams Blvd. from La Brea Ave. to Redondo Ave. is slated to be redeveloped into a large retail development with a public open space element. It is part of the City of Los Angeles' Community Redevelopment Agency Mid-City Recovery Redevelopment Project.
Commandeered by Militant Angeleno @ 12:43 AM

Now you’re aging yourself with talk of bulletin board systems.

I was the sysop (system operator) of a Wildcat BBS many years gone past, and the user parties grew from a dozen users to over one hundred every other month, which made me move the parties from the pizza parlor to the local park.

My computer at the time was a powerful IBM AT, running under DOS 3.3, with real floppy drives (5.25), and my users connected at the lightning speed of 2400 baud with dialup connections. As an example for younger users, a one-megabyte text file would take one hour to download; today that same file takes a matter of seconds to transfer.

Blogging has turned back the clock as users get together for different events, and I’m certain our paths will cross one day soon.

Ed: O RLY! Which one? The Militant (not yet known as the Militant at the time) was once a member of many Wildcat-based BBSes.
Many of the Militant's operatives (over age 30, that is), got their online training wheels in the BBS world, so "e-mail" was already a familiar concept when they got on the Net. The Internet was first introduced to the Militant by a college professor (not his) who told him that he could chat and email people on the other side of the world. The Militant found that extremely hard to believe initially.

Yes, I'm sure our paths will cross, but you will never know it is me.

We may have already met? I ran Child's Play BBS out of La Puente. Ring a bell yet?

While at the Media Bistro party at the beginning of the year I was informed there is a movie about BBS's. I'll watch it one day?

If you knew me back in the day I used my middle name, Doug, but after my divorce I started using my first name.

Back to work for myself.

Duuuude! I saw the fire on my way home from work that night.