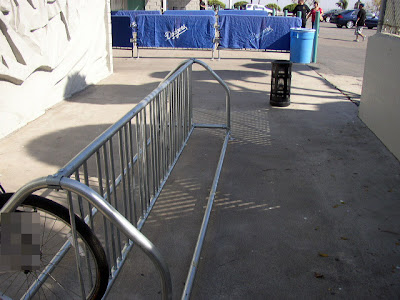 The Militant rode his bike up to Chavez Ravine on Friday afternoon to pick up his Opening Day tickets, and what a fine opportunity to check out this new bike parking facility that's been talked about lately.

So behold: standing some 50 feet west of the main ticket office outside of the Stadium's Top Of The Park souvenir shop is your Dodger Stadium bicycle parking facility -- all eight feet of it in its shining aluminum splendor.

On the awesome side, the Militant (who has definitely done this kind of thing before) may or may not have been the first cyclist evar to lock up his bike in the new Dodger Stadium bicycle parking facility (pictured above). The Militant Makes History! 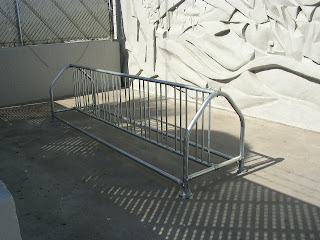 But on the foul side, designed for 20 bicycles (perhaps more if you're creative enough), this bike rack, known in cycling circles as a "wheelbender" is normally frowned upon by more experienced bicyclists, as not only, as its moniker suggests, do they allow thinner-wheeled bikes to get bent more than a Bart Simpsonesque insult, but if you don't park your bike correctly, they can leave you with 2/3rds of your bicycle missing.

Truly, with this being the Dodgers' Golden Anniversary season, and with owner Frank McCourt having more money in his pocket than the Militant probably has in his entire bank account and credit spending limit combined, the organization could have put up a bunch of horseshoe racks, wonderfully painted in Dodger Blue, in Lot P, but nooooo.

It's like getting underwear for Christmas from Santa Claus. Certainly functional, but not quite the Nintendo 64 that Wii we asked for.

Well, that's strike one. Maybe the Dodgers can go yard in the future if they heed cyclists' advice and implement better bike parking design.
Commandeered by Militant Angeleno @ 5:23 PM

Wow. They actually installed something!

They couldn't find a more secluded section if they tried.

I would love to see some people who put in bike amenities put actually some thought into the safety of the bikes as well as safety of those who pick up their bikes.

A well lit open space would be nice. How about some cover in case of rain. And U-Lock racks! Oh, and did I mention visibility?

Ok, I agree, the bike parking is kind of lame. That said, if people use it, and the rack fills up, then it will be easier to get the Dodgers to take a greater action. If noone uses it, then they invested the right amount, nearly nothing. If people use the facility, they (hopefully) will improve it.

Justin: The Militant agrees wholeheartedly. He encourages all bike-riding Militant Dodger fans to use the hell out of that thing, so we can hopefully get an upgrade sooner rather than later.
Certainly we can have 20 bike riders out of 56,000 fans use that thing, if not more. Plus you get to save $15 (Fifteen Dollars?!?) and get to leave the stadium grounds in under three minutes.

This is interesting information.... Keep posting such an amazing blog post. Thanks a lot for the share...

Really great post, Thank you for sharing This knowledge.Excellently written article, if only all bloggers offered the same level of content as you, the internet would be a much better place. Please keep it up!