Cruising Down The 'Shaw...Er, On A Bike 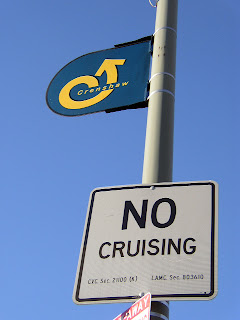 When the Militant was ready to attend an unspecified consultation meeting with an unspecified non-profit agency based in Leimert Park on Monday, even though the location was over the Militant's 5-mile bike trip radius, he decided to two-wheel it for the eight-mile trip anyway since it was such a beautiful day. The sun was shining, and it was perfect bicycling weather: Warm enough to enjoy the sun, cool enough not to sweat profusely under the sun. Besides, having sequestered himself indoors for most of the past two months, it was time to get some sunshine, as his unspecified shade of brown skin was starting to lose some of its melanin content.

Having biked to the general area before late last year, he knew the general way there. So it was all a matter of cruising down the 'Shaw - Militant style.

While riding down, he passed a minivan blasting Ice Cube's "Today Was A Good Day" on its stereo. A good omen, perhaps.

The 'Shaw, or "The Strip," as some locals call it, has always been a dynamic neighborhood. Originally a multicultural community where former mayor James K. Hahn and former city councilman Mike Woo grew up, it has also seen a massive change from the early '90s, then a victim of the '92 Riots. Today, there are not only many shops on The Strip, but important institutions like supermarkets and banks, which were noticeably absent in the community before 4-29-92. Now there are banks in every other block, and the requisite Starbucks, Krispy Kreme and, yes, a Wal-Mart, which in itself was a work of Magic.

The Strip is adorned with streetlight medallions bearing the design of a letter "C" with the lower section curving into an upwards-pointing arrow, indicating a community on the rise.

But aside the the commercialism, which in this part of town was a welcome sight, it still maintains its true flavor, especially south of Martin Luther King Jr. Blvd and east of Crenshaw, where Leimert Park lies, the hub, heart and soul of modern African American Los Angeles.

The Militant's meeting was over lunch, which took place at Ackee Bamboo, where he had a tasty and affordable dish of Jerk Chicken. It was a nice day, so the meeting party met outdoors in the courtyard, just across from the relatively new location of 5th St. Dick's Coffeehouse, one of the staple venues of today's jazz scene. 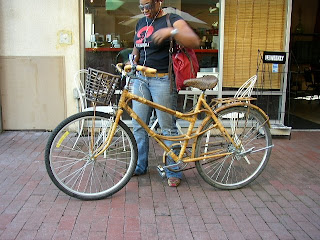 It was there where the Militant saw what appeared to be a bamboo bicycle (pictured left). The owner told the Militant that it was actually a conventional metal-frame bike, but was covered with bamboo. She also explained that she bought it like that. The Militant told her to "Stay Militant!" as she grinned and rode off.

After the Militant's meeting, he had time to observe the rest of the community as it plays out its everyday life, from two elementary-school aged children taking violin lessons from a musician in Project Blowed's hip-hop performance space to locals just hanging out in the park, enjoying the day. This is a community with its own distinct flavor from its afrocentric novelty shops to its solid musical institutions, including the World Stage and the legendary Babe's and Ricky's Inn, where your $8 cover on a Monday night gets you not only the best blues in town, but a soul food buffet as well (Militant deal!).

On the way back, the Militant also snapped a few pics of The 'Shaw. Checkit: 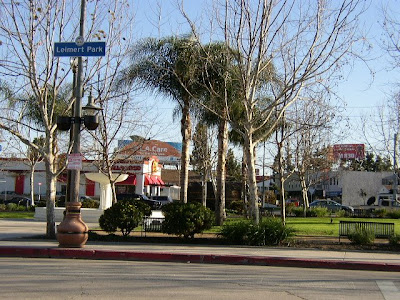 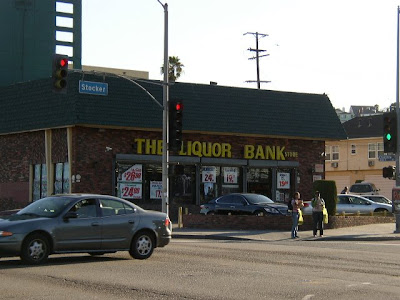 It's a Store: The upturn in this community had been the emergence of banks and other financial institutions. But lest anyone thinks they can get a loan at this business, the sign specifies itself as "THE LIQUOR BANK Store." 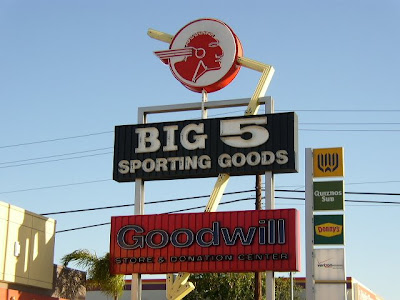 Sign of the Times: This shopping center on Crenshaw and Coliseum was once home to a legendary bowling alley and the Majestic Pontiac dealership. The lanes and autos have long gone, but the sign has been preserved. 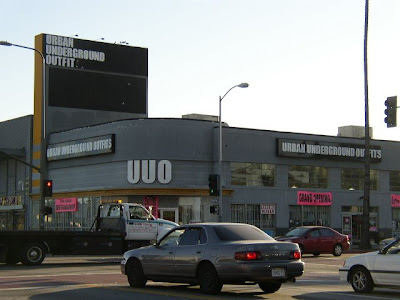 Not Mainstream: Urban Underground Outfit makes it clear the other "urban outfit" type store is too mainstream for this community. 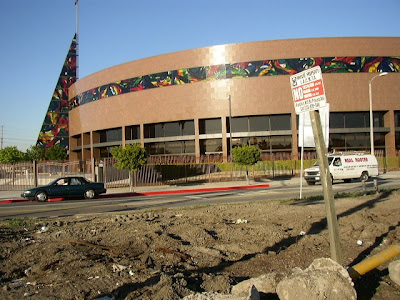 Light Rail Cross-ing: The West Angeles Church of God in Christ stands just across Exposition from the future site of a Metro Exposition Line station.

Commandeered by Militant Angeleno @ 1:48 AM

But whether the magic is literal or figurative, from what I understand there are plenty of smaller businesses in the vicinity of the Wal Mart that aren't too happy with the place.

And I'm pretty sure the services for Randal Simmons were at the Crenshaw Christian Center Faith Dome on Vermont.

Will the Inevitable: Yes, that's sort of a given when a Wal-Mart pops up un any community. But it was a slight commentary on how Wal-Marts are largely suburban phenomenas. And when the Militant sees a pun, he goes for it.

The Militant stands corrected on the Simmons memorial site. One the Militant's operatives attended the service and even showed him a copy of the program. So he thought...

fours years removed from the "Shaw" I found M.A. blog bringing warm thoughts of the hood back here to STL, the Lou, hook me up with more of your tales from my old hood.

wow!!! what a trip, and all made it in a bike? impressive, your physical condition must be the better to make something like this.