The Festival For Bangladesh 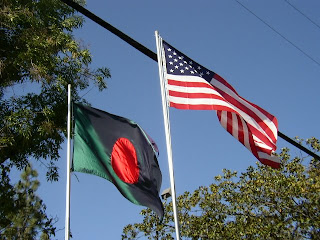 The Militant takes time off from talking about the Dodgers to bring you coverage of a local cultural event!

The local Bangladeshi community threw a two-day festival this weekend featuring a parade and cultural fair at the Shatto Recreation Center, near 4th and Vermont in Koreatown. The Militant, who mentioned the community before in a previous post, rode down there Militant-style on Sunday afternoon to check out all the action and learn more about one of Los Angeles' newer immigrant communities.

The South Asian country of Bangladesh, relatively small in size, lies under the eastern "panhandle" of India and faces the Bay of Bengal, whch is part of the Indian Ocean. Bearing cultural similarities to certain regions of India, Bangladeshis speak Bengali and are predominantly Islamic.

Numbering roughly 2,000 and growing in Los Angeles County, the Bangladeshi community is currently centered around the northeast corner of Koreatown, in and around the Vermont and 3rd Street corridors. Many of them attend prayer services at the nearby Islamic Center of Southern California any Bangladeshi markets and restaurants, marked by their availability of Halal products and menus makes them a culturally visible community among those of many other cultures in the area.

Los Angeles City Councilman Tom LaBonge, who represents the area, was an invited guest in the festival's program and said, "If you put a pin on a map on 3rd on Vermont and drew a 1-mile radius circle around it, you'd have more people from countries than the United Nations." The organizers from the Bangladesh Unity Federation of Los Angeles told the councilman that the community desires to have a community center and a "Little Bangladesh" designation somewhere in the area.

Though the Militant unfortunately missed the parade, he was able to catch the festival-- which, apologies to all you Dodger-weary readers seeking a diversion - took place on the recreation center's baseball field -- which was very similar to other cultural festivals the Militant had attended. There was a main stage, seats for an audience and tents with food and clothing vendors, and booths offering satellite TV services, political awareness and one from the Los Angeles County Sheriff's Dept. (Sheriff Lee Baca was there earlier in the day). 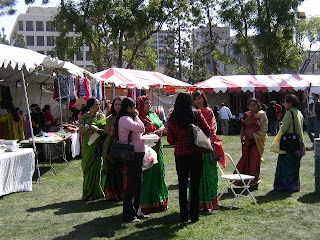 And like other ethnic festivals, there were various generations represented -- the older native-speaking crowd, and the English-speaking, American-bred youths, of which one group of teens raved about the latest Bluetooth cellphone headsets amongst each other.

The Militant's main draw was the food. His first exposure to Bangladeshi cuisine was not a very impressive one, but he was willing to give it a second chance, and wasn't disappointed this time. He had Bangladeshi poori, a similar fried, puffed bread as its similarly-named Indian cousin, but this version was stuffed with a thin layer of lentils and served with a ketchup-like sweet and spicy sauce. He also had something called "zapuri" (sp?) which was a tasty salad made up of puffed rice, dried lentils and wheat sticks, peanuts, chopped cilantros, diced chiles, oil and salt, shaken up together. Pretty good and healthy too! He also treated himself to a cup of mango lassi and a small bag of kotkoti, which is a Cheeto-shaped crunchy fried wheat snack with glazed sugar.

In addition to the Militant, there were other non-Bangladeshis there, sampling the culture, including local African Americans, Latinos and Koreans, also sampling the food and perhaps getting their first taste of this culture.

One commonality of immigrant cultures is a connection to a tragic historical event in its native country. For the Bangladeshis, it was the 1971 Bamgladesh Liberation War in which Bangladeshis ultimately gained independence from Pakistan, but not without the loss of three million Bangladeshi lives during that war which they consider to be a genocide. The late former Beatles guitarist George Harrison's Concert For Bangladesh was the western world's likely first introduction to the country and its turmoil, and Harrison is regarded as a cultural hero among many Bangladeshis today. The organizers at the festival evoked Harrison's name and even LaBonge brought up his Los Anga-les connections and invited the Bangladeshi community to join him in a future Griffith Park hike (because that's how LaBonge does it) as they plan to dedicate a section of the park to Harrison.

The Militant looks forward to hearing more about this growing community and awaits the arrival of "Little Bangladesh" one day soon.
Commandeered by Militant Angeleno @ 3:07 AM

blog you really interesting aspect to comment on my culture bangladesh