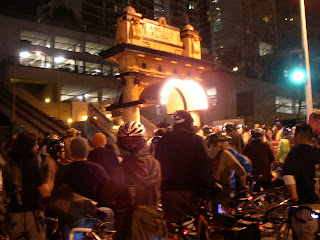 It's Friday night, the first of the month. Looks like a prime opportunity to go on a ride.

In his first Ride-Arc ride of 2008, the Militant joined about 90 cyclists in a 14.5-mile old-school urban transit themed ride where they looped around from East Hollywood towards Downtown and through Elysian Valley to Silver Lake which took them to the last remaining remnants of the Pacific Electric's Red Cars and the Los Angeles Railway's Yellow Cars, as well as other related points of interest.

Relics witnessed by the group were the old "H"-line Yellow Car tracks by the site of the old Bimini Baths - still existing in a very short section, the old Pacific Electric Subway Tunnel (now covered by an apartment complex), the "SUBVAY TERMINAL BVILDING" [sic] (now an expensive loft complex) and the old Pacific Electric headquarters (gee, you'll never guess what kind of building it is now...). The riders also paused in front of Angels Flight (pictured above), wondering - as much as the Militant does - when the hell it'll start running again. 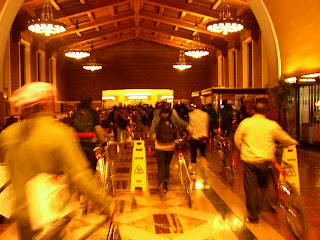 The group also walked through Union Station (pictured right) to the other side (no, it's not lofts now, but they did build one next door, guess that counts too) and ended their trip by the site of the old concrete pilings of the old Pacific Electric Fletcher Drive Bridge.

The hard part for the Militant was keeping his mouth shut, which he was able to do. Why? Because there was sooo much the ride missed in terms of Red and Yellow Car relics, some of which have been covered by the Militant in previous posts, which the ride organizers would have been able to find had they been enlightened enough to read This Here Blog. But in case you went on this ride, you probably would have missed stuff like the old "V"-Line Yellow Car tracks by Los Angeles City College, which are still somewhat visible through the asphalt (the fact that the ride originated just yards from this site and the Ride-Arc organizers overlooked this made the Militant ROTFL) and of course the Militant's "H"-line "crack addiction" find at Heliotrope Drive and Rosewood Avenue. And no mention of the Orange Empire Railway Museum was mentioned at all, which is one of the few places in the world one can ride the surviving Los Angeles trolley cars (and the fact that the Militant vlogged it recently was testament to the fact that they obviously don't read This Here Blog). Hmph. Oh well, just proves no one in the blogging scene gives the old trolleys as much love as the Militant does.

Oh well, the fact that they don't read This Here Blog means the Militant can talk as much smack about the Ride-Arc folks as much as he wants...but he guesses it won't stop him from that fact that he may or may not look forward to next month' s ride.
Commandeered by Militant Angeleno @ 8:14 PM

Hey MA, good to know you were on the ride. I don't run RIDE-Arc, but I can state (for what it's worth) that the connection you made with LACC and the trolley line was a reason that the ride started where it did. Also, for logistical reasons, the number of stops has to be limited.

I thought the Ride Arc organizers did a great job of putting on an informative tour. I learned something new and all the stops were very relevant. Plus as the previous poster said, "For logistical reason, the number of stops has to be limited." Have you ever thought about volunteering to help organize a ride?

Anonymous: Yes, definitely, the Militant, on many occasions, has thought about volunteering to help organize a Ride-Arc ride.

But for logistical reasons, the Militant would not be able to, as doing so would severely compromise his anonymity. :)