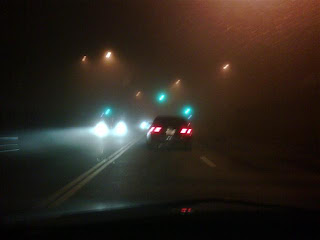 The Militant began 2009 by attending not one, but two New Year's celebrations, in unspecified parts of the City. En route from the first celebration to the second one, he did notice that it was awfully foggy out there. So foggy, he had to turn on his foglamps. Pictured left was his first photo of the year, taken while driving up Arlington Avenue on his new Militant Phone, which was acquired recently.

Of course, there's a new law on the books, effective today, that prohibits texting while driving, but the Militant wasn't texting, just taking a picture (and has the picture to prove it, duh...). As far as he knows, there's no law against taking pictures while driving. But he need not worry, since the fog was so damn thick that no law enforcement office could even see what any other driver was doing.

There's a lot in 2009 that the Militant looks forward to, so it's gonna be a great year folks. At least this Militant thinks so. What do you most look forward to in this City this year? Feel free to post it in the Comments section.
Commandeered by Militant Angeleno @ 2:39 PM

I wonder if the police will ticket you if you are texting your GPS? I guess I will have to check out the law...

Philpalm: Dunno! Some GPS devices have some sort of "Do not manipulate while driving" warning when you switch it on. Technology is a huge grey area anyway; the Militant's new Militant Phone also has GPS capability. But since the Militant knows virtually all of Los Angeles' streets by heart, he has no real need for it.