Talkin’ ‘Bout My Gentrification: Danny Hoch’s ‘Taking Over’ at the Kirk Douglas Theatre 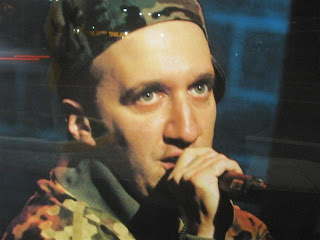 Now the Militant, in his infinite Militant Angeleno-ness, usually does not lavish any sort of praise on a native New Yorker (Vin Scully and the Dodgers exempted, of course).

But when he was given a chance to see a preview performance of Danny Hoch’s one-man play Taking Over at Culver City’s Kirk Douglas Theatre, the Militant was simply floored.

For those not familiar with Hoch, he’s a Gen-X-age writer, director and actor from Bwooklyn (his accent is expectedly blatant) known for his “Hip-Hop Theatre” productions, like 1998’s Jails, Hospitals & Hip Hop, where he plays a myriad of diverse characters endemic to his native borough environs, while exploring issues of race, class and societal issues in the story.

His current play, which explores gentrification in the Brooklyn neighborhood of Williamsburg (think of the east coast equivalent to Echo Park/Silver Lake) through the portrayal of several characters: A Puerto Rican graduate student, a 60-something African American woman, a middle-aged Jewish landlord, a Dominican immigrant taxi dispatcher and a 20-something white hipster chick, among others.

Although the Militant has been to NYC a handful of times before, he’s never set foot in that particular part of Brooklyn, yet he totally identified with the subject matter.

For others, not so much. One performance earlier in the week had someone, visually offended, walking out of the theatre. In one scene the actor plays himself in an epilogic scene where he reads aloud some of his “hate mail.” Hey, art, after all, is supposed to elicit a reaction.

Though the Williamsburg situation seems more hyperbolic and extreme (million-dollar condos have not come to Echo Park – yet), and one of the characters’ indignant provincialism, though obviously well-intentioned, seemed a bit off-putting to even this Militant (or maybe us Californians are just more accommodating creatures, dunno…), in spirit, it was not a totally alien place for the Militant. Issues of how the locals enjoy things like safer streets and the availability of soy milk, only to discover that those trappings were not designed to be meant for them, or how one character is totally ignored by the hipster newcomers, are all too familiar themes for this Militant.

All is not heavy and brooding at all – a great deal of the play is presented as clever humor and well-executed comedic monologues (the reading of a coffeehouse’s weekly Calendar of Events is true comedy gold in its accurate portrayal of hipster entertainment). But some may find out that they are the ones being talked about here.

The Militant had a brief chat with Hoch after the show - one hardcore native New Yorker and one hardcore native Angeleno – and though they may not agree on sports or food, they both came to the accord that hipsters are a universal problem, and that it’s not just enclaves in New York and Los Angeles getting gentrified. One scene even confirmed the Militant’s belief that rampant gentrification can leave even the hipsters as victims of neighborhood change, as they get replaced by more upscale types.

Another aspect the Militant believes is praiseworthy is not just Hoch’s performance, but his endurance. The 90-minute play runs without any intermissions, and the actor has but seconds to transform from one character to the next. His voice was so thrashed after the show that when the Militant had his conversation with him, it was kinda like chatting with a mime. 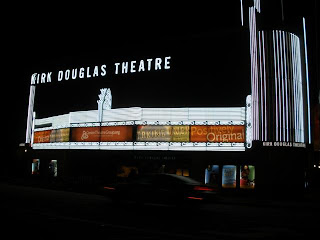 Anyway, despite its NY origins, this play turns gentrification into a more universal issue. So with that, Danny Hoch’s Taking Over is 100% MILITANT APPROVED!

The show’s official premiere night is tonight, January 23. So run, don’t walk, to the Kirk Douglas Theatre by February 22. YOU. NEED. TO. SEE. THIS. And aside from spreading the word through this here blog and on his Facebook profile, he will also drop some flyers for this play at Intelligentsia Coffee in Silver Lake and at the American Apparel store in Echo Park. Heh heh heh...
Commandeered by Militant Angeleno @ 3:54 PM

"One scene even confirmed the Militant’s belief that rampant gentrification can leave even the hipsters as victims of neighborhood change, as they get replaced by more upscale types."

That's the story of Downtown lofts in a nutshell.

The Onion has it right:

Well-written review. Keep those hipsters away!