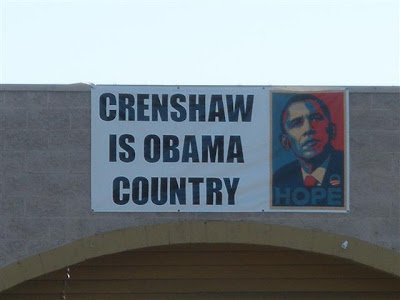 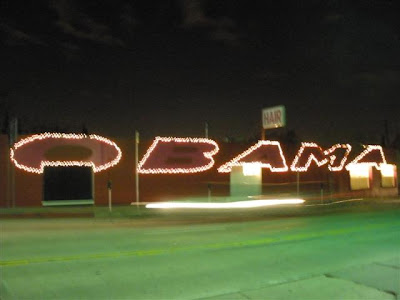 Obama sign outlined in lights, Conrad Hair Salon on Fountain Avenue, Silver Lake.
Now that President Barack Obama is officially livin' large and in charge, it makes the Militant proud that we have a president who was - at least for two years - an Angeleno. Though the president is more associated with Chicago, Honolulu, or even Jakarta, Los Angeles was one of the places where he once lived (his first exposure living in the continental United States), and it no doubt had an influence on him.

According to a Times article published last year, a high school-aged Obama met a tourist girl on the beaches of Hawaii who lived in Brentwood, and told him exciting stories about about her hometown, so the young Obama headed "out east" to Los Angeles' Occidental College in Eagle Rock for his undergraduate studies. He must have learned something here, since he arrived as "Barry" and left as Barack. So our City deserves some credit for shaping the guy.

After much Militant research, the Militant has compiled a map showing 15 points of interest around Los Angeles with a significant connection to the president:

View Larger Map
Click on the blue markers for a detailed description. Here are the places, in chronological order: 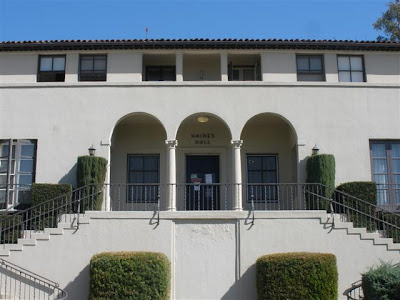 2008-2009: Crenshaw Boulevard - Where Obama merchandise is sold by street vendors, mostly between Adams and Exposition.
Commandeered by Militant Angeleno @ 2:25 AM

"December 20: George and Barbara's second child, Pauline Robinson Bush, who will be called Robin, is born in Compton, California, where Bush's job has taken the family. They will live in Whittier, Huntington Park, Bakersfield and Compton before transferring back to Midland, Texas, in 1950."

There's a picture of the Bushes in Compton, but I can't remember where to find it.