You Get Less For More These Days 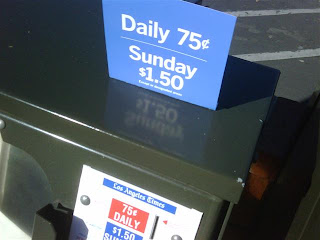 The Militant awoke from hiw winter hibernation a little earlier than expected -- he thought from the nice, warm, sunny weather it was April already but was surprised to know it's still only mid-January. So he decided to take a little stroll down an unspecified east-west thoroughfare when he took a peek at a newsstand to find out what's going on in the world and exactly what day it was today.

Then he noticed it.

Okay time out, let's let that sink in.

The Militant is well aware of some of the recent changes to the paper, the shrinking physical mass (and local coverage) notwithstanding. As mentioned before, the Militant still digs reading a physical paper, as it's a nice way to pass the time riding the (M)etro or sitting on the can (even one of these). And the Militant loves seeing the rear page of the Sports or Business sections to see what's on sale at Fry's this week for the latest high-tech gadgetry to blow his Militant income on. And surely people will mob and claw at each other in a Black Friday-like frenzy over copies of the January 21st edition of the Times...or any newspaper, for that matter.

I noticed this recently as well. I was a bit shocked, but... they gotta make money somehow and at least it's not 500 more random layoffs?

fatpinkchicken: Guess so. Don't they make enough from Macy's, Target and Fry's ad revenue? Why don't they just up Donald T. Sterling's ad invoice? That fool's got nothing better to do with his money.

BTW, were you at 7th Street/Metro Center station last Thursday? The Militant swore he walked past someone who looked like you.

we all know the times is in trouble, especially considering its parent company filed for chapter 11 last month. if they don't figure something out soon, they may be forced to become online-only before the year's out. :(

but a 25-cent increase is nothing compared to the fare hike on the flyaway. instead of $4, it's now $6?! how can they honestly justify that large of a jump?

The Times tried to jack my subscription rate from $8/mo. to $12. After 23 mins. of telling them how I've been a subscriber for 25 yrs., I got them to give it to me for $4/mo. but I had to pay up for the whole year. Ratbastards!