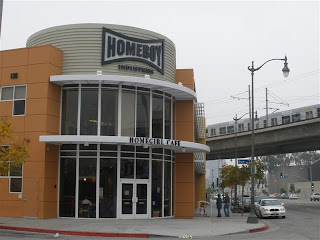 The Militant decided to kick off the new year with some new places to check out, and some changes.

First of all, the Militant's wannabe-foodie spinoff blog, The Militant Angeleno's Mess Hall, has proven to be an abyssmal failure, resulting in all but one post in all of 2008. The Militant hangs his head in shame. But the good news (at least for anyone who cares), is that instead of being a separate blog, the Mess Hall posts will now be integrated into This Here Blog, so the Mess Hall will now live on as an ongoing series of posts.

Eventually, the Militant will migrate the archived Mess Hall posts from the other blog into this one.

In accordance with the Militant's own New Year's Resolutions, he continues to cover eateries of note. Today he visits Homegirl Cafe's new digs, located right on the edge of Chinatown, along Alameda Street.

For those not in the know, Homegirl Cafe is a subsidiary of Homeboy Industries, which is an awesome Angeleno story unto itself.

Homeboy Industries was created circa 1992 in The Eastside's Boyle Heights by priest and native Angeleno Fr. Gregory Boyle, who started a unique enterprise to get rival gang members off the streets and into jobs. The whole deal was to give gangbangers job skills training, a steady income and something to look forward to as a way out of the thug life. The enterprise started by making tortillas and bread, then t-shirts, and eventually branching out to serve the homegurlz.

The first Homegirl Cafe opened in Boyle Heights, along with the rest of the Homeboy operation. But as the enterprise grew, there called a need for larger digs. The cafe is located on the ground floor of the new Homeboy Industries building.

Situated on the eastern edge of Chinatown along Alameda street, the new headquarters of Homeboy industries is perched at a symbolic location: Within sight of the notorious Twin Towers Detention Facility across the tracks, yet closer to both Chinatown, a place built on prosperity and mutual financial community support; and Union Station, a symbol of mobility and central hub of movement.

The building had long been a curious sight for the Militant every time he rode the Gold Line, in which its elevated tracks skirt its southern end. 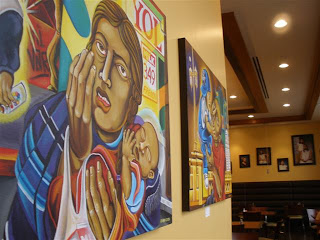 This time, he got off at the Chinatown station and walked across the street. The place looks clean and modern, with works by artist Jose Ramirez adorning the walls. And on this Friday after New Year's, the lunchtime crowd was rather busy. He didn't feel slighted, though, as three other tables were waiting as well. But the wait wasn't as extraneous as we all eventually got service within a few minutes.

The Militant ordered the half Yuyu's Sandwich (Turkey with dulce de mango and chipotle, lettuce, tomatoes, onion and mayo) and cup of soup, which was arroz caldo (chicken rice soup). The soup really hit the spot on this chilly winter day, and the little bit of jalapeno chile in there was a nice kick. The sammich was divine, the mango preserve added a sweet touch, the chipotle added some spiciness and the ciabatta-style bread that surrounded the contents worked together in an amazing way. 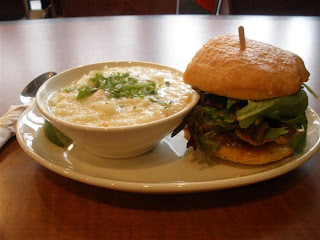 One would blindly assume that a staff of 25 made up of former gangmembers and at-risk youth would give people some 'tude, but not so at all (Ergo, the Militant would much rather eat at a restaurant staffed by former gangbangers than wannabe actors any day). The young ladies that serve here at Homegirl are perhaps the nicest, most courteous and polite restaurant staff you could find, and the Militant recommends you tip generously. The Militant also noticed the servers get most, if not all of their take, as after he paid at the counter, the woman at the counter gave his server the full contents of his food purchase, saying to her, "Here, this is yours." The operation is a non-profit enterprise, so the overhead, the Militant assumes, is handled by grants and donations. They also offer catering services.

According to the Homegirl Cafe website, the cafe has an agreement with local restaurants Ciudad and Border Grill offering a job training program for Homegirl Cafe staff to work in those eateries. Cool deal. Homegirl Cafe is definitely worth a visit. Show your love, you your supports, show your appetites.

Great review! I just ate there today and it was fantastic. The jalepeno pesto kicks ass, and like you said, all the ladies who worked there were super sweet. I can't wait to go back and try all three of their vegan taco varieties!

I feel like I let you down, MA. I really was looking forward to being part of your community restaurant blog, but found I barely had time for my little shindigs of my own. Good luck with your new foodie path!

Miles: Nah man, it wasn't your fault, it was the Militant's fault. He just never really kept it up. Thing is, he's got a backlog of photos of many local eateries that were meant for the Mess Hall that were never posted. But at least when he visits them again, he'll have some source material.

I've eaten at the OG locale in Boyle Heights and it's tasty. I'll have to go again since it's moved closer to my work.

Goodness spreads goodness: Today at Cristo Rey High School in Sacramento, CA, Fr. Boyle came to speak to the students about his work. I, in turn, looked up Homeboy's website and ran across your blog. Both the HB website and your blog were ourstanding for their quality of content, format, and mission.

Keep up the good work! I will log in whenever I can.