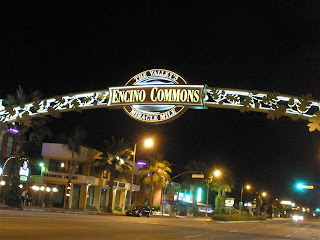 The Militant drove through the Valley, taking the long way back to the compound (as in the surface streets as opposed to the freeway, because that's how the Militant rolls sometimes) and happened upon this shining gateway over Ventura Blvd (pictured left).

O RLY? First off, the Militant couldn't help but chuckle that this part of Los Angeles has taken upon itself to make a comparison to...another part of Los Angeles. Not that there's anything wrong with that, but an illuminated archway over one of the biggest thoroughfares in the area should herald something more grandiose - more original, perhaps? Heck, you might as well go all the way with the hyperbole.

Second, aside from having a landscaped median, there's ironically very little in common with A.W. Ross' (no, not that Ross, but this one) retail thoroughfare over the hill. There's no art museum, no iconic art deco architecture, in fact no art anything (okay, fine, so there's a Color Me Mine down the street). There's no print or broadcast entertainment media companies (though this family in the neighborhood makes the tabloids often), nor are there any sticky prehistoric fossils to be found (and no, this guy doesn't count). Miracle Mile, the Militant's ass!

Further Militant research revealed that this sign was no fluke - it was the work of a local Business Improvement District, which, the Real Miracle Mile doesn't even have (do they even need one if miracles happen there?).

Now, this isn't a gratuitous knock against the 818. The Militant actually digs certain parts of the SFV, and would rather live there than, say Orange County or the Inland Empire (ugh). It's just that the boosters of "The Valley's Miracle Mile" ought to do a little research before making silly comparisons.

The businesses of Encino Commons have every right to beautify and promote their retail district, of course, so here's some alternate slogans they can use:

ENCINO COMMONS - You're Not In Sherman Oaks Yet

ENCINO COMMONS - If You're Reading This, You Should Be Watching The Road

Mick-O: The Militant's seen pictures of it, but not in person. But hey, everyone thought the Eiffel Tower was ugly at first, same with the Walt Disney Hall...

What about "Encino Commons: Bus Emitter on"? :>

MA, do you remember seeing those signs on Ventura Bl.?

What the real Miracle Mile's Wilshire Blvd and Encino's faux Miracle Mile's Ventura Blvd have in common are that they both were first to have Metro Rapid (as seen by the fancy canopied bus stops for both the 720 & 750); what they differentiate at is that Wilshire will someday have a subway while Ventura won't.