The Militant's Refuge By The Sea 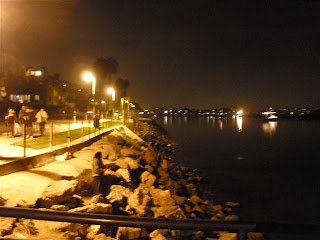 Many years ago, in the early 1990s, The Militant (though not yet realizing he was the Militant, but the same person nonetheless) went through a string of transitions. He had just gotten his driver's license, now freely exploring the same streets of which he studied the Thomas Guide for, yet at the same time he had just broken up with his girlfriend at the time.

The breakup was initiated by her, so the Militant spent many an emo night in despair and introspection. He recalls one fine night driving out to Marina Del Rey to some place by a breakwater, just to shed a tear, concealed under the veil of the night sky.

It's been years since that time and many things have changed in the Militant's life, but the exact location of his emotional refuge had been forgotten over the years.

On Saturday night, while being in the area, he decided to find this place from his past.

He had to play it by ear, by process of elimination. It wasn't near Playa Del Rey, as he hadn't yet discovered that part of town until he started his summer bike rides there a few years later. It wasn't Burton Chace Park, which was in the Marina, but quite a ways in from the sea.

The only place left was the little peninsula where southern Venice Beach meets the northern shore of the Marina Del Rey inlet.

So he continued driving through Admiralty Way and Via Marina, crossing all of the streets named after islands in Asia and the Pacific that served as key theaters of battle during World War II: Palawan, Panay, Marquesas, Tahiti, Bora Bora.

Then came a lighted, empty parking lot at the end of Via Marina, sporting a waterfront walking path that led to the sea.

Eureka. He found it.

One problem, though - parking there is verboten between 10 p.m. and 6 a.m. 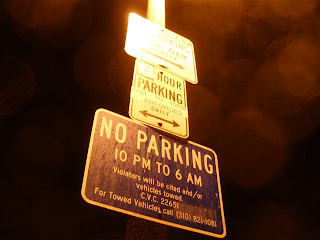 It was 11 p.m. And lo and behold, as if on cue, there was the white Parking Enforcement car, making its vigilant rounds (Which also told the Militant he was in the City of Los Angeles (Venice) and no longer in MDR (unincorporated Los Angeles County land)).

How unfortunate, since the warm night air, coupled with the unmistakable aroma of the sea, was so inviting.

There are many beautiful sights in and around this City, that are especially beautiful after dark, at least in the Militant's eyes -- parks, beaches, mountain roads -- all of which are are officially made unwelcome by ordinance after 10 p.m. The Militant is aware these restrictions were meant to discourage any criminal element from spoiling these places, but must we always live our lives with them in mind? Are there no public places which we can enjoy in a more tranquil, nocturnal state? How sad and unfortunate.

But nothing's gonna stop this Militant. So he drove around for a legit parking space. He eventually found one just a block away, on a sidestreet called Via Donte. No preferential parking restrictions? The Militant is set. 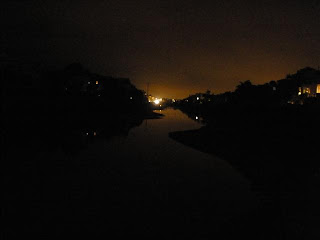 Just a few steps away was the serene southern end of the Venice Grand Canal, also known at this location as the Marina Lagoon. Pitch black, save for house lights and bright illumination emanating in the distance, the Militant heard the calm waters of this lagoon, intermittently troubled by fish or birds somewhere there in the dark. A temporary feeling of envy overcame the Militant
as he wished - for a fleeting moment - that his compound could be located right here (actually not a bad place at all for amphibious combat training...).

He then crossed the street and walked the long jetty leading to the sea, with people engaging in nocturnal fishing activities in the rocks below.
It was an awe-inspiring sight, with the lights of civilization glowing behind and lateral to him (the lights of the Santa Monica Pier and the Hyperion Water Treatment Plant could easily be seen to the north and south, respectively), while at the same time the curious darkness of the ocean horizon lay before him. 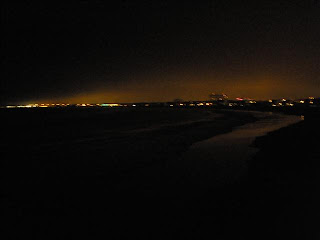 Aside from the visual paradox, it was a beautifully chaotic clash of aural stimuli: The calming white-noise ocean waves from Venice Beach to the right, the even calmer ripple of the Marina inlet to the left, the incessant beeping of the maritime navigational beacon at the end of the jetty ahead, the roar of airliners taking off from LAX from the south and rap music blasting out of the Marina party boat.

Though relatively desolate, the Militant was not alone out there - a mix of strolling couples, people fishing by the beacon (almost invisible under the veil of night save for their glow-in-the-dark bait and the sound of overlapping conversations in Spanish). There was also a group of youths who pulled up on bicycles, and a musician quietly plucking on his guitar, likely also inspired by the locale, who recorded his newfound compositions into his Blackberry.

The Militant took it all in, enjoying this place, the boundary between darkness and light, between calm and noise. It was the perfect place to reflect on life. It was almost as if he was called to return here tonight.

Which also brought up another paradox: Might this public space be as peacefully inviting if those parking restrictions weren't in place and hundreds of people were here at the very same moment? Certainly this would be a very different place, and not as personal and secluded to the dozens who came here on Saturday night (Of course the upscale property owners of southern Venice beach would cry foul if it were any other way).

But reality being what it is, this space remains personal to the Militant, who will no doubt return to this special places of refuge and solitude, whether feeling the highs of awe, or the lows of heartbreak. It's a secret he shares with you. So what do you consider your place of refuge?
Commandeered by Militant Angeleno @ 4:36 AM