The Militant Takes On Metro's Turn To A New Style 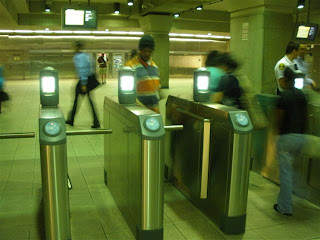 The Militant has been riding (M) Rail ever since the very first day of the Blue Line -- it was a Bastille Day, in 1990. He even rode the Red Line on its 1993 inaugural (heck, he's so militant, he even got to ride it five months before it opened in a private preview tour, in a borrowed Miami heavy rail car, but we won't talk about that in any more detail).

So to see one of these...these...turnstile thingies. Very odd.

He happened upon them on Monday at Union Station, en route to the Dodger game (sorry, no Dodger Trolley, just an operative pick-up). Sure this may or may not have already been blogged about before, but the Militant doesn't care. He wants his say, damnit.

First off, despite his grumblings, the Militant can get used to this new trasnit-boarding paradigm in Los Angeles. But why the dull aluminum finish? Some of its stations are already OD'ed in aluminum already, all the more when an aluminum-clad rail car shoots in, with people riding up aluminum escalators and eventually leaving via aluminum fare turnstiles. Mph. 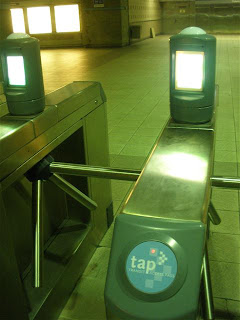 Second, wassup with the triple-spoked turnstile gate? Are we headed into an old-fashioned amusement park? A day at the stadium (well, okay, the Militant was)? They look too east-coast for this Militant. Come on! We're the more modern subway! Why not something quasi-futuristic like the (nearly 40-year-old) wedge-gates of Frisco's BART system? The triple-spoked design is even less fare-evasion resistant, as fare-jumpers who can do under-the-spoke limbo or over-the spoke gymnastic moves can sneak in for a free ride. Um, wasn't that the whole purpose of these things in the first place? To minimize fare evasion?

Third, don't expect to actually use these things for a loooong time. As if the wait for this thing, or even this thing isn't long enough, the new turnstiles, after being installed in all 14 Red/Purple Line stations, still require the universal acceptance of Metro's TAP Card in order to operate. The paper tickets (which obviously lack the RFID chip used to activate TAP) don't seem to be going the way of the mastodon quite just yet. And as for the tens of thousands of Metrolink riders who transfer to and from trains at Union Station (and whose passes are honored on (M) Rail trains as transfers)? No TAP-like card is in the works for the commuter rail system in the forseeable future, nor has the incorporation of TAP as Metrolink fare media even been considered.

The turnstiles currently bear an instructional banner hanging overhead informing paper-ticketed and Metrolink pass-bearing passengers to simply walk through them (as they are currently non-locked) and TAP-bearing riders to TAP anyways, just because that little beeping sound is kinda neat. The Militant predicts we won't see fully-functional turnstiles until we get to ride the subway into the Westside.

So if you're not a big fan of the turnstiles, not to fret, just think of them as aluminum jungle gym equipment in our subway stations for the next decade or so.
Commandeered by Militant Angeleno @ 3:30 AM

Actually Metrolink has been trying to grapple with their solution to the TAP/gating situation for a year.

I know--why Metro during the 10 years TAP was being redied didn't anticipate the problem Metrolink posed is another story.

Last I heard, there as talk Metrolink would sell discounted TAP cards to their pass holders and those would facilitate transfers to the Rail and bus system. Which tells you just how poorly this whole TAP etc. has been handled. UGH!

From what I hear, the plan is to replace the existing paper tickets. Some cities have what can best be described as a paper "smart card", so occassional users and tourists won't have to worry about buying a smart card.

I do agree that fare gates are much cooler than turnstiles, but that's not such a big deal, IMHO.

And Metrolink seriously needs to get with the program. I don't know what their problem has been, whether it's just bureaucratic or what, but they ought to give TAP a chance.

TAP is the future, and both transit agencies and transit advocates need to recognize that fact.

Metrolink is the bastard child in SoCal transit. It's underfunded and overworked. They simply don't have the money to switch to TAP. Metro, along with several other county agencies in the region, invest in Metrolink. They've dropped the ball when it comes to Metro-Metrolink connectivity.

My favorite are the gates which anyone at least 6 feet tall can reach over and open by pressing the bar.
Go see what I mean at Wilshire/Normandie.

Sure it sounds an alarm, so what? Just how quickly do you think it'll take anyone from Metro or LASD to get there? 15 minutes at least?

There isn't anyone who knows more about LA transit than Dana Gabbard.

Such a wonderful! Check our Turnstile gate system

thanks for sharing...
www.golden-slot.com
gclub

Thanks for posting the useful information to my vision. This is excellent information,.
revolving glass turnstiles
boom barriers