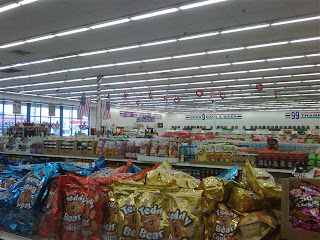 Today, the ninth day of the ninth month of the ninth year of this century, the Militant would like to do a paean to, what else, the 99 Cents Only Stores!

Now, many have derided this noble institution, oft ridiculed by Jay Leno as selling substandard and poorly-labeled products (but karma can be a beyotch, though). Others only go there to buy their beachballs for the Dodger game. And many more have uttered the most-used adjective synonymous with the 99 Cents Only Store: "ghetto."

But there's nothing "ghetto" about a company that raked in $1.2 billion last year and operates a very high-tech inventory stocking and tracking system. Most of all, The 99 is a Los Angeles original, which opened its first store on 6854 La Tijera in Westchester in 1982 and now operates 271 stores across California, Texas, Arizona and Nevada (its corporate HQ is in the City of Commerce).

Okay, granted, there are some items you wouldn't want to be caught buying at The 99. The Militant understands. But there are some items The 99 excels at. Like snack foods, stationery, tools, electronic accessories (Phone charger for 99 cents? Score!) batteries and most of the time, produce (Don't knock the 99.99-cent strawberries! They can be good!)

The commonly-held belief that The 99 sells expired and spoiled goods isn't true. The produce the Militant has bought at the 99 was surprisingly good, and no worse off that what he'd find at Vons. The company interestingly capitalizes on the crass excess and consumerism of this country, and re-sells poorly-marketed products at a more worthy price.

Sometimes there's just too much of an item and and it has to clear out. And sometimes those items are pure gold, literally. Like who knew they printed gazillions of copies of the 1984 Los Angeles Olympics Official Souvenir Program? The Militant got his for $16 back in the day (which is now torn and creased beyond recognition) but found a mint-condition copy, nay, a whole stack of mint condition copies -- for 99(.99) cents!

The Militant, who has friends and relatives in the burbs, nearly all of them mass-endowed, wonders about their utter fascination with Costco. Maybe the Militant might be fascinated by that store, except there ain't any where he lives. The 99 is the inner city's Costco. It's also more transit/bike/pedestrian friendly since the stores aren't just on popular corridors, but you don't have to lug bulk-sized portions home in an SUV. And best of all, there's more brand diversity -- all your merchandise isn't made by "Kirkland."

The company's current slogan is, "The Right Store...Now More Than Ever!" - an obvious reference to the recession. And rightfully so. Can you imagine a world without a 99 Cents Only Store, and all the overpriced crap we'd have to pay for in this economy?

So on this day, 9/9/2009, the Militant toasts his glass of wine Martinelli's Sparkling Apple-Raspberry Cider (at 99.99 cents per bottle), to the venerable, the vital and the homegrown 99 Cents Only Store. Salud!
Commandeered by Militant Angeleno @ 3:52 PM

They sell wiwi pads for dogs. It's fantastic.

The Militant also forgot to mention that even if you bought something at The 99 that wasn't good, you'd only wasted a buck!

Now this blog was Militant-worthy! An inspired commentary. Worthy of a Pulitzer - if they gave them for blogs.

Dedalus1947: The Militant may or may not already have won a Pulitzer!