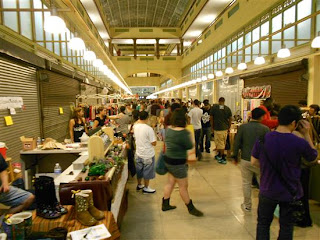 Two years after The Militant first visited the Downtown Los Angeles ArtWalk, he decided to take advantage of the very warm Summer Autumn evening on Thursday night to visit some food tru...er...art galleries. Yeah, that's it.

On his Red Line ride downtown, he eavesdropped on a conversation between a woman and a young cyclist, who was apparently just released from the hospital wearing a splint on his right arm. Apparently he was riding with some friends in Griffith Park and hit a car that stopped suddenly in front of him. His injuries apparently were limited to his arm, but his bike was bent to an unrideable condition. Please tell your motorist friends to be more aware on the streets (and get off that f'ing cellphone)!

His first, er, gallery stop was the Waffles de Liege gallery, where he purchased a delectable...sculpture for $7 created with a grid-baked pastry and painted with frozen flavored milk cream medium. 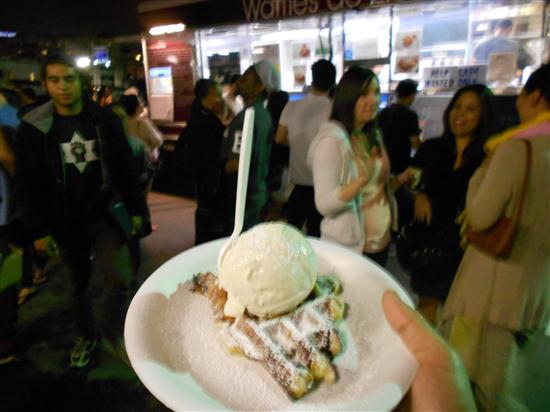 Okay, okay, The Militant did check out some actual art. One of the Militant's fave galleries, Crewest, was closed by the time he passed by, but he walked into various unspecified galleries on Main Street. Just next to the Pacific Electric Lofts Building, there was some commotion on the sidewalk and a sign-spinner bearing an arrow placard, reading, "HIPPOS!"

Sure enough, behind the glass entrance doors on 632  Main Street, there they were...

Click to watch the video of the ArtWalk hippos!
Okay, so it was an esoteric performance art piece, with a quartet of people wearing hippopotamus masks over shirts, ties and slacks, confined to a room with a bed, an adding machine and oscilloscope, cables and toilet paper, among other items. It was so absurd it was awesome. ArtWalk needs more performance art like this! 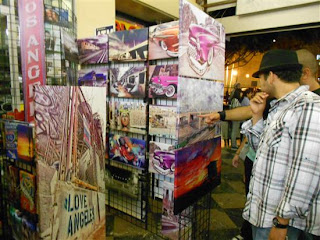 The Spring Arcade building was fully lit inside and was a kickin' bazaar of art, clothing and artisanal (art- is-anal?) food. But The Militant was most blown away by the Angelesque photoillustrations of native Angeleno artist Mitch Reiter (pictured left). MILITANT APPROVED!

A few minutes later, on Spring Street, the sight of hundreds of people matching down the street and the chanting of, "Who's Streets? Our Streets!" grabbed the attention of many. It was the #OccupyLA protestors who came down from City Hall! A bunch of ArtWalkers joined them as well, down Spring to 7th then back up Main again. LAPD officers on foot, car and bike followed close behind, but allowed them to continue as long as they remained on the sidewalk. In all, just like the daily City Hall sit-in, the #OccupyArtWalk march was pretty chill. Hey, demonstration is an artform in itself! 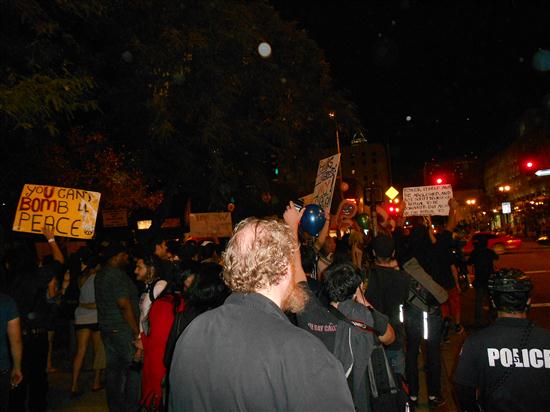 The Militant stayed with the marchers up until the LAPD Administration Building, where he just decided to chill in the great public lawn plaza, while snapping pics of City Hall, The Times Building and the DTLA skyline before hopping back on the last Red Line ride out of Downtown. It almost felt like being in a town square in a different city. Are we there yet? Almost. 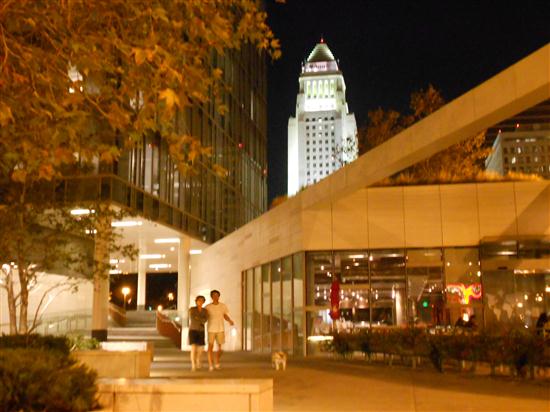 Commandeered by Militant Angeleno @ 2:32 AM