Native Month: In Puvungna, The End Is The Beginning 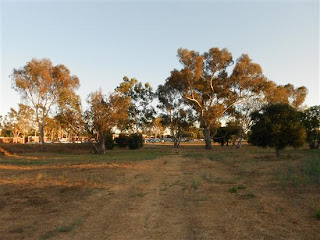 On an unspecified day in September, The Militant hopped on the (M) Blue Line, got off at the Pacific Coast Highway station and rode his bike some four and a half miles east to an area near Bellflower Boulevard and Atherton Street, on the west end of the Cal State Long Beach campus.

Energized by his militant zeal for Los Angeles history, and his newfound obsession with Tongva culture, The Militant, after reading about it for quite some time, wanted to see it for himself, with his own eyes.

The place was the site of the Tongva village of Puvungna, known to their people as more than a village, but a sacred place.

In the 1990s, plans by the university to develop the land into a fast food-laden shopping plaza (a smack in the face on sooooo many levels), drew the ire of the Tongva community.

It was, or at least was close to, the place where ancient Tongva belief taught them the world began.

As it went, their creator god, Quaoar (CalTech scientists were nice enough to name an outer solar system planetoid after him), danced and sang to create a sky god and an earth goddess, which danced and sang together to create the sun and moon gods. Then they all sang together and created everything else. All life began at Puvungna. It was also the birthplace of a Christ/Buddha/Moses/Muhammad- like prophet named Chungichnish, who taught his people the ways of the universe. Furthermore, Puvungna was also the site of an ancient burial ground.

The fight to preserve the land apparently was successful, at least thus far -- the university president at the time promised not to exploit their land - a 39-acre field next to a parking lot consisting of some 40-or-so trees and native plants and grasses.

The Militant arrived there on his bike, and was instantly in awe of the natural landscape that lay before him, even despite the constant roar of traffic and the occasional Long Beach Airport-bound metal bird.

The sight of a ceremonial kutumut pole, greeted The Militant. The was definitely the place he was looking for: 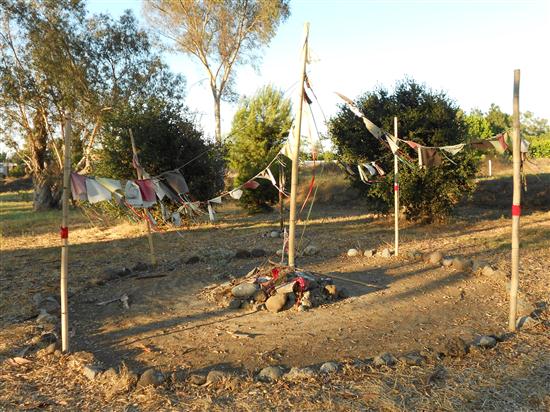 Upon close inspection, pictures of people's ancestors hung from strings attached to the pole, and a stately white sage grew from the ground: 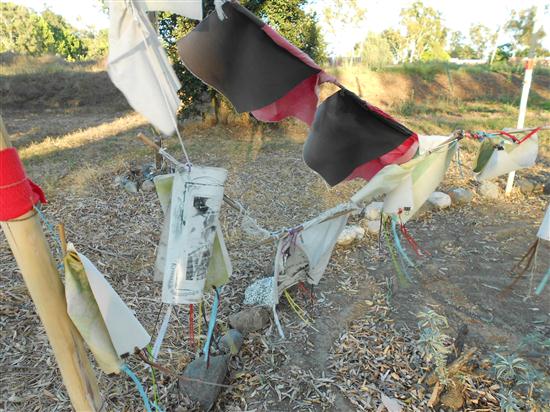 A smaller one nearby had seashells on the ground: 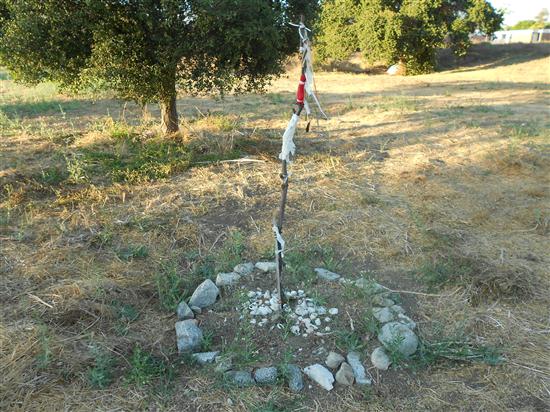 Just to be sure, instead of rolling his bike on the hallowed ground, he chose to carry it, and rested it against a tree.

When The Militant was younger, his family took a day trip to Mission San Juan Capistrano. After having a picnic in a nearby park, when it came time to leave, one of the doors of the family car mysteriously had the inability to close shut. Every attempt to close it failed. This perplexed everyone, until the Militant's mother said, "Excuse me!" in her native language to whatever spirits may be present. After that, the problem door finally was able to be closed normally...[Cue X-Files music here].

Because of that experience. though The Militant doesn't personally subscribe to Tongva spiritual beliefs, he is definitely respectful of them, even to the point of telling whatever spirits might reside there to excuse him,  that he was there to cause no harm or disrespect, and is only there for the sake of knowledge, and, most importantly to impart that knowledge to others, so that they may learn of the Tongva (The Militant is quite sure the ancient Tongva spirits might have a hard time understanding the concept of blogs and Tweets, so a general explanation was in order).

The Militant was quite sure his pardon request went heeded. He was able to observe the grounds undisturbed, and also felt a comforting sense of protection.

Even without a connection to Tongva culture, any undeveloped parcel of land in Southern California is a priceless gem; it serves as a virtual time machine. You can build a Burger King anywhere else.You can even demolish it and build a restaurant that looks identical to the original. But you can never replicate the natural landscape to the same degree.

There is a reason and rhyme to everything. Perhaps it's no coincidence at all that, like Kuruvungna Springs in West Los Angeles, this precious vestige of Tongva culture also exists on the campus of an educational institution. That it's an obvious sign that us 21st Century Angelenos need to be schooled by the Tongva. Many of us are guilty of disregarding or eradicating local history, and the history of the Tongva is the ultimate local history lesson. Buzzwords like "sustainability" and "eco-friendliness" weren't buzzwords for the Tongva, they were their lifestyle.

The Militant may or may not be destined to impart the history of the Tongva people to the blogosphere, but what is important is that you, after learning of it yourself, impart your new-found knowledge to others, and them to others (Insert your favorite '70s TV shampoo commercial reference here).

So perhaps it's fitting to end The Militant's Native Month series here.  The Militant ends his story at the place where the Tongva believed their own story began. And The Militant sincerely hopes that at the end of this particular Native Month adventure, that your own appreciation for the real natives of this land begins.

Brother Your Job has fittingly been done!,At least in My Book!, Or I will say "Infinite Gratitude for the Journey"!, and may the Ancients Bless you with abundant love and courage on your Quest of Great Spiritual Knowledge, so that ALL will live in Harmony and Respectful Understanding of This Great Land Mother Earth of which the caretakers the Tongva once thrived as Beautiful "HUMAN BEINGS".
Thank You Once Again!,
I am Truly Grateful.

I was hoping you would do an Occupy LA post(s). Being the Militant Angeleno and all.

Anonymous 1: It's an honor and a duty for The Militant.

Anonymous 2: Considering America's financial power core is in NYC, any and all of the "Occupy" events outside of Occupy Wall Street are purely symbolic in nature and really have no effect on the financial institutions that they are protesting against. In fact, the Los Angeles City Council gave the symbolic protesters on their lawn the thumbs-up. So there's none of the conflict and drama that's going on in the other coast. It's really a non-event. As far as The Militant is concerned, they can stay as long as they want to at City Hall as long as they keep the place clean.

I always knew the world began in Los Angeles.

I keep thinking that if only I could grasp quantum physics, I would understand God better.