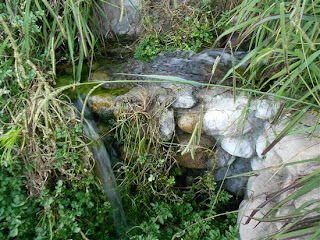 (Yes, it's October already, but seeing as Native Month started on September 5, he's still got the 30-day period to round out, so...let's continue...)

Los Angeles is often described as a "horizontal city," but The Militant actually sees it as a vertical one. No, not necessarily vertical as in high-rise structures, but vertical as in the stacked layers of various histories (Of course, only a militant Angeleno can see them...).

Take for instance University High School, the grade 9-12 campus in West Los Angeles which, since 1924 has produced alums such as Jeff Bridges, Judy Garland, Danny Elfman, Randy Newman, members of The Doors and Tone Loc. So it may or may not be fitting that the man who, in 1989, extolled the virtues of the Wild Thing,  walked from classroom to classroom in the presence of a wild spring.

For it is here on the Uni High campus that a series of natural springs churn out some 25,000 gallons of water daily (the city of Santa Monica once used it as a municipal water source), and have been since the Tongva.

One of the springs is smack dab in the middle of campus. The Militant visited Uni High recently during the afterschool hours and there it was:

While kids practiced soccer and parents stood watch just a few yards away, The Militant reached out his hand to touch the water. Supposedly it's clean enough to drink (The Militant wasn't that thirsty though...). It cascades down a man-made channel, parts of which are littered with snack food wrappers, and then descend into a drain, where it, along with H2O from the nearby Lost Creeks Of UCLA, empty into the Sepulveda Channel and into Ballona Creek.

The other spring is located towards in another part of campus. The Militant, having never stepped foot in this school before, had no idea where it was. But instinctively, he walked eastward, then south, then approached a tree-covered area with a staircase leading down into a parking lot. He kept walking....and then saw this through a fence... 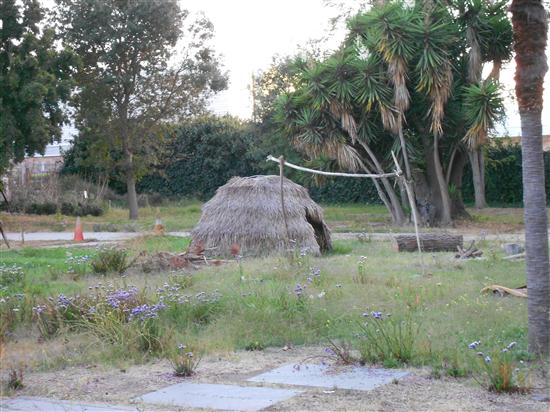 It was a Tongva kiche. He gasped in awe. Did the ancient Tongva spirits lead him there? Was it just his native Angeleno instincts? No one knows for sure, but The Militant was in the Tongva village of Kuruvungna ("The place where we are under the sun.").
The other spring, regarded as a sacred site by today's Tongva descendants, percolates from a small lagoon, surrounded by native riparian trees and plants. The 1769 Portola Expedition stopped by here, and Father Juan Crespi documented the experience (before he started a chain of doughnut restaurants known as Crespi Kreme). The Militant obviously couldn't get to it at this time (and didn't wanna piss off the Tongva spirits by breaking in). 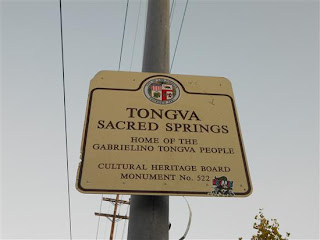 The site isn't that secret, though. It is a designated historic cultural monument by The City after all. And there was an annual Tongva Festival that just happened this past weekend, which The Militant may or may have missed (ARRRRGH! DAMNIT!!!).
The site, on the southeast corner of campus, on Barrington, just north of Ohio Avenue, is open on the first Saturday of each month from 10 a.m. to 3 p.m. where the Gabrielino/Tongva Springs Foundation conducts free tours of the site and opens its small museum on an onsite LAUSD bungalow structure.
As The Militant left the school, he searched the campus for any sort of visual sign acknowledging its Tongva connections. Lessee, there was an Obama mural and a generic "tree of knowledge"-type mural, but nothing Tongvaesque or even anything referencing that active natural water source there. How sad, but not surprising, given the LAUSD's penchant for destroying history over actually teaching it. History - much less local history - doesn't count in standardized tests anyway, so why even bother, right?

The Militant bothers. But more remarkably, the water from these springs still bother to flow.
Commandeered by Militant Angeleno @ 2:58 AM

OK, this makes absolutely NO sense to me. I can just hear them plan this. We want to build a school on this site, but the water that's bubbling up is a problem. "Hey, let's dump it into a storm drain." Problem solved!

Seriously, does it cost less to bring water in from Mono Lake? Ugh!

I went to Uni back in the late 70s and early 80s. The pond was a really cool place to go in the middle of the city to get away from all the craziness. We used to catch crayfish and make boats. It's a shame that the developers want to take a little slice of history away that future generations can enjoy right in their backyard. Leave it alone for all to enjoy.
I have pictures of my childhood taken there. Every time I go back I like to visit the Uni pond.