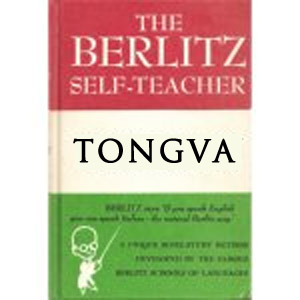 As you may or may not know, over 224 languages are spoken in Los Angeles. So why not learn a little of the very first language spoken here?

The Tongva's language is considered by linguists to be of the Uto-Aztecan linguistic stock, the speakers of which spoke languages and dialects in an area that stretched from what is now Utah to Central Mexico.

But like most indigenous languages in North America, Tongva, was a purely oral tongue, there was no alphabet or written word, and thus no historical transcription the way, say, Greek, Latin, Chinese or Arabic was documented.

During Spanish colonization, they were forced to speak in Spanish, during the Mexican era, much of them adopted Spanish names and surnames, and assimilated into Mexican culture. And when the Red, White and Green flag ceded to the Red, White and Blue flag round these here parts, the poor folks had to adapt to yet another language and culture.

For much of the time since the 1780s, Tongva people spoke their language in clandestine settings.
The last fluent Tongva speaker was believed to have died in the 1970s. Fortunately a few linguistic scholars in the 19th century sat down with some Tongva folk and documented their vocabulary. Today, Tongva descendants have attempted since the 1990s to reconstruct their ancient mother tongue, using words found in songs and common expressions.

The Militant is by no means a linguistics expert. He even has a little trouble speaking the native language(s) of his parents from their unspecified home country. But in doing his militant research on the Tongva the past several weeks, he's noted down some words for all 'yall. So enjoy.

Note: Again, Tongva was not a written language, to any transcription of words into our characters of Roman origin are strictly phonetic in nature. Also, the Tongva nation, though sharing a common culture, displayed inevitable variations in pronunciation from village to village, which were largely independent of each other.

And here's the numbers:

The Militant has yet to find out if there's a Tongva word for "militant," "unspecified" or the phrase, "May or may not," but he'll keep looking...

Commandeered by Militant Angeleno @ 1:11 AM

Will you be leading an introductory class at the Central Library?

Ginny Brideau: Why the Militant would be honore...HEY WAIT, IS THIS JUST A CHEAP PLOY JUST TO GET THE MILITANT TO PUBLICLY REVEAL HIMSELF?!?!?

The vocabulary words you offered were extremely helpful. It is glad the indigenous language of Los Angeles, or should I say "Yaa" in Tongva, is being resurrected. Maybe we should celebrate with some "we-ch," or acorn mush.

One small correction. But I totally back your play. I too am a militant Angeleno, and sorry I didn't see this post two years ago. I also have a deep abiding love of LA prehistory and prehistoric flora and fauna. Here's what I know.

The Uto-Aztecan presence in the LA Basin and beyond, is of a language family called Takic. These languages were probably not the *first* languages spoken here, but the people who spoke them arrived around 4000 years ago, then persisted and flourished here until the missionaries devastated the area.

Tongva/Gabrielino and other Takic languages share a relationship with plains and southwest languages, possibly giving clues to the origin of the Takic expansion into LA, though very little research has been devoted to finding a cause. An anthropologist named Rozaire published a hypothesis in the 60s to attempt to explain the Takic isolates. This theory is referred to as the "Shoshone wedge". It suggest that the Takic expansion moved in from the east, then south, displacing populations in Southern California, leaving the Chumash to the north and the Yumans to the south.

The timing and cause has always been a debatable subject, but on the Channel Islands, there is clear evidence of a population replacement in the skeletal morphology. I'll post a link.

Don't get me wrong - Yaanaga (LA) is Tongva through and through. But it's important to remember that people, when stressed, are highly migratory. Our predecessors came here to settle about 5000-3500 years ago, and about 5000 years after people were already here, just not as established, complex, or populated. With them they brought a rich cultural and ritual system that was unlike anything elsewhere. But it is still enlightening to work out the where, when and why of it. It leads to other questions, and has far-reaching implications for other peoples and the larger picture history can paint. There is also the arguement that if people don't seek those answers, the dominant people will try to write a history that suits them. Native people don't always like or agree with archaeology, but at least it attempts an unbiased history, devoid of agenda - at least not usually political agendas, however prestige seeking some academics can be.

That said, I hope I didn't just take an anthropological poop on the Tongva people's origin mythos. What I don't know a lot about is where the Tongva believe themselves to have come from. Many people belive their place in the geographic context has been there since time began. And no matter what the scientific evidence is, personally held beliefs are important. They have value.