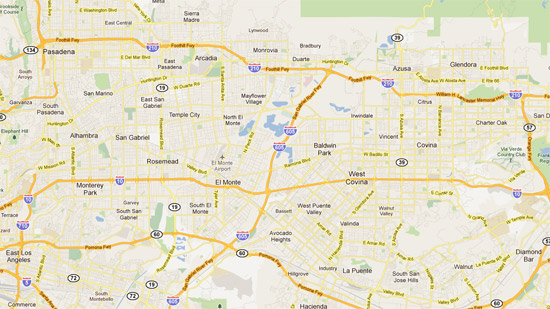 The Militant Angeleno, who brought you Long Beach Week earlier this Summer and Native Week Month back in early September-early October, decided to bring it to the people to decide the theme of his next topical "Week" series.

Offering a choice between The San Fernando Valley, The San Gabriel Valley, The Westside, The Eastside (the real one, not "that" Eastside), South Los Angeles, The South Bay and The Inland Empire, The Militant put it to an online poll on This Here Blog from October 11 to October 24.

Welp, The People Have Spoken. San Gabriel Valley has led the poll results from the get-go and never faced a real contest. Of course, some of you out there who are either longtime SGV residents or SGV natives voted enthusiastically, as are some who just wanted to see an 'SGV Week.' 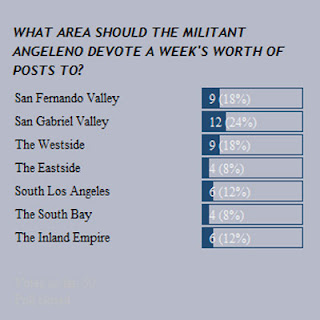 The SFV and The Westside were tied for runner-up, and South Los Angeles and The Inland Empire both drew for the bronze medal. The Eastside and The South Bay also were neck-and-neck for a distant fourth place.

So there you go, it's official now. Look for The Militant Angeleno's San Gabriel Valley Week sometime this November (after The Militant does some additional militant research and plans his fact-finding missions accordingly)!

A couple things before we move ahead: The Militant's SGV Week series will not be all about the following:

- Pasadena. The Militant digs The 'Dena and all, but there's so much more to the SGV than Pasadena. Unfortunately, that's as far as Metro Rail goes in the SGV, so there's gonna be some Metrolink trips racked up soon (Maybe a good chance to try out their new bike cars).

- Chinese Food. Again, The Militant loves him some dimsum, boba joints, tofutarian and Szechuan, but Chinese Food in the SGV has been done. The Militant is all about uncharted territory and the road less traveled, aite?!

To be perfectly honest, Though The Militant knows a few interesting things about the SGV, he obviously doesn't know it as well as the city of Los Angeles proper. But he's totally down for the adventure and will undoubtedly learn a thing or two about the SGV as y'allz will. Soooo, if any of you SGV operatives want to drop some tips or recommendations off to The Militant, he may or may not welcome them! So send them via email to militantangeleno@gmail.com!
Commandeered by Militant Angeleno @ 12:50 AM

Glad to see I voted for the winner. But why I picked the "other" valley I couldn't tell you.

I hear there's some history out towards Sierra Madre and San Dimaa (I guess alot of those foothill communities), but I really don't know much into the specifics.

Come to Covina, there is lots of history here. You can visit the old firehouse and Jail just behind city hall. Covina was the epicenter of lots of Citrus groves at the turn of the century.

You might recognize this town as it was used in the filming of Roswell tv show.

I was one of those who voted for the SGV. Some suggestions: Memories of El Monte and Art Laboe playing at the El Monte Legion Hall; Turnbull Canyon and the spooky stories about it; the Hsi Lai temple.

I'd also pose the question: is the SGV and an extension of the Eastside?

Could we expect a San Fernando Valley Week sometime in the future?

Vicente A: You may or may not!

Can you also give a Militant-approved definition of the borders of the SGV. Like, is Pomona part of the SGV? Montebello? Gimme some clarity Militant Angeleno!!

looks like you love los angeles, i work here as well, in it consulting los angeles and love this place