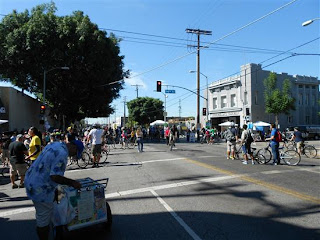 Well oh well, wasn't that another great CicLAvia Sunday? Certainly the next few days will bear witness to countless blog posts, Flickr pics, YouTube videos (timelapse or otherwise) and the overall coming-down-from-that-CicLAvia-high feeling, at least until next Spring.

This time around, the route got extended some two and a half miles. The Militant, of course, fired off another Epic Militant CicLAvia Tour post, which you all may or may not have read (or downloaded). But on the route, we saw the first diversions from the classic east-west route that has been around for a year.

The corner of Central Avenue and 14th Street was alive for all of Sunday's all-but-too-short five hours of CicLAvianess. The African American Firefighter Museum  set the stage (both literally and figuratively) for the new southern terminus of the event, with live bands playing funk, hip-hop and reggae music.

The museum itself was open for exhibition and tacos, tortas and aguas frescas were hawked just outside the building.

But that was actually beside the point. One of the emcees onstage said on the microphone that this was a "Historic day for South Los Angeles" by co-hosting CicLAvia for the first time. All this being said while a DJ played Ice Cube's Isley Brothers-sampled laid back hood anthem "Today Was A Good Day." Folks, that was a powerful moment - people were proud of their community and were showing off that pride to visitors, perhaps for the first time. A pack of gleaming chrome lowrider bicycles - as ubiquitous to South Los Angeles and the Eastside as fixies are to "The Center" of town - was proudly being paraded about by Southside locals. 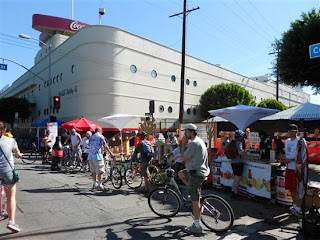 Even the local corporate presence represented. The nautical-themed Coca Cola building (pictured left) surprisingly yielded to common sense and had its marketing troops hand out free Coke and Powerade samples to CicLAvia participants - a smart and logical move on this warm fall day. CicLAvia wasn't some pesky event that inconvenienced their employees, but became something they actively got to be a part of.

On the downside, whether it was out of unfamiliarity, fear, or the fact that very few two-wheeled CicLAvia guests actually knew how to navigate the makeshift roundabout established at 7th and Spring, but there were far fewer people headed south than going on the classic route. Granted, there were long stretches of nothingness, like the industrial dead zone between The Fashion District and the Piñata Distrist by Central and Olympic.

So maybe the new southern spur doesn't have anything as picturesque (ship-like soft drink factory aside) as The view from the 4th Street Bridge or City Hall or the LAPD building with the City Hall reflection on it, but CicLAvia is meant to have us discover our city, and discovery awaits. At the Southside terminus there was an organization called ParTour that encouraged participants to sign up with their mobile phones and photoblog/tweet places along the CicLAvia route in South Los Angeles to advocate extending the route farther south. Only problem, aside from the Coke building and the firefighter museum, there wasn't much of a CicLAvia route in South Los Angeles as of yet...also some of the instructions were confusing. Nonetheless, The Militant wholeheartedly supports their efforts in extending the route, hopefully to historic Central Avenue (live jazz along the route please?) and even down to the Watts Towers. Let's face it, the CicLAvia folks and the City are able to give us this much during a budget crisis. Just think of what is possible when we no longer have a budget shortfall? A SFV CicLAvia is already being planned for next year (Which means another Epic Militant CicLAvia tour is forthcoming...).

As for the northern spur...uhh...The Militant unfortunately didn't even have time to get to that! CAN WE HAS LONGER CICLAVIA HOURS? KTHXBAI.

Darnit, I missed you. I took the Metro down to Hollenbeck Park and walked back to Grand Central Market. What a beautiful day, I've never seen so many smiling people. The Catmommie does not own a bicycle (she is more chicken than cat) but she has decided to rent one for April 15--walking was fun, but I'll see more on a bicycle.

Oh hell, now you've got me talking about myself in the 3rd person.

Catmommie: Glad you enjoyed CicLAvia! Walking is just as good! One of these days, the Militant will attempt to experience CicLAvia WITHOUT a bike! :O

LOL, The Militant doesn't expect others to talk about themselves in the third person though - just himself. So don't feel pressured at all.