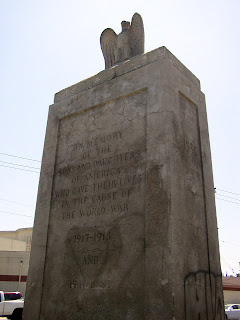 Standing at the southwest corner of Adams Blvd. and La Brea Ave. on a nondescript and lightly-landscaped traffic triangle is a concrete pillar, some 15 feet high and topped by an eagle, largely ignored by the cars, trucks and buses that drive right by every hour, most of them crossing town to or from the Westside, going to or from LAX via the "La Brea-La Cienega Freeway" or heading to or from the nearby Santa Monica Freeway.
But this pillar, obviously neglected and weathered over the years by sun, pollution and graffiti has some significance behind it -- it is Los Angeles' World War I (and II) memorial.
Erected in 1936, this memorial was originally established to honor the fallen from "The World War" of 1917. The inscription reads:
IN MEMORY
OF THE
SONS AND DAUGHTERS
OF AMERICA
WHO GAVE THEIR LIVES
IN THE CAUSE OF
THE WORLD WAR

Obviously the last two lines were appended some time after 1936 when there was more than one of these "World War" things. Also, the fact that there's at least two feet of blank space below the last two lines makes you wonder if this thing could ever get updated yet again. 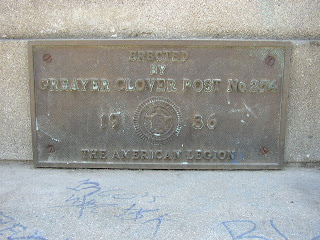 The memorial was built by The American Legion, as indicated by a small bronze plaque at the bottom (pictured right). It credits the Legion's "Greayer Clover Post No. 254." Greayer Clover, for some of you who know your history, was the namesake of Santa Monica's Clover Field, a.k.a Santa Monica Airport (hence "Cloverfield Blvd"). Clover lived in Los Angeles since youth and was killed in an air accident in France during World War I. Clover Field was originally a U.S. Army air field that went civilian after World War II. 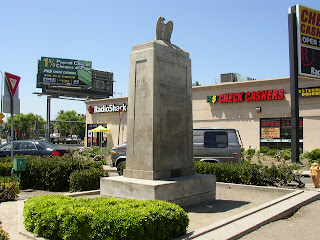 In 1936, this section of Mid-City, just west of West Adams, was much more tony; instead of being populated with flammable warehouse spaces used to store movie sets, the neighborhood back then, three decades before the 10 Freeway sliced it latitudinally, was a more pedestrian-oriented, self-sufficient neighborhood bearing institutions that the neighborhood lacks today. The Fais Do-Do nightclub, which stands just a few blocks west, was a bank (First Citizens Savings Bank and Trust) back when this memorial was built. According to Fais Do-Do's "About Us" page:

"...the architecturally historic landmark that now houses Fais Do Do was constructed in 1930 at the height of the Art Deco period in Los Angeles. As Los Angeles spread west, eastern industrialists, silent filmmakers, and other early hipsters took over the tiny Mid-City area which soon became known as the Sugar Hill District."

Commandeered by Militant Angeleno @ 12:54 AM

There should be a monument dedicated to those who gave their lives in the Clone Wars as well as those brave jedi lost after Order 66 was executed.

Ditto to what Mike said. I had no idea about this monument and look forward to paying it a visit.

This reminds me of a plaque installed in memory of a murder victim near where I lived during junior high in Hollywood. I don't even know if it's still there, but now I'll have to go check and document it.

I will try to visit this monument in March when I am back in Los Angeles. I will put it up along with any others I find during my stay at http://sites-of-memory.de.

Anybody know of any other war and/or Holocaust or other memorials in and around Los Angeles?

All these years i had no clue, and i lived one block away.Now that i know i will pay my respects.CRAZY DOC MOTA USN