Do not adjust your set (monitor?), the Militant's recent adventure around town did not involve a bicycle, bus or rail vehicle.

Yes, the Militant drove around town.

But of course, when the Militant drives, he drives efficiently, planning trips accordingly so as to waste as little gas, money and time as possible.

The Militant headed out on Saturday morning to Burbank, where two of his Valley-based operatives, who had been in a relationship for several years, finally tied the knot in a nice ceremony. So the Militant had to put his camouflage fatigues away for the day and don a sharp suit - which he bought at the Fashion District a couple years ago - for the occasion. You just had to see it (of course, you probably can't). The reception took place in Downtown Los Angeles, so the Militant took care of a few errands while en route.

First was downtown Burbank, where the Militant parked on the street and made a quick automatic withdrawal of his Militant funds. The Militant also realized he hadn't yet bought the wedding present yet, but never fear, he was able to walk to a nearby store where he was able to purchase the present. All of this convenience saved him the task of driving to separate places, hunting for parking at those destinations and stopping and starting his car several times. 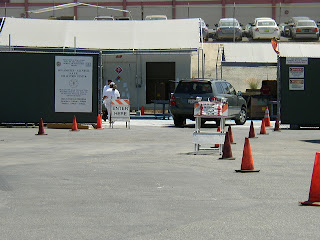 Next, the Militant made a quick trip to a City of Los Angeles Bureau of Sanitation S.A.F.E. (Solvents, Automotive, Flammables, Electronics) Disposal center (pictured right). Say what? See, several days ago the Militant's cathode ray tube-equipped home television set - purchased in the late 1980s - passed away. After it was subsequently replaced with a brand-spanking-new LCD HD television set (HD TV is like, wow...), instead of leaving the deceased television on his curb (like many people do) and further adding to the blight in his neighborhood, he dropped it off at a S.A.F.E. center where they happily accept old electronics and toxic materials for proper disposal or possible recycling. If you are a Los Angeles city resident, please dispose of your old broken crap or motor oil here, and tell your friends about it. This particular center, located right at the Los Angeles-Glendale city border across the 5 freeway from Griffith Park, serves the Hollywood and Northeast Los Angeles areas, and is accessible from the Edenhurst Ave "exit" off of the 5 Freeway Colorado Blvd. on/off ramp. And yes, this meant that, due to the carefully-planned trip, the Militant drove to his friends' wedding with a dead television in the backseat. But hey - the Militant is always prepared...or at least most of the time. 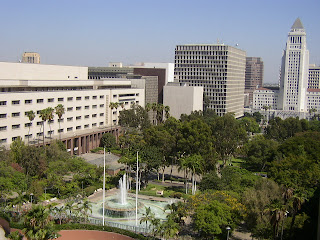 So after the S.A.F.E. center visit, it was direct to Downtown via the 5 and 110. The newlyweds had their wedding reception at, of all places, the Music Center, which sports a few banquet halls within its structure. Even during a few hours of dancing, drinking and celebrating the beginning of the bride and groom's new life together, the Militant got to spend a couple minutes to enjoy the view of the Civic Center from five stories up (pictured left). The Grand Avenue redevelopment project intends to put a large public park in that area, stretching from the Music Center to City Hall. The Militant had to leave the ceremony a little early to make a work assignment in the Jefferson Park area, which he got to on time via the 110 and the 10.

Planning your car trips carefully saves you from much hassle - even though you're still on the road, by efficient planning of automobile trips, it saves you from being on the road when you really didn't need to be.
Commandeered by Militant Angeleno @ 1:57 AM