A Deflated Change in Plans 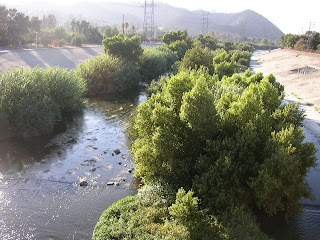 The Militant has plans. Future plans. Urban plans. Master plans. The Death Star Plans. Plans for his Militant revolution. A Man A Plan A Canal Panama Plans. One can say the Militant is a planning freak (the Militant is not much of a party planner though). But as life runs its course, plans have to change.

Wow, that all sounds real heavy. No the Militant isn't hanging up his combat boots (the Militant has only just begun!), but he had to change some minor plans today.

It all started after the Militant had a nice hour-long talk with the head of a local non-profit arts group in his community, having a nice chat about the community, and sharing with each other our own plans (see? There you go!) for it. The Militant had to ride on over to the AWV for an appointment. When it was done, after, snapping pics of the River (pictured above), the Militant had planned to bike on over to Little Tokyo via Frogtown, Lincoln Heights and Chinatown to do more research for Part 3 of his Ethnic Iced Dessert Quest, and maybe check out a little bi-monthly talent show there as well.

Well something happened after the Militant crossed the bridge over the Los Angeles River where Riverside Drive suddenly becomes Figueroa: The Militant's rear bicycle wheel felt suddenly uneven and he dismounted immediately. There it was.

Not just a flat, a "Your inner tube has less air than the vacuum of space and your rear tire is literally falling off the wheel" kind of flat. And that can only mean one thing:

The Militant knows he is being under attack. The East Coast media powers are out to stop him, at all costs, and have sent their expatriate minions "out here" to stop the Militant. So they scored a microscopic victory against me by finding a way to deflate my rear tire, perhaps via the use of some laser device. There was absolutely no evidence of debris or sharp objects stuck in my tire, as there normally is when the Militant hits a flat (as Will Campbell knows, the Militant is phobic of riding on the Los Angeles River Bike Path for fear of getting puncture weeds stuck in his tires). The Militant was lucky, as this happened just after he had crossed the Los Angeles River, which meant that he had entered The Real Eastside, and that he knows that those who want to stop the Militant never venture into The Real Eastside, so that is probably what saved his front tire from destruction. 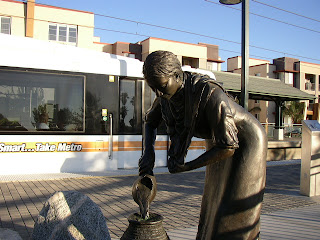 The Militant called roadside assistance at around 6:30 p.m., who informed him there was a bicycle shop further north on Figueroa by York in the Highland Park/Eagle Rock/Garvanza area but the Militant didn't want to take the chance of arriving at a place that was closed for the day. So he lifted the rear wheel off the ground and manually walked his wounded chariot a few blocks where the (M) Gold Line Avenue 26 station (pictured left) stood. Pure gold. The Militant rode the train to Union Station where he transfered to the (M) Red Line and on to the Vermont/Beverly Station. While on the train, the badly-flattened tire was an easy conversation starter from fellow passengers, though the Militant had his eyes fixes on a real hot looking Angelena sitting in the middle of the subway car (Damn, she was hot...). After alighting the train and hopping onto the elevator, a quiet, unassuming , but still cute Angelena asked him questions about his bike and bicycles in general. The conversation continued on the mezzanine level and on the second elevator to the street. The Militant didn't hesitate to give her his contact info, you know, just in case, she had more questions about bikes. She may or may not call him back, but hey...the interesting things that can happen outside the confines of a car.

After schlepping his bike on the sleek articulated 204 bus, he brought it to his mechanic where he not only replaced the tube, but got new road wheels, also bumping unexpectedly into a few of his operatives, of all people.

You know the city well enough, and it becomes a small town.

So changing one's plans isn't necessarily a bad thing, it can pave the way for good or better things. The only thing that really matter in the end is...that the Militant still came away with something to wrote for his blog entry for the day.
Commandeered by Militant Angeleno @ 2:21 AM

Do you carry a patching kit with you? They sell tiny ones at like K-Mart for two dollars.

Praise be that you didn't flat on the river, otherwise there'd be no chance in hell of ever seeing you on it. Not that I've ever seen you. Just saying.

And frankly I'm surprised the Militant is not entirely self-sufficient in terms of carrying a pump and patch kit or spare tube. Personally I don't leave home without them.

LABG & WC: The Militant hangs his head in shame. A patch kit the Militant shall carry for here on after.

So Will, like the Militant said, he now has road tires on his 26s. Los Angeles River, look out for the Militant!

Those fresh treads would go great with the route we've planned for tonight.

We're gonna pay a visit to MacArthur Park's Levitt Pavilion for a bit of the free concert there and then head south for stops by those Jackie Robinson residences I found out about near USC. The Militant or his covert operatives would be most welcome!