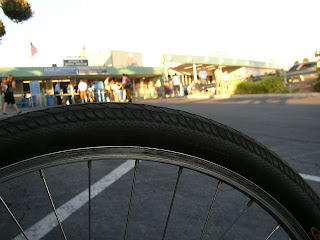 Though the Militant is an unabashed Dodger fan, due to his Militant schedule, he hasn't had the chance to attend a game at The Stadium since Nomar Garciaparra Bobblehead Night in late April (where they not only lost, but to the hated Frisco Gints, and the bobblehead's namesake made the final strikeout...but hey, free bobblehead, right?). In fact, the last time the Militant was at The Stadium, it was for some rock concert.

So when a member of the Militia gave away an extra free single Top Deck ticket to the Militant for Tuesday's game, the Militant was so there. Besides, so far the Militant's home game record has been 0-2, devoid of the experience of seeing a Takashi Saito fist-pump and hearing Randy Newman blaring in the stadium speakers. It was time.

There was a victory tonight, but not just a Dodger victory. A Militant victory.

This being the first Dodger game attended since the Militant Angeleno went to press, er, web, the Militant wanted to do something, well...Militant.

So he rode to The Stadium...yep, Militant style.

It took him about 30 minutes to travel the 3.5 miles from his compound to The Stadium. Yes, he rode down Sunset. Yes, he biked up the hill on Elysian Park Ave. Yes, he rode through the parking gates.

Once inside, one of those Standard Parking folks tolk him to walk his bike. (Damnit...) But the Militant politely complied. After locking his bike against a light pole near the Top Deck turnstiles, a fellow Dodger fan asked the Militant, "Did you have to pay to get in?"

"Because my daughter lives real close to here, maybe I can ride my bike up here myself!"

"Go for it," the Militant replied.

The Militant then told him about his plan to one day have at least 30 two-wheeled Dodger fans take to the stadium on bicycle and purchase game tickets at the group rate (30 or more). Also, in a polite, but still no less Militant gesture, the bicyclists would chip in about 50 cents each so all bicycles would park in a single $15 automobile parking space.

The Dodger fan told him that he would definitely want to be a part of that.

Since the "parking" was free, and the ticket was free, the only cost on the Militant's behalf was on a large drink and a Saag's Louisiana Hot Sausage (the Militant loves Dodger Dogs (grilled only), but the Louisiana dogs are just, well, as they say in that state, lagniappe) - together, $12.50. 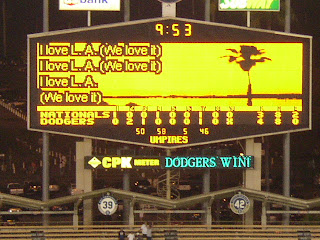 The game itself was a pleasurable experience, the view from the extreme third-base-side of Top Deck wasn't that bad, the moderate attendance of 49,698 left a lot of room for the Militant, who was surrounded by a family of three, a group of mostly Latino and black friends enjoying a game together (the racial tension-seeking mainstream media might wanna take a look at this for a change...), a quartet of hipsters who only stayed for about three innings before leaving and one real (quiet) drunk guy who spent most of the game slumped over on his seat, asleep. Yes, there was the ubiquitous 99 Cents Only Store beach ball thrown around our section, but no wave tonight (not even a slow-motion one).

After treating himself to the Saito mound walk (and accompanying graphics), the Saito strikeout, the Saito fist-pump and the Randy Newman tune, it was time to ride...

As the Militant unlocked his bike, he overheard the comments:

The comments mattered to the Militant like Eric Gagne still matters to the Dodger bullpen. He set his cellphone stopwatch feature on...

Zooming past the long, slow queue of cars, the Militant zipped down the hill like ice cream down a cone on a 110-degree summer day. After he cleared the Sunset Gate, he checked the stopwatch. The time it took to leave the parking lot:

Now it was time to head down Sunset. By the time the Militant crossed Echo Park Ave., he had already left any stadium-related traffic behind. He zipped through Silver_Lake with ease.

By the time the Miltant arrived back at his compound, he checked the stopwatch counter:

If he were in a car, the Militant would still be in the Stadium parking lot, listening to the first callers on KFWB's Dodger Talk. So yes, people, it can be done. Walter O'Malley's automobile-accessible cathedral of baseball became little more than a mild uphill challenge on a bike, not to mention a good way to work off those hot dogs.

If you were at the Ravine, waiting to slowly funnel out of the parking lot, and saw some lone, daring bicyclist zipping past you...well, that may or may not have been the Militant. But more likely the former.

Vinny, please do the honors:

Ah, that's nothing! I've walked to the Stadium twice (well, took the bus & then walked from Sunset). And I was still out of there long before any one stuck in a car would have been.
And the former Brooklyn Bums won tonight too!! And Arizona lost! Fingers crossed.

I took my land speeder and used the Locals Only exit. I was back at the Jedi Temple around the same time you got back to the compound. :p

Speaking from the perspective of riding shotgun in the vehicle we left the stadium in last night, I'm very jealous. From the G lot we actually got out of the place quite smoothly quickly onto Academy road, but then it was a slow crawl around to Scott and over to Glendale Boulevard.

Great post. Your idea for getting together with others for a group rate and to take over a packing spot sounds like fun!

Awesome. Gotta love weekday games at Chavez Ravine. My last one I took the Gold Line down and walked up from Chinatown. I look forward to doing this exact bike ride when I'm over on the east side next summer.

Fear not Militatant padawan, Locals Only will remain for Locals Only. Nobody nows the the deepest secrets of the force both light and dark side as I do.

Yeah I know, I remember seeing this!