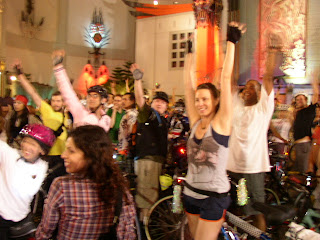 Some 100 cyclists rode the streets of Los Angeles on Friday night to partake in Ride-ARC's "Tourismo!" ride that playfully took the mostly- native Angeleno riders on a 30+ mile tour of tourist traps, historic places and facades seen on movies and television, stretching from Hollywood to Beverly Hills and back.

Starting at the parking lot of Mayfair Market on Franklin Avenue, the ride went up the steep inclines of the Hollywood Hills, stopping by the Frank Lloyd Wright-designed Ennis House, freewheeling back downhill right below the Griffith Observatory, heading due west to the Capitol Records Building, then down the Boulevard to the front of Mann's Chinese Theatre (pictured above), where bicycle tires rested on the footprints and signatures of stars as the pack posed for a group photo, which was a genuine "WTF?" moment for the tourists who were there. The ride also passed by Fairfax High School, Melrose Avenue (which is now home to the largest concentration of nonfat frozen yogurt franchises in the entire world, the Militant kids you not) to Paramount Studios. The bikes also meandered through the winding concrete path of Pan Pacific Park, taillights blinking like fireflies, then up to The Grove (pictured below, where the pack jokingly sang "Happy Birthday" to a paranoid security guard -- remember, Caruso's Main Street is private property), through Beverly Blvd. to Beverly Hills. The ride continued past the swanky celeb-patronized shops of Robertson, the luxury car dealerships of Wilshire, Rodeo Drive, the Sunset Strip and back. Famous TV/movie houses were seen, such as the Halloween house on Orange Grove Ave, the Cunningham residence from the '70s TV series Happy Days, (located on Cahuenga Blvd. just blocks south of where the series was filmed on the Paramount lot), and even stars' homes like Bugsy Siegel's house in Beverly Hills and yes, even Paris You-Know-Who's house on King's Road, just off of the Sunset Strip (ironically, behind a Hyatt Hotel). 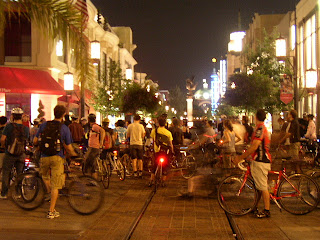 While many folks would rather party on a Friday night, this was a party where locals got to pretend to be tourists, and Alex, the ride coordinator, gave factual and historical information during the tour's stops. Speaking of party, there couldn't have been a more perfect juxtaposition of the rich and non-rich, the glamorous and the practical and the fake and the real, especially when the pack infiltrated the parking lot next to The Avalon, with helmeted riders literally right next to the dressed-to-impress crowd waiting to get inside the club. The scene was even repeated around 2 a.m. when the riders passed clubgoers leaving Sunset Strip spots. Even when the ride passed through normally tranquil, quasi-private, secluded residential areas in Los Feliz or Beverly Hills, it was a clash between two seemingly diametrically-opposed worlds. For this Militant, it was awesome.

The Militant also enjoyed this ride because of the crowd - a much more diverse pack of riders this time, and 100 being the right size for a pack. The Militant also ran into friends both old and new, such as fellow local blogster supreme Will Campbell, who wrote his own account here (Note: He has signed the Militant's non-disclosure forms under penalty of perjury so please do not hound him with queries regarding The Militant's identity); "J," a dude who the Militant met on Franklin en route to the starting point; "A," who shares a mutual friend with the Militant in a certain local foodie blogster and "M," an Angelena on an electric bike which the Militant struck up a conversation with and who was struggling behind the pack in Beverly Hills pedaling on the heavy bike (that battery pack weighs a ton) -- with under-inflated tires. The Militant offered to switch bikes with her and ended up riding off with her the rest of the way (The Militant is not just an officer, but a gentleman as well...).

Ride-ARC is where it's at. The Militant now looks forward to the first Friday of the month.
Commandeered by Militant Angeleno @ 10:53 AM

It is rather interesting for me to read this article. Thanks for it. I like such themes and anything connected to this matter. I definitely want to read more

Excellent post. I want to thank you for this informative read, I really appreciate sharing this great post. Keep up your work.