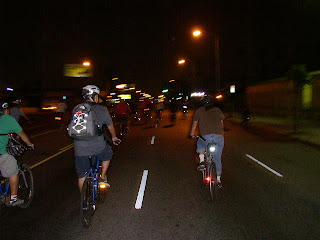 This is the part where the Militant talks about his recent bike ride, and those of you who never ride bikes or ride one every once in a blue moon while it sits there gathering dust, rust and cobwebs in your garage decide to move on and read another blog while those of you who do (or desire to) read on.

But in Friday night's episode of Midnight Ridazz, (billed as "The Clown Ride" where participants were encouraged to dress up as clowns...the Militant opted not to), though not as crazy-go-nuts in terms of participants as last month's Echo Park-to-West-Adams-to- Boyle-Heights-to- Downtown- and-back ride, seemed to include a newer, more diverse crowd, which also included select operatives of the Militant as well as members of his militia. Though it was the first time for most of them, it was great to break them in -- after all, urban combat is no walk in the park. 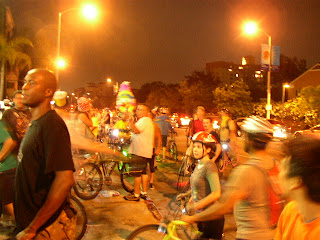 The ride both started and ended in close vicinity to the Militant's compound, which headed down Vermont to Wilshire, then down Hoover to the USC area, where the ride took a break at the parking lot of the University Village shopping center, a.k.a. "UV" (Bruin-types would call it "USC's lame excuse for a Westwood Village," but let's not go there). Riders were treated to an impromptu demonstration by a few two-wheeled tricksters showing of their X-Games-like extreme biking stylee. The ride went on through Mid-City, through the Miracle Mile and onto Pan Pacific Park (no infiltration of Carusoville's Main Street this time). For some of the riders, the ride through the park gave a semblance of an amusement park water ride where riders got a quick shower of water via the park's grass sprinklers. Then it was on to Hollywood, finally ending at the (M) Vermont/Santa Monica station in E-Ho, where many of the riders had a post-ride afterparty at El Gran Burrito.

Before the ride, while the Militant was inside the nearby Drugstore Formerly Known As Thrifty, a.k.a. Rite-Aid (the classic example of East Coast colonialist domination), the curious were asking the helmeted ones questions like, "What is this all bout?" and "Is this a monthly ride?" and receiving answers in the form of the Midnight Ridazz website. Whenever people in cars, pedestrians or waiting bus riders ask the riders, "What is this?" the riders would shout, "MIDNIGHT RIDAZZ!!!" which always follows with an enthusiastic battle cry/cheer from fellow ridazz. The word is spreading. Before you know it, some of the Entourage dudes will go on a mass bike ride in an upcoming episode and bike riding will be the new "In" thing for Los Angeles as dictated to you by the East Coast-controlled mainstream media.

But hey, whatever it takes.
Commandeered by Militant Angeleno @ 2:19 PM

Westwood is for babies who can't be more than five feet from a freaking mall to survive. I hate Westwood Village with a passion. Ugh.

The UV rules and the International Food Court is the greatest place for tasty food, ever. Go there and try the food--the Health Hut's my personal favorite.

And I doubt there's a better theatre for cine-smash than the UV theatre, except perhaps that theatre in downtown under the Mariott.

Awesome blog.. Thank you for sharing this information.